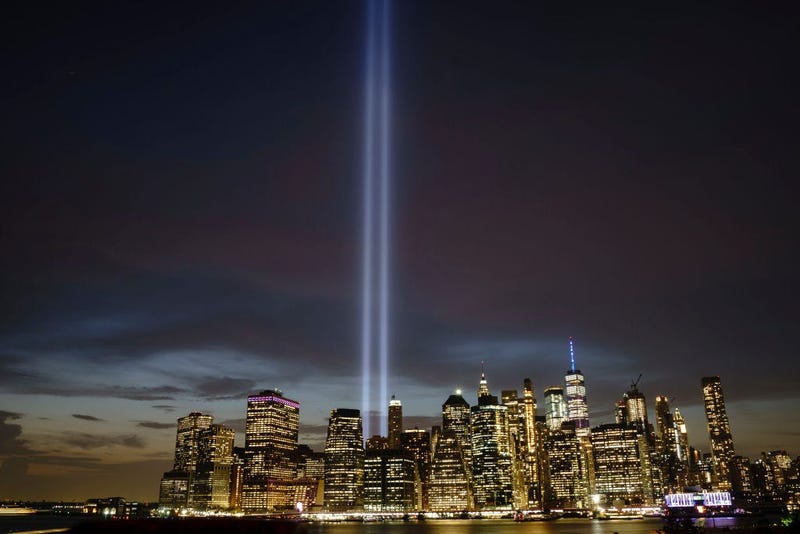 NEW YORK (WCBS 880) – Gov. Andrew Cuomo said Saturday that New York state will provide health personnel and supervision so that the 9/11 Memorial & Museum can safely display the Tribute in Light this year—days after the annual commemoration was called off because of concerns about the coronavirus.

In a statement announcing the plan, Cuomo said the tribute was especially important amid the pandemic. The 9/11 Memorial and Museum had announced on its website Thursday that the Tribute in Light was canceled this year due to coronavirus concerns.

"This year it is especially important that we all appreciate and commemorate 9/11, the lives lost, and the heroism displayed as New Yorkers are once again called upon to face a common enemy,” the governor said. “I understand the Museum's concern for health and safety, and appreciate their reconsideration. The state will provide health personnel to supervise to make sure the event is held safely while at the same time properly honoring 9/11. We will never forget."

NYS will provide health personnel & supervision so that @Sept11Memorial can mount the Tribute in Light safely.

I am glad that we can continue this powerful tribute to those we lost on 9/11 and to the heroism of all New Yorkers.

"For the last eight years the 911 Memorial & Museum has produced the Tribute in Light and we recognize the profound meaning it has for so many New Yorkers," Greenwald said. "This year, its message of hope, endurance, and resilience are more important than ever.  In the last 24 hours we’ve had conversations with many interested parties and believe we will be able to stage the tribute in a safe and appropriate fashion. I want to particularly thank Mike Bloomberg, Gov. Cuomo and the Lower Manhattan Development Corp for their assistance in offsetting the increased costs associated with the health and safety considerations around the tribute this year and the technical support of so many that will enable the Tribute to be a continuing source of comfort to families and an inspiration to the world going forward."

The announcement from Cuomo comes a day after the Stephen Siller Tunnel to Towers Foundation announced it would step in to make sure the annual tribute happened on Sept. 11.

After thousands of people signed a Change.org petition calling on Cuomo and Mayor Bill de Blasio to allow the tribute to continue next month, Frank Siller said the Tunnel to Tower foundation would set up its own light memorial near the World Trade Center location.

“We're going to make sure that those beautiful lights that represent the loss of life of 2,977 brave souls 19 years ago, they will be illuminating the skies on Sept. 11 this year to make sure that we pay tribute to all those who perished that fateful day,” Siller said. “It's going to be on Sept. 11, we're going to have almost an identical location of where they are every single year. It will look almost identical of what you've seen every single year. It's going to be a magnificent tribute to those who died.”

It's unclear if the Tunnel to Tower light memorial will still go on as planned.