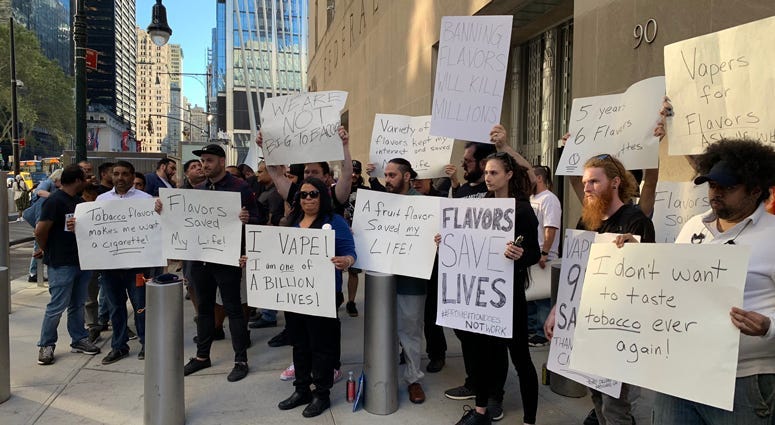 NEW YORK (WCBS 880) — A state health panel on Tuesday approved an emergency ban on the sale of all flavored e-cigarettes in New York.

The vote by the Public Health and Health Planning Council will make the ban effective immediately. It’s the first-ever ban of the flavored products in the United States.

The ban, which does not cover tobacco or menthol-flavored vape products, was proposed by Gov. Andrew Cuomo on Sunday, who citing the surging use among teenagers and even children.

“It is undeniable that vaping companies are deliberately using flavors like bubblegum, Captain Crunch and cotton candy to get young people hooked on e-cigarettes - it's a public health crisis and it ends today,” Gov. Cuomo said in a statement. “New York is not waiting for the federal government to act, and by banning flavored e-cigarettes we are safeguarding the public health and helping prevent countless young people from forming costly, unhealthy and potentially deadly life-long habits.”

Though the ban is effective immediately, retailers will have two weeks to remove merchandise from shelves.

Retailers who violate the ban will face fines of up to $2,000 per violation – which would be defined as each unit of flavored e-liquid or product containing e-liquid that is possessed, manufactured, sold or offered for sale.

Almost immediately after the ban was approved, the vaping industry announced it would take legal action to fight the action.

Opponents of the ban also gathered outside the meeting house to protest the rule, saying the flavors help millions of tobacco smokers quit cigarettes.

Here’s video of the motion’s final passage and the outrage that ensued: @wcbs880 pic.twitter.com/3QJDzhRfWp

“This is not about public health,” said activist Matthew Elliott. “Andrew Cuomo is backtracking this.”

Opponents contend the surge of vaping illnesses have been caused by black market products and banning almost everything will only further embolden that black market.

Federal health officials have linked vaping to six deaths and hundreds of confirmed cases of a mysterious lung illness, which resembles inhalation damage.

Michigan has also approved a statewide ban, but the rules have not been put in place yet.

New York's ban comes almost one week after President Donald Trump said his administration will propose a nationwide ban on thousands of flavors used in e-cigarettes.