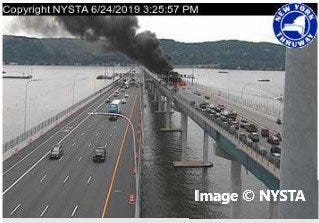 TARRYTOWN, N.Y. (WCBS 880) — A vehicle on the Gov. Mario M. Cuomo Bridge caught fire Monday afternoon, briefly shutting down all traffic to Rockland County at the start of the evening rush.

Listen Live For Updates | Sign Up For Breaking Newsletters

The vehicle, an RV, was about 100 yards onto the bridge and was towing a Honda Pilot. Both vehicles erupted into flames at around 3:30 p.m.

All Rockland-bound lanes were shut down as the Central Nyack and Tarrytown fire departments responded.

The New York State Thruway Authority says the fire was extinguished shortly after 4:30 p.m. and reopened all lanes on the bridge.

“No injuries have been reported. Immediately following the initial call, all northbound lanes were closed to allow emergency personnel to quickly respond to the scene,” the agency said in a statement. “A structural engineer has evaluated the overhead gantry structure, and all lanes have re-opened to allow traffic to flow. Motorists should expect residual delays.”

It remains unclear what caused the blaze. Photos from the area showed smoke billowing from the vehicles.

Travelers are advised to expect heavy delays in the area.