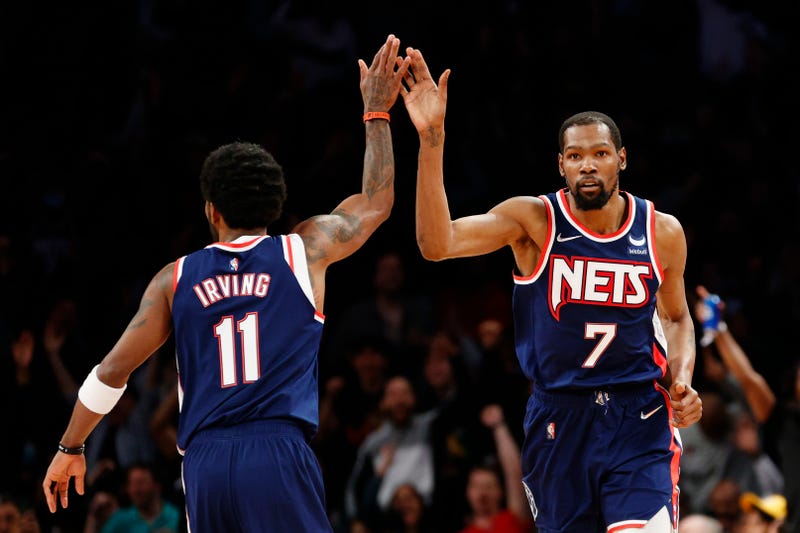 Kyrie Irving's long-term future with the Brooklyn Nets remains uncertain, but his tenure with the franchise will last at least one more season. According to NBA insider Shams Charania, the 30-year-old superstar will soon exercise his $36 million player option for the 2022-23 campaign and also bypass on sign-and-trade scenarios, to fulfill his commitment to star teammate Kevin Durant. Irving himself confirmed the decision via a statement to The Athletic.

Irving's future with Brooklyn was seemingly in doubt prior to Monday, as he'd reportedly received permission to seek sign-and-trade candidates while talks about an extension were at an "impasse." The change-of-heart call from Irving also came just hours after ESPN's Brian Windhorst reported that Brooklyn was prepared to see Irving and Durant depart this summer. Due to New York City's COVID-19 vaccine mandate, Irving played in only 29 games this past season.

"The Nets avoided the nuclear option. Now, they're still kicking the can down the road a year -- there's no guarantee Kyrie's going to be here for three years or four years," New York Post insider Brian Lewis explained to After Hours with Amy Lawrence on Tuesday. "But, it avoided the worst-case scenario -- it's him walking out of the door for nothing, signing with the Lakers for $6 million, and then Durant getting so irritated that he demands a trade right after Kyrie.

"Do I say Durant was ever likely to leave? No. But, that was the hammer Kyrie had over their heads. Because, they all know how close the two of them are, and everybody knows how supportive Durant's been of Irving. We should all have a friend who's as loyal as Durant is to Irving. That was the only leverage Kyrie had over the Nets. He played that leverage, and it didn't quite come to fruition for him... They can kick the can down the curb for another year."

The entire Nets conversation between Lewis and Lawrence can be accessed in the audio player above.