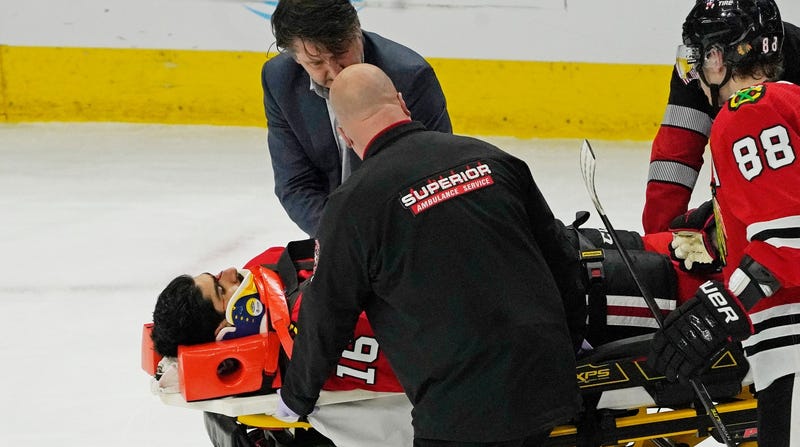 Blackhawks forward Jujhar Khaira is taken off on a stretcher after suffering a serious injury Tuesday. Photo credit USA Today Sports
By 670 Staff

(670 The Score) Blackhawks forward Jujhar Khaira was released from the hospital early Wednesday morning after suffering a significant injury on a brutal hit in his team’s loss to the Rangers on Tuesday evening at the United Center.

Khaira’s head bounced hard off the ice after he took a hit from the Rangers’ Jacob Trouba with just over six minutes gone by in the second period Tuesday. There was no sign of movement from Khaira after he first took the hit, the Associated Press reported. Khaira was then wheeled off on a stretcher and taken to Northwestern Memorial Hospital.

Really scary scene in Chicago as Jujhar Khaira is knocked out cold by Jacob Trouba. Paramedics on the ice. pic.twitter.com/so2YmuXl8Q

“Blackhawks forward Jujhar Khaira was released from Northwestern Hospital early this morning after extensive testing and returned home,” Terry said. “Despite the significant injury, his prognosis is excellent, and we expect a full recovery. At this point, it is too early to put a timeline on return to play.”

Khaira is in his first season in Chicago. He has two goals in 18 games.