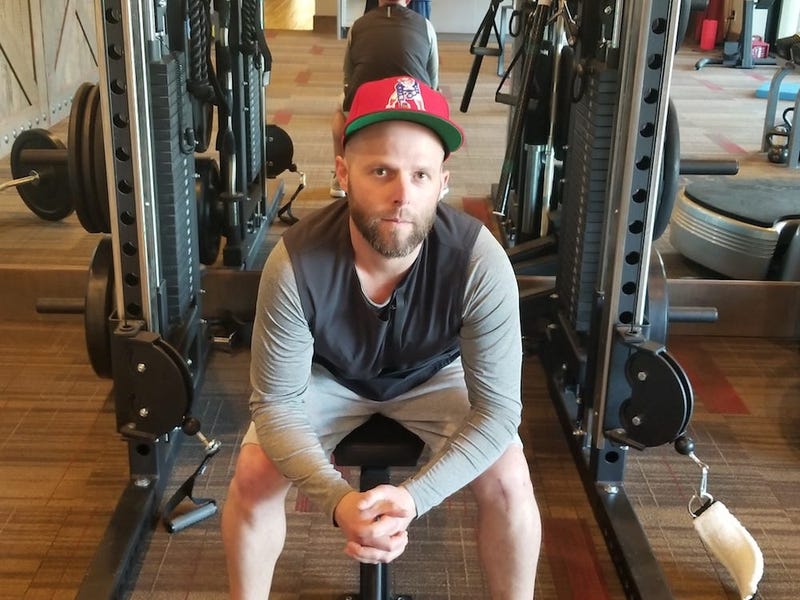 Now it houses the calm before the storm. This is where Pedroia is preparing to take on the crossroads of his career.

When the 34-year-old drew up the blueprints for his sprawling abode a few years ago the idea was simple. This was where he and his wife, Kelli, would raise their three boys while allowing the Red Sox second baseman the means to fine-tune the craft that had allowed for such a place. There was the weight room, possessing every single piece of equipment any baseball player would need. And, of course, he had that customized batting cage, with the "15" emblazoned on the entrance way in the back of home plate.

Everything about the construction of this made-to-order manse went as planned. The blueprint for what followed didn't. For that, he can thank those few seconds on April 21, 2017.

"Yeah," Pedroia said. "I think about it all the time."

What the second baseman continues to contemplate is that slide at Camden Yards. Manny Machado's aggressiveness into second base that night sent Pedroia down the road he is trying to get off of. It's a path that has led to an entire folder on Pedroia's cell phone with MRI photos of his left knee while eliciting more than a year of varying medical opinions, all the way up through a secret check-up in Colorado during the World Series. There was a season limited to three games. The new perspective on life. And, of course, one more chance to do what he loves doing more than most.

He has a bad knee. The kind of knee that might end some baseball players' careers. Pedroia is intent on not letting that knee get the last word.

"Put it this way, I just look at my whole career and nobody expected me to do what I did and I’ve enjoyed proving everyone wrong," he told WEEI.com, filling his workout room with intensity. "I think I have to do it one more time. That’s it. And that’s going to be fun. I enjoy that. And I hope it turns out the way it did the first time."

Has Pedroia talked to Machado since that slide into the second baseman's knee? "No." The brevity in the answer tells you he may not be happy about what transpired, but there are bigger fish to fry. There's a knee to repair, a career to continue and a narrative change. Those -- along with keeping tabs on the three little Pedroias -- are the priorities that exist in this space these days.

"Yeah, I am," said Pedroia when asked if this was the most motivated he has ever been. "I think … I am."
WEEI.com photo

"We still aren’t sure about Pedey’s scenario. that hasn’t changed since we talked before. We’ll know more about that in January."

This is what Dave Dombrowski's update on his second base position when talking to the media at the MLB winter meetings Monday afternoon. This was not supposed to be the message 13 months after the original knee surgery. Sure, there was some medical personnel who warned him such an operation might take as much as a year, but then there was that one diagnosis that suggested seven months. So that's what he went with.

As Pedroia noted, "The things I was told didn’t play out the way they should have. But that’s anything in life. You learn from them and you move on."

The problem has been that he has had to move on too many times.

"It’s been a long road and I’ve dealt with a lot," he added. "I’ve always said that there will be good to come out of this. There has to be."

There has been enlightenment surfaced from his ordeal. Start with Pedroia's revamped view when it comes to his lot in life. That was something that took root in his initial wave of rehabilitation.

"I know you only have a certain amount of time to play. All the outside stuff should not take away from the enjoyment of you trying to do your job or trying to help anybody," he said. "It shouldn’t. It took me 13 years to realize that but now I do. I care about my guys. I don’t give a (expletive) about anybody else. That’s it. That is it. Nothing else will matter."

He continued, "I think what I have to do today to get better at my job and try and to attack. That’s it. I don’t care what anybody says. It doesn’t matter what you say. I don’t care. I’ve been around long enough to know none of that matters, man. It doesn’t matter. Nothing. It matters how you prepare, what your role is with the team, how you go about it, what kind of attitude you bring and how you do everything you can to be great in the environment you’re in. Everything else I don’t care. I really don’t. I’m over it."

And the gratification of mentoring those Red Sox riding through the postseason was something unique to Pedroia's world.

Introduced to the quotes from Gordon Hayward suggesting there is an element of rooting against one's team when one is hurt, the second baseman's reaction was telling. "What?!" This was clearly not apples to apples.

"When I kind of knew I wasn’t going to be able to play I thought it would be the perfect opportunity that I could lead more because I didn’t have to worry about me as much … at all," he explained. "I could help Raf (Devers) at third a little bit. I could talk to Bogey (Xander Bogaerts) more. I could talk to Mookie (Betts) more. I could talk to the pitchers more. I talked to Eddie Rodriguez a lot, just how to attack certain hitters. I talked to (Christian) Vazquez a lot. Mitch (Moreland) a lot. It was perfect for me if I couldn’t play and help us that way I know how important bench guys or veteran guys are. They can say one thing that can turn everything around for one guy because that has happened with me. Our manager did that for me. So I thought it was a perfect time for me to do that.

"Being on the Red Sox and the way we play, the way we approach the game, that’s important to me because when I came up it was important to the veteran guys on those teams to make sure I played the game a certain way. It’s my job now to pass that on. I thought since I wasn’t playing I could concentrate fully on doing anything I can to help guys in any way possible to make them better. That was it."

But while the championship run was being punctuated, the quest to define his future kept going.

There were check-ups and check-ins, including a quick visit to doctors in Colorado while his team continued its series in Los Angeles. Things hadn't gone as planned over the course of the previous 365 days. So be it. Now Pedroia's focus was forced to turn toward living life as the Red Sox' second baseman for the 2019 season.
WEEI.com photo

Pedroia has a plan. That isn't difficult to decipher.

There are the molded cleats and knee brace which will all be new elements of his everyday uniform. Don't expect that little jump before every pitch. There won't be any wasted workouts, saving as many bullets as possible for gameday. And those muscles around the knee are going to be prioritized like never before. He is working out three days a week,  with an eye on the all-important running program starting in January.

There are no guarantees. But even with all the uncertainties, Pedroia has gotten the ultimate tip of the chapeau from the Red Sox. He has gotten the benefit of the doubt.

Dombrowski continues to reiterate that there are no plans to go out and get a major league option as a second base backup plan. There is Brock Holt, Tzu-Wei Lin and Eduardo Nunez. But right now the Red Sox are digging in on Plan A -- Dustin Pedroia.

"This is the way I look at my whole situation," he said. "In 2013 after Opening Day I tore my UCL in my left thumb completely off the bone and was told after Opening Day that I need surgery and was going to miss 8-12 weeks. And I played 178 games and I think I finished seventh in the MVP voting and we won the World Series. If you ask any medical expert, can a human being play … So basically every time I caught a ball my thumb bent back here. Every single medical person would say that cannot happen. But it did, and the team saw me do that. So if anybody can do this, I can. That’s the way I’m sure our team is looking at it and that’s the way I’m looking at it too.

"I honestly feel confident. I’m at the early stages of my rehab, at the foundation stage. I took some time off to just rest and heal and that was really beneficial. Now it’s getting that stability phase done, work toward more strength and then I’ll start incorporating some more agility and running and some power phase and a speed phase. Then head off to camp and hopefully, I’m over my past issues with my knee and I can resume playing every day."