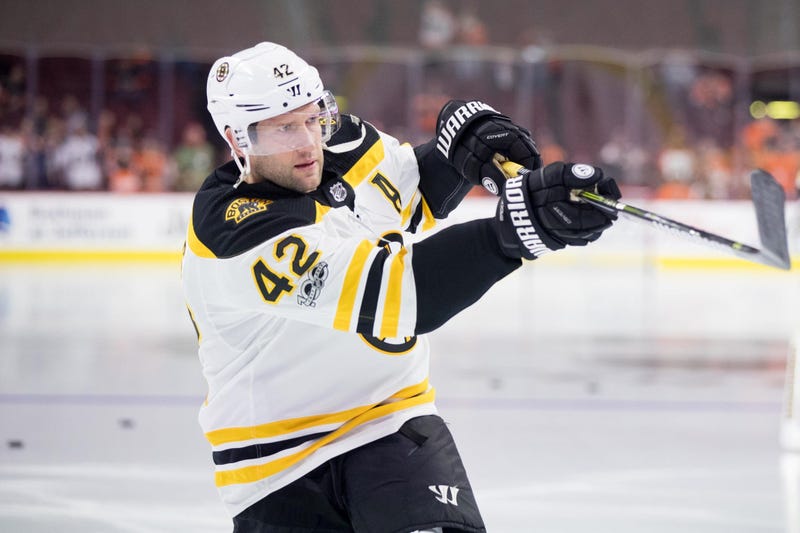 (Updated 5:40 p.m. after the Bruins assigned Ryan Donato to Providence of the AHL.)

David Backes practiced with the Bruins again on Thursday and his return to the lineup appears imminent.

“I’m ready to play ice hockey in a game. I think that’s the goal and that’s where I’m at,” Backes said at Warrior Ice Arena after his second full practice with the Bruins during his attempt to return from a concussion.

But Bruins coach Bruce Cassidy and all the club’s decision makers should think twice before forcing the lumbering forward back into a lineup that may not be getting the production it wants from anyone that's not on the first line, but is playing with the type of quickened pace and emerging chemistry that Backes could spoil. And, oh by the way, the Bruins have gone 3-1-1 without him.

Aside from his intangibles and leadership, the 34-year-old has brought little to the Bruins in terms of on-ice production ever since he signed up for five years at $6 million per season in 2016. Injuries and illness limited him to 131 games his first two seasons with Boston and have now cost him five more games this season.

Although his 33 points (14 goals, 19 assists) in 57 games were a respectable total for a third-line player last season, one season later (and older) he started this season pointless in seven games. Beyond the line of Brad Marchand, Patrice Bergeron and David Pastrnak, Bruins forwards have all struggled to put points on the score sheet, but it was the way that Backes wasn’t producing that was most disturbing even before he took a hit to the head from Edmonton’s Matt Benning on Oct. 18 and left the lineup starting with the next game at Vancouver.

As speed has taken over the game and defensive play has become more sophisticated, more scoring is being done off the rush. Backes just doesn’t have the wheels to keep up. Although he spoke about the chance he could be playing right wing next to Joakim Nordstrom, who could “put some pucks” in his corner, Nordstrom has benefitted from having speedster Anders Bjork and offensively gifted Ryan Donato, who was assigned to Providence of the AHL late Thursday afternoon, on his wings. Sometimes Chris Wagner has flanked Nordstrom, and although he comes from the same straight-line hockey school as Backes, Wagner’s better able to react with the puck once he’s turned it over on the forecheck and can do more in the offensive zone than just park in front of the net.

Cassidy on Thursday lauded Backes’ improved penalty killing in tandem with Sean Kuraly, but the Bruins have plenty other penalty killers and they’ve gone 13-for-16 on the penalty kill in Backes absence. Of course, Cassidy also talked about Backes’ mentorship and presence being a boost for the Bruins.

“I think he’s good with the younger guys. When he’s playing with them he’ll pull them aside and walk through situational details,” Cassidy said. “I think he’s pretty vocal on the bench, which helps some nights. We’re generally a quite team.”

It’s Cassidy’s job to talk up his alternate captain, a player whose heart and perseverance have never been in question and who certainly has a role with the Bruins going forward. He just shouldn’t have a full-time role just because he’s a shoulder to lean on for younger guys or dishes out some sweet chirps in between shifts.

For all of the Bruins’ faults (a dearth of secondary scoring, Tuukka Rask’s slow start in net main among them), they’re 7-3-2 and trending in a positive direction. Although it took Cassidy breaking up his first line in Carolina to spark the offense, the top six of Marchand-Bergeron-Pastrnak on the first line and Danton Heinen, David Krejci and Jake DeBrusk on the second line was starting to work out for a couple games before the win over the Hurricanes. Most of the bottom six forwards have been blending well, regardless of how Cassidy has combined them, with little to show for it in terms of points. However there have been plenty of momentum-changing shifts at key points in the game to keep those bottom-six forwards in the lineup.

It’s hard to argue for Backes to replace anyone. Nordstrom has been important not just in his primary role but also as someone that can play up and down the lineup during a game as needed. Wagner, Acciari and Kuraly have blended well enough to deserve to be an every-night fourth line. Donato’s had his ups and downs but has looked more engaged the past couple games and is finding ways to get his shot on net with Nordstrom giving him the puck in the right areas of the ice. Bjork has had some solid moments on the third line and will probably be better served when Cassidy gives him a chance to use his speed in a top-six role down the road.

Before Backes’ injury he was the only one of the bottom-six forwards not be rotated out of the lineup as a healthy scratch. No one’s sentencing him to an extended stay in the press box, he just shouldn’t be guaranteed a spot in the lineup just because of his salary or his stature as a person. With Donato gone, the Bruins are left with 12 forwards, so Backes is going to play starting with Saturday's game in Nashville. But just because Backes is getting right back into the lineup doesn't mean he shouldn't have to sit if he doesn't begin to give the Bruins more than he did in the recent past.