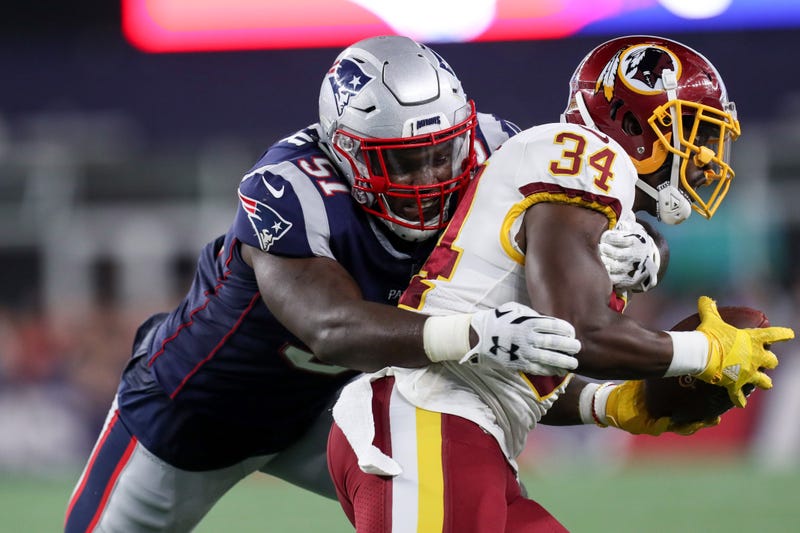 FOXBORO — Going into the draft, it seemed the biggest need on the Patriots roster was linebacker.

On the depth chart there’s just Dont’a Hightower, Kyle Van Noy, Elandon Roberts, Marquis Flowers, Harvey Langi and Nicholas Grigsby. Many expected the team would use one of its top picks on a linebacker, but that wasn’t the case.

Given the current state of the roster at the position, there could be some extra pressure on them to perform, but also an opportunity to contribute right away. Although, they aren’t thinking about that right now, as they are just trying to get caught up to speed with what it’s like to play in the NFL.

The Patriots held their rookie minicamp over the weekend.

“Us rookies, we’ve just been getting in and trying to catch up to all the vets,” Sam said Tuesday at Gillette Stadium. “Learn as much as you can and be a sponge, just get as much information as you can. Work hard and try and find our place in the building.”

“We have a lot of new players just trying to get the playbook down. That is all I am focusing on now,” Daniels added.

It’s clear the biggest weakness for the position last season was the lack of athleticism and inability to cover running backs out of the backfield. Sam could potentially be that guy, as he recently said linebackers in the NFL need to be like big defensive backs given how athletic the NFL skill positions have become.

At Arizona State, Sam dropped into coverage a bunch.

“I feel like the game has changed over the past few years,” Sam said to Draft Wire last month. “Linebackers better be able to run sideline-to-sideline nowadays. You better be active in coverage, as well. You have to be smart. Nowadays with how offenses are set up, linebackers are almost like a bigger defensive back. You have to be able to run and cover. If you can do those things, you’re giving your defense an advantage. It doesn’t allow the offense to find too many mismatches. I feel like those are the three most important traits — run, cover and play smart.”

Bentley, who was the first three-year captain in Purdue history, seems like a player who has the chance to make the most impact in stopping the run. He’s know for being a "thumper," but came off the field on many third downs with the Boilermakers.

He and Roberts seem like very similar players and potentially could be fighting for a roster spot with each other.

“[Hitting] is one aspect of the game, so I definitely take pride in it,” Bentley said. “Along with that, I definitely want to get this playbook down.”

Given the state of the linebackers depth chart, the opportunity is there for both players to make impacts with the team this coming season, maybe more so than most other Day 3 selections across the league. It’s hard to put pressure on players selected so low in the draft, but given the other linebackers on the Patriots roster and what transpired on the field last season, it would be a huge boost to the defense if one of, or both of these players can make an impact.

With that being said, both players have only spent a few short days in the building working with the coaching staff. There’s a long way to go before any of them become NFL contributors, but the opportunity certainly is there.