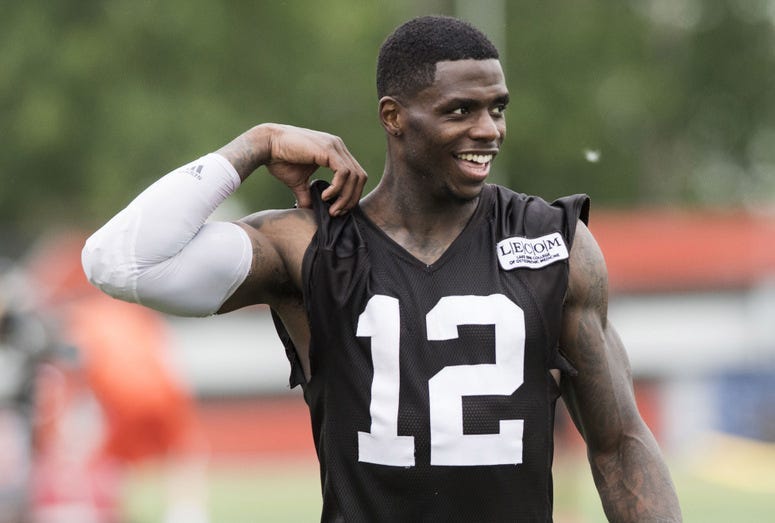 There are two schools of thought on Josh Gordon:

1. His lack of professionalism is appalling. Acquiring him sends a terrible message to the rest of your team about accountability. He doesn't deserve any more chances. Let him be someone else's problem.

Put me in Camp No. 2, without regret.

The Patriots rewarded the oddsmakers on Monday by swinging a deal for the talented but troubled Browns wideout. To label Gordon mercurial is an insult to the planet, god, and element. He has missed 55 of his last 66 games for various disciplinary reasons, including a year-long suspension in 2015 after violating the league's substance-abuse policy for the bajillionth time and then a relapse that cost him 2016.

He has struggled with alcohol and drugs, and the Browns on Saturday took the unusual step of announcing their intentions to cut him by 4 p.m. on Monday after he showed up with a hamstring strain reportedly suffered during a promotional shoot.

He's the hottest of messes, but he's also absurdly talented. As a 22-year-old in 2013, he led the NFL in receiving with over 1,600 yards in just 14 games (he had naturally been suspended for the first 2 games). He did this while catching passes from the likes of Jason Campbell, Brandon Weeden, and current Pats backup Brian Hoyer, who combined for a quarterback rating of 75.7 for that 4-12 team. Without Gordon, that number might effectively have fallen to zero.

Unfortunately, he hasn't done much since. He returned last year to average over 18 yards a catch in five games. Last week, he caught the game-tying touchdown in a Week 1 draw against the Steelers with under two minutes in regulation.

Then came his latest last straw -- and we know how much Tom Brady hates straws -- which triggered the series of events that led him to New England.

The question you must ask yourself as a fan is how much trouble you're willing to overlook to acquire talent. The Patriots drafted quite literally the worst human being ever to play the game in convicted murderer Aaron Hernandez. If he represents one end of the spectrum and a decent human being like Matthew Slater or Troy Brown resides at the other, then where does Gordon land on the continuum?

Put another way: you lose the moral high ground as a fanbase when your H-back kills a guy.

Gordon's transgressions fall into roughly two categories: marijuana and alcohol. (Oh, and apparently photo shoots.) That doesn't make him any worse than Corey Dillon, whose rap sheet could wallpaper the Gillette Stadium lighthouse without encountering the same violation twice. Nor does it place him any lower on the productive citizen spectrum than Albert Haynesworth, who arrived in Foxboro despite being arrested, indicted, and/or accused of partially paralyzing a motorist after crashing his Ferrari at over 100 mph, impregnating a prostitute, failing to re-pay a loan, and punching a motorist. The reckless boating charge came later.

More recently, the Patriots took a chance on receiver Michael Floyd, who had just passed out behind the wheel in Arizona, and Kenny Britt, who was arrested for allegedly engaging in a car chase with police. Before that, the Pats drafted Willie Andrews despite gun charges and Brandon Meriweather after he had exchanged actual gunshots during an altercation.

Once we dispense with the myth that the Patriots only employ missionaries and florists, it becomes easier to accept someone like Gordon, who has battled addiction issues and immaturity as much as anything else.

If he doesn't work out, the Patriots can cut him faster than a sprig of rosemary. If he does work out, well then, now you're talking. His game-breaking speed and hands make him the perfect complement for an offense that is increasingly asking Brady to do everything. With no receivers to speak of until Julian Edelman returns, the Patriots have been forced to live with dump-offs, screens, and a mish-mash of crap to move the ball. The Jags proved on Sunday it's not sustainable against a defense that can effectively neutralize Rob Gronkowski, especially when there's no reason to respect anyone more than 10 yards downfield with Brandin Cooks averaging 150 yards a week in Los Angeles.

With Brady's time as an NFL QB dwindling, saddling him with such a woebegone weapons does the franchise no favors. That's why when someone as electric as Gordon becomes available for nothing, you take the chance.

So he's a (bleep)-up. Big deal. This is the NFL, and the Patriots desperately need help. If he screws up, Brady can resume throwing to James Develin.

But in the meantime, yes, please.