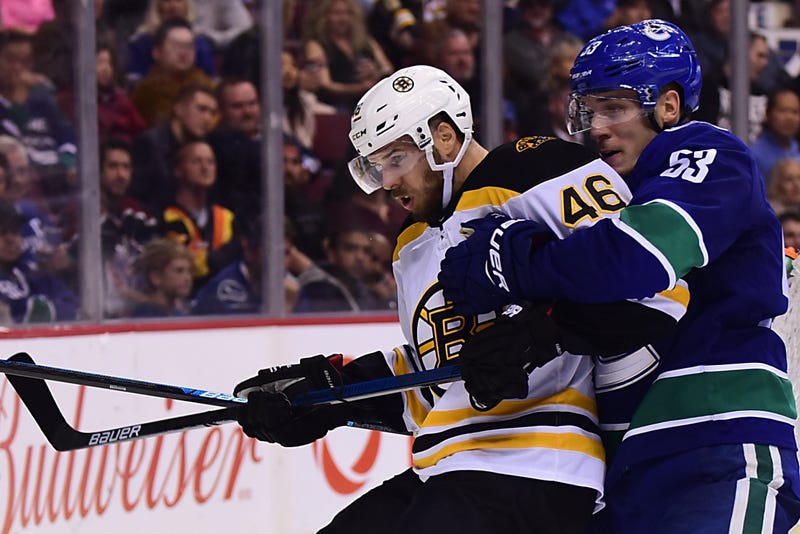 It’s time for David Krejci to carry the Bruins.

Well, he doesn’t have to carry them as much as he just has to replace Patrice Bergeron – which is kind of like carrying them.

Anyway, if the 32-year-old Krejci’s not up to the task, it will be an indictment on his abilities and the Bruins’ depth, which they think is championship-caliber.

The news that Bergeron will miss at least four weeks because of a rib and sternoclavicular injury, obviously, couldn’t have come at a worse time because Zdeno Chara and five other defensemen are currently out of the lineup because of injuries (Kevan Miller should reduce that list by one by returning to the lineup in Detroit on Wednesday).

Assuming the Bruins continue to get healthier on their back end and don’t lose any major parts up front, they should be able to at least duplicate the 11-5-2 record they produced without Bergeron last season.

The Bruins roster had a little different look in 2017-18 and Riley Nash, in his contract year, filled in admirably for Bergeron, centering Brad Marchand and David Pastrnak for 165 5-on-5 minutes. In that time, according to Corsica.hockey, the Bruins scored 12 goals and allowed four. The Marchand-Nash-Pastrnak line had a Corsi For percentage of 55.3, not too far off what the Marchand-Bergeron-Pastrnak line produced (58.9 CF%) for the season.

Nash now resides in Columbus, where he got a three-year contract worth $2.75 million per season, and no one is betting on Joakim Nordstrom, Jakob Forsbacka Karlsson or Colby Cave having a Nash-like breakthrough centering the Bruins’ top line. Although each member of that trio might get a chance to play in between Marchand and Pastrnak at some point, it seemed like coach Bruce Cassidy was more likely going to break up Boston’s best two wings, at least to start the Bruins’ Bergeron-less existence.

At practice Tuesday, Krejci had Pastrnak and speedster Anders Bjork on his wings, while Marchand and Jake DeBrusk flanked Nordstrom. In the third period of the Bruins’ 2-1 win at Arizona on Saturday, Nordstorm centered Marchand and Pastrnak. Cassidy always has the same decision to make, whether Bergeron’s in the lineup or not, about loading up one line or going for balance in his top two lines.

Whichever way Cassidy goes, there’s only one way anything works: David Krejci has to play like a No. 1 center. Over the years Krejci has had reasonable excuses – injuries, lack of talent on his wings, prime ice time allocated to Bergeron’s line – but now if he can’t be the Bruins’ alpha dog up front there will be no one to blame but himself.

Krejci is the Bruins’ highest-paid forward. While no one can ever hold that against him, because at the time he signed his $7.25 million extension he was the Bruins’ No. 1 center, he may not have it in him to be the No. 1 now. He has 16 points (two goals, 14 assists) in 20 games this season, with just one goal and five assists coming at 5-on-5 despite being the Bruins’ most-protected center in terms of offensive zone starts (60.13 percent of his starts have come in the offensive zone). His 53.35 CF%, however, suggest he’s been keeping the Bruins on the attack for his production to tick upward.

Everything, except maybe the banged-up defense corps, is being lined up to make Krejci successful in this upcoming stretch. Undoubtedly, Cassidy isn’t going to be patient with his line combinations. There will be Krejci shifts between Marchand and Pastrnak, and shifts between Bjork and DeBrusk. Ideally Krejci and Pastrnak would finally put the chemistry they showed in the 2018 IIHF World Championship last spring for Team Czech Republic but have never found in the NHL. And then maybe Nordstrom or Forsbacka Karlsson (who’s really supposed to be the heir apparent here to Bergeron or Krejci) can do enough to make sure the Bruins don’t become a one-line team again.

But they’ve gotten by with one line in the past and they could do so again, at least for several weeks. And whether anything positive happens for the Bruins will come down to how Krejci fares.

Krejci’s time in Bergeron’s shadow has been suspended indefinitely and the lights are firmly on him. It’s his opportunity to prove he can drive a top line again for the Bruins, or they’re going to suffer.