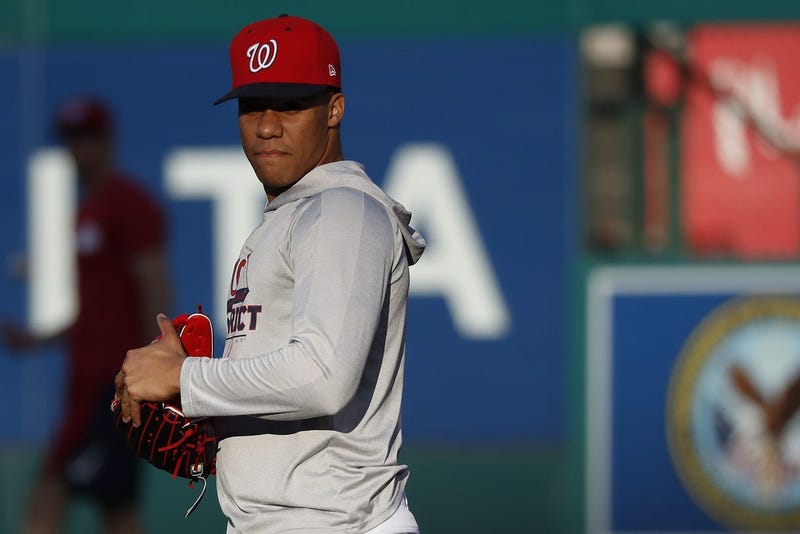 Ten years ago it was a decision that some might have rolled their eyes at.

When the 2009 season came to a close Johnny DiPuglia was entrenched as a valued member of a Red Sox international scouting department that helped secure a pair of World Series championships, having been in the organization for 10 years. Sure, the position with the Washington Nationals might have seemed like a promotion -- getting the chance to run all of Mike Rizzo's international operations -- but considering the hole the Nationals found themselves in thanks to the Smiley Gonzalez chaos -- (read more about that by clicking here) -- this was far from a no-brainer.

"It was different with the Red Sox," DiPuglia said in a phone interview. "The Red Sox already had a stable base. An academy. They had some core players there. When (former international scouting director Craig Shipley) Ship and I were together I think we had 19 guys get to the big leagues. It was more fun than when I started here with the Nationals. We had to regain the trust of ownership because of what had happened with the Smiley Gonzalez scandal. It was more of a struggle. But while it was more of a struggle it was more rewarding because we were rock bottom. Out of 30 clubs in Latin America, we were probably 30 spending-wise. We had to gain their trust."

A resume that included signing the likes of Anibal Sanchez and Hanley Ramirez was all well and good. But when DiPuglia showed up with the Nationals the kind of success he had left behind in Boston seemed so far from a reality in Washington.

"This has to be the pinnacle of my 29 years as a scout, watching the fruits of our labor produce in the World Series," he said.

This is a story that is more than just a familiar name on a successful team's masthead. The fruit of DiPuglia's labor will be revealed in some of the most powerful images found in the upcoming World Series. Juan Soto. Victor Robles. Ever heard of them?

The Nationals -- the team buried in such a deep hole when it came to the international baseball-playing landscape -- is rolling out two of the most dynamic young players in the big leagues on baseball's late-October stage.

"Our (Dominican) academy is probably not a JW Marriott but it’s a Fairfield Inn," DiPuglia joked when talking about the state of the Nationals' international scouting department. "It’s been very gratifying, especially seeing those two young kids playing for us in the everyday lineup. And we have more coming.

Soto is a different type of player than Devers, and he is remarkably two years younger -- having made his big league debut as a 19-year-old in 2018. But DiPuglia -- who scouted both extensively -- has always seen a very real similarity between the two.

"Hitting-wise, kind of similar to what Devers was," said DiPuglia when remembering the impression left by Soto on the way to the outfielder's commitment to Washington in 2015. "Devers’ bat was special. When he was a kid he always had the ability to barrel the ball. With Soto, he was just such a professional. He understood the strike zone. He took breaking balls like he was a veteran. But Devers did that too. Devers just did that with a little bit more of a flair than Soto did. But they are similar-type of players. … They both had that knack of being able to barrel a baseball, which is hard to find."

Another interesting Red Sox-related link to one of these young Nationals stars was the nickname Robles gave himself growing up: "David Ortiz pequeño" or "Little David Ortiz."

"I don’t know how he figured that out because he had nothing of David Ortiz," the Nationals' chief international scout said of Robles. "He was right-handed. He could run. He is a center fielder. A quick-twitch guy. Could really throw. Maybe the only thing that he had was that he is a high-energy guy and loved to play. All those kids down there idolize David."

This October has obviously been a whole lot different.

The front office had to squeeze a lot in a little amount of time heading into last November, so in that respect, the Red Sox has been afforded a luxury. But each member of the group of four picking up the slack since Dave Dombrowski's dismissal -- Eddie Romero, Zack Scott, Brian O'Halloran and Raquel Ferreira -- have been tasked with added responsibility. Then there are the interviews for a trio of coaching vacancies (pitching coach/assistant pitching coach/assistant hitting coach) that weren't an issue last year. In other words, this has been a convoluted October in its own way.

Now, how the extra month can help ...

As one big-league executive explained it, "Focus ... It's the only advantage."

The point is that while you can prepare for the next season while going through a postseason run, it's inevitable that attentions are going to be split. Thinking about how rosters and approaches might be altered becomes a much clearer proposition without the distraction of trying to win playoff baseball games.

"Obviously, we don’t want too much time in the offseason. I don’t want to go home on Oct. 2. But in this situation, we’re going home on Oct. 2 and we have time to prepare," Red Sox manager Alex Cora said on the Bradfo Sho podcast during the last week of the regular season. "You reset everything you have to do. You catch up with the family and do everything you have to do and on Nov. 1 everyone starts working." (This is Cora's first free October since 2015, having spent the month three years ago in Bristol, Conn. for ESPN before going through World Series runs the following two seasons.)

The extra focus allowed by the fewer games isn't only limited to the coaches or front offices. The players also avoid the shortened offseason that makes preparation for the next season feel like a whirlwind.

"You don’t necessarily carry it around with you wisen you're walking every day but when you get out there and get in the games there’s a little bit there," pitcher Rick Porcello said on his latest Bradfo Sho appearance when discussing the impact of those extra innings in 2018. "But plenty of guys have been able to bounce back from World Series and still be very effective from the first pitch of the season to all the way through. You look at the guys from he Astros, the guys from the Dodgers those guys have been pitching deep in the playoffs for a few years now and they keep rolling. It’s not excuse. ... It’s another adjustment you have to learn to deal with. You pitch that deep in the year you have to figure out how to get yourself ready to go from the Day 1 on."

Look, Son, everything the light touches is Vermont. We don’t rule over or own any of it. But it is nice to look at, especially during peak foliage.

SO, CAN THE ASTROS KEEP THIS UP?

You now have a second World Series in the last three years, with an ALCS thrown in the middle of it. You talk about losing Octobers ...

But just how long is this run by Houston sustainable?

They talk about the analytics, and some key extensions (Jose Altuve, Alex Bregman), but this whole equation will come back to the top of their rotation. (Just ask the Red Sox.) Justin Verlander is signed through 2021, as is Zack Greinke. That's a start considering the perceived state both 30-something starters are still in. But the Astros' best pitcher Gerrit Cole is in line to hit free agency this offseason and that figures to be a decision that will tell us a lot about how Houston plans on building this thing.

Cole will be 30 years old next September. When it comes to total pitches thrown over the past three seasons he only trails Verlander.

But in terms of making a case that he is worthy of the kind of long-term deal given out to some other top tier starters over the last few years, Cole is in a pretty good spot. His total number of pitches (19,781) is below where Jon Lester was  (27,638) at when committing to six years with the Cubs, and also shy of Max Scherzer's 21,991 pitches at the time he became a free agent. David Price? His pitch count total when inking that seven-year contract with the Red Sox was 23,687.

Washington's commitment to both Stephen Strasburg (7 years) and Patrick Corbin (6 years) came with each pitcher having thrown just shy of 15,000 pitches at the time of their agreements.

The moral of the story is that even with the wary eyes cast toward free agent pitchers heading into their 30's, Cole will be paid the kind of money that is pushing a team's chips to the middle of the table. And it is this type of player who can go a long way toward defining a team's shelf-life. Just ask the Red Sox.

- Despite playing in just one round during the 2017 playoffs and not participating in the postseason this time around, as we sit here the Red Sox pitchers have still thrown more pitches than any other team over the past three seasons.

- At most, we are 15 days away from the day J.D. Martinez will have to define his intentions regarding that opt-out. The Red Sox still don't have a general manager. To think that someone outside the organization is going to be dropped in the middle of these flurry of decisions which need to be made while having to be defined by them in the years to come just seems like a stretch. (The GM meetings start Nov. 11.)

- You know whose collective bargaining agreement is up? The umpires. One thing to look for will be a much greater significant turnover (which usually encompasses just a couple umps each year) this time around. This marks the 20th anniversary of the last huge wave of umpiring additions, and umpires' pensions kick in after 20 years. Stay tuned.