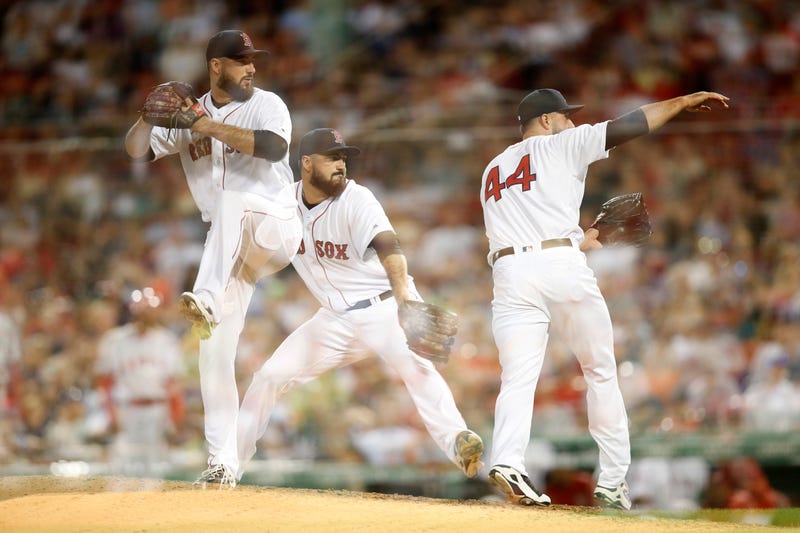 “Who said this, first off?” he asks conspiratorially, admitting nothing.

Workman, who projects a stoic, taciturn, seen-not-heard persona with the media, sits back and laughs.

“I definitely have a little different demeanor talking with y’all than with my teammates,” he admits.

The secret? Brandon Workman is not actually the strong, silent type. He’s the strong, manic type, and he’s the loudest, (bleep)-talkingest member of a Red Sox bullpen that includes Kelly, who’s not exactly a wallflower.

“I’m surprised that no one’s figured this out already,” Kelly says. “If there’s a microphone, you guys would be shocked. It’s like seeing your high school librarian in a death metal band.”

Workman trash talks everyone, but it’s a closed ecosystem. “He talks so much (expletive),” Hembree says, “but it’s to us, not even to the other team.”

You can’t understand quite how shocking this is unless you’ve tried prying a quote or two from the 6-foot-5, 235-pound Texan, who looks like someone not to be messed with, thanks to a lengthy scar on his left cheek. Reticent doesn’t begin to describe Workman, who’s pleasant, but not exactly lively in an interview setting.

His teammates see a vastly different side.

“Workman’s the guy that likes to stir the pot,” Hembree says. “He likes to hurt people’s feelings. If he sees that he’s rubbing you the wrong way, he's going to keep going at it. He enjoys that for some reason. Everybody’s used to it. He particularly likes to get on Barnes a lot. I guess he sees a weakness in Barnes mentally, so he just tries to crush him every day.”

The Barnes-Workman dynamic dates back a decade to college when they pitched on the Cape together. They developed a big brother/little brother – or maybe twin brother – dynamic that endures to this day.

“He’ll come at me for anything he can,” Barnes says. “It doesn’t matter. You pick something and he’ll do it. Like he was getting on me (Sunday) for having the workout at 11 o’clock in the morning, as if I was the one who set that time.”

“Yeah, I definitely put that on him, because he’s our player rep,” he says. “That’s definitely his fault.”

Workman relentlessly attacks Barnes over his fielding. “That’s a pretty easy target,” he says. “I just mess with him. If I can get under his skin about something, I’ll kind of get in there and dig around and see what I can find to get him fired up on any given day.”

Barnes usually has a readymade comeback – except for those times that he enrages Workman by ignoring him – but in matters of glovework, he knows he’s playing a losing hand.

“I don’t have a comeback for that,” Barnes admits. “I haven’t made a strong case for myself. It’s not pretty, but the play gets made more times than not, even though I might look like a baby deer doing it.”

Barnes and Workman will bicker over anything, especially as it relates to their respective home states. Workman recently argued that Texas could survive on its own better than Barnes’ native Connecticut.

“We give him a hard time, because everything has to be Texas,” Hembree said. “You know how everybody from Texas says everything’s bigger in Texas? He takes it to heart. You see Workman, that’s a big guy. He loves Texas. He loves Texas football. He loves Cowboys football.”

He also loves Barnes, which makes the whole situation workable.

“Me and Barnes give it to each other pretty good back and forth on a daily basis and we’ve done that for coming up on 10 years now with each other,” Workman notes. “It’s always good-natured. We wear each other out pretty good. Anytime anyone says anything stupid or does something dumb, it’s pointed out to everyone else, usually pretty loudly.

“That’s just kind of the way I am. Y’all probably wouldn’t believe it, but I have a louder personality. I tend to bring it out during baseball games or around the locker room, pretty much innings one through nine, every single day.”

But there’s a legitimate respect for Workman, too. Five years ago, blessed with a mid-90s fastball, he threw pivotal relief innings in the World Series and even drew an at-bat. He earned his championship ring by posting a 0.00 ERA in seven postseason outings.

The ensuing years tested him, however. He went 1-10 as a starter in 2014 before undergoing Tommy John surgery that cost him the 2015 and 2016 seasons. He has very quietly posted a 3.22 ERA over the last two years in, dare we say it, Workmanlike fashion, and he recorded one of the key outs of the ALDS vs. the Yankees when he buried Gleyber Torres with a devastating curveball in Game 1.

Workman threw 97 as a rookie, but he’s lucky to hit 94 now. He instead relies on a big curveball, and the guts to attack hitters with whatever he’s got.

“His attitude, what he’s been through, obviously he’s pitching and getting outs, but he’s not working with the same stuff he had in the past, the last time we were here. And he knows that,” Kimbrel says. “But he’s also going out there competing just like he still has the stuff he did. That’s why he’s successful, the aggressiveness that he has, I’m going to come after you, this is what I’ve got, and you still can’t hit it. I think that attitude definitely makes its way around the bullpen, and he’s just a fun guy.”

Don’t think for a second, however, that Workman keeps his World Series experience to himself. He’s the only member of the bullpen with a ring, and he’s not shy about saying it.

If he can weaponize information against his teammates, you can be damn sure he will.

“He’ll definitely remind you he’s the only one down there that’s been to a World Series,” Kimbrel says, “and that he’s ready to get his innings in again.”

Unfortunately, he won't get the chance. Workman was left off the World Series roster in favor of veteran Drew Pomeranz in a nod to the number of left-handed hitters dotting the Dodgers lineup. So while he won't pitch in this series, it's safe to say this isn't the last his teammates have heard from him.