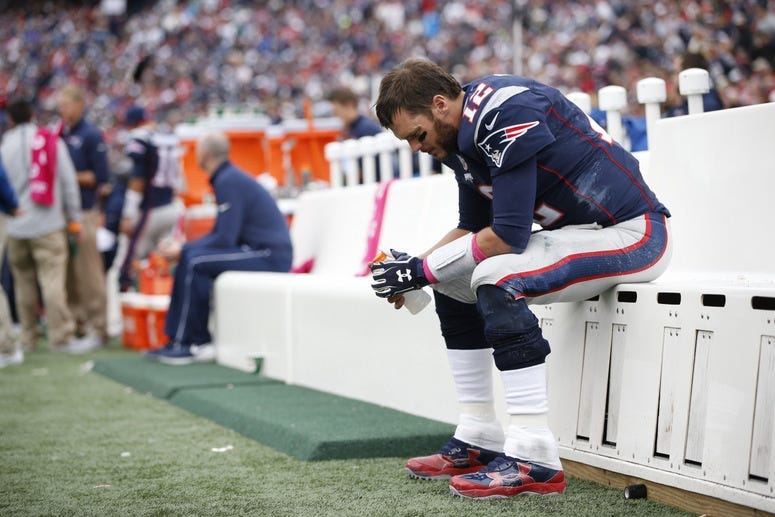 That sound you just heard wasn't an icicle crashing from the eaves. It was another Patriots player leaping off the lighthouse at Gillette Stadium and running for his life.

There are bad weeks and then there's what's transpiring in Foxboro. The Patriots have started the NFL offseason with a bang. Unfortunately it's the starter's pistol as their most proven free agents race for the exits. The ensuing whimper is the sound of their fans collectively realizing none of these guys is coming back.

But don't worry. The Patriots are signing special teamers as if the most critical phase of the game is punt coverage, which helps explain the rush to secure Nate Ebner, Brandon King, and presumably Matthew Slater.

The exodus on its own would be bad enough, especially when paired with injuries to Julian Edelman and Dont'a Hightower, but we haven't even gotten to Tom Brady and Rob Gronkowski yet. The former released the final installment of his Tom vs. Time docuseries on Monday and it was hard to miss his dissatisfaction in the final frames as he wondered aloud whether this was all worth it.

The latter still hasn't committed to playing in 2018, leaving us instead to mine his social media ramblings for clues. The latest -- an Instagram post congratulating Amendola on his contract with the Dolphins, and another tweet of hip-hop lyrics -- are being dissected like a Dead Sea Scroll. Never have the words of Juicy J carried such weight.

This feels really bad, and I know we've said that before only to be proven wrong the following February, but the Patriots are acting like a dynasty on the verge of collapse. Brady suddenly faces a future without his Hall of Fame tight end, his dependable left tackle, his clutch postseason receiver, and maybe even his favorite target, depending on Edelman's recovery from a torn ACL. Add to the mix a growing sense of disillusionment with the Patriot Way, and suddenly Tom might decide it's Time sooner than any of us imagined.

Think about the clusterbleep if the 2018 season is Brady's last. The Patriots traded Jimmy Garoppolo because they didn't believe they'd need another quarterback for three to five years. They also couldn't justify paying two quarterbacks $50 million, because they needed that money to re-sign Solder, Amendola, and maybe Lewis. Whoops.

Now we're left debating the merits of A.J. McCarron -- oh, wait, he signed with the Bills -- and facing a world without Brady and Bill Belichick in the time it will take Democrats to flip the House.

What the hell is happening? Not even five weeks ago, we considered a sixth Super Bowl automatic. Since that shocking loss to the Eagles, however, it's been one crisis after another. Belichick still hasn't explained Butler's benching. Defensive coordinator Matt Patricia left for the Lions and offensive coordinator Josh McDaniels nearly followed suit. Gronk might retire. Brady is contemplating his career mortality. Their best free agents bailed and there's a possibility they won't find their starting left tackle until the draft. The Pats tried to acquire Michael Bennett and failed. They tried to acquire Trent Murphy and he spurned them for the Bills. They never had a shot at Aqib Talib or Richard Sherman. But hey, at least they're in on the effervescent Ndamukong Suh.

We cling to the belief that they're the Patriots and all will be fine, but even their most ardent supporters are wavering (when you lose Jerry Thornton, it has not been a good day). There's still plenty of offseason remaining to right the ship, but it's taking on water.

As the fog thickens and the lighthouse dims, it's enough to make you wonder not how long they'll stay afloat, but if there'll be any lifeboats left when it's officially time to abandon ship.