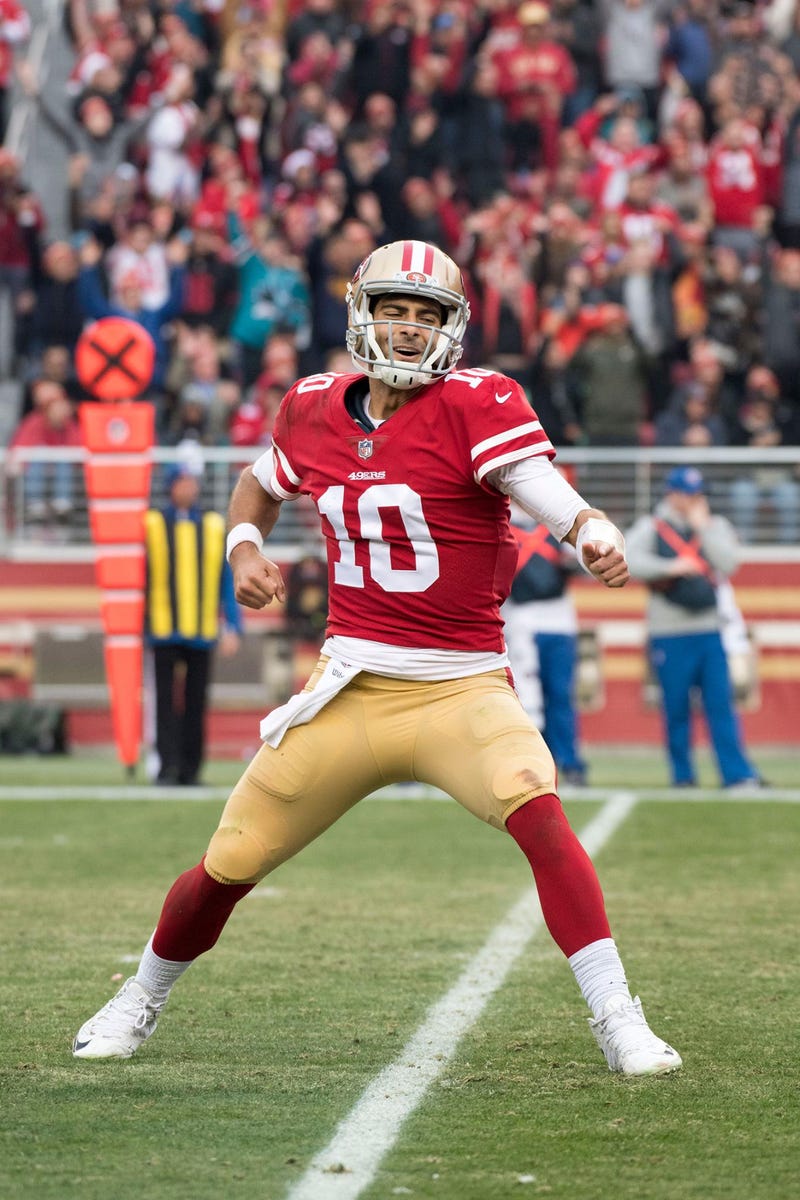 From snap to release, the throw against one of the league's most aggressive pass rushes required 1.92 seconds.

That was enough time for a three-step drop and scan of two tight ends running shallow routes to the right, one sitting on the hash, the other in the flat. Three defenders had them blanketed.

As the pocket began collapsing in his face, the QB whipped his gaze to the left, where an unheralded outside receiver ran a slant on a Pro Bowl corner. The pass hit him in stride for 12 yards and a first down.

That description probably fits 1,500 throws in the career of Patriots quarterback Tom Brady. But this one belonged to his former understudy, Jimmy Garoppolo.

It came on Christmas Eve against the Jacksonville Jaguars, who visit Foxboro this Sunday for the AFC title game. The Jags own a ferocious defense, but San Francisco julienned it during the season. Garoppolo led the Niners to touchdowns on their first and last drives and a bunch in between in a 44-33 victory that should give Bill Belichick and Co. plenty to work with this week.

The temptation from the outside might be to emulate the Steelers, who posted 42 points on five Ben Roethlisberger touchdowns in Sunday's shocking 45-42 defeat. But almost nothing the Steelers did applies to the Patriots. Pittsburgh relied on its otherworldly skill players -- primarily receiver Antonio Brown and running back Le'Veon Bell -- to turn suffocating coverage into tremendous TDs downfield. Each converted one-handed scores, with Brown snatching another away from the aforementioned Pro Bowler, A.J. Bouye, for good measure.

The Patriots won't beat the Jaguars vertically. They'll beat them the way Garoppolo and the 49ers did -- underneath and side-to-side, taking what the defense gives in eight-yard chunks.

Watching the Jags-Niners game from start to finish (thank you, NFL Game Pass), it's easy to think you're watching Brady instead of Jimmy G. It's hard to envision a better blueprint for attacking the Jags, who allowed Garoppolo to complete 21 of 30 passes for 242 yards, two touchdowns and one tipped interception that otherwise might've been a third TD. He also ran for a score on a Brady-esque quarterback sneak and converted 10-of-15 third downs.

"He was very good for their system. It's not like he just shredded us up in the secondary," corner Jalen Ramsey told the San Jose Mercury News. "They do a lot of boots, they do a lot of stuff like that. Guys were getting open in zones and he was making his throws. Getting the ball out of his hands quick. Kudos to him."

So much from this Week 16 game applies to the Patriots, who should be able to frustrate Jacksonville's defense in the same methodical fashion the 49ers did, with one notable exception. In any event, here are some observations.

-- First off, the game mattered to the Jags, who remained alive for a bye. Some of their motivation vanished around kickoff when the Titans lost to the Rams, clinching the AFC South. But this wasn't the B team. The Jags played their starting defense all game, recovered an onside kick, and tried their damnedest to win.

-- The 49ers did not take a single shot down the sidelines at either corner in Jacksonville's Cover-3 defense, which was by design. Bouye and Ramsey will start the Pro Bowl, and Bouye hadn't allowed a touchdown all season until Brown held him off with one arm and snagged a bomb from Roethlisberger with the other on Sunday.

In Jacksonville's Cover-3, the front four provide the pass rush, the corners match up on the outside and everyone else plays zone inside. Remember how the Patriots basically avoided Seattle All-Pro Richard Sherman in Super Bowl XLIX? The Jaguars play a similar defense, and the plan will probably be the same. So don't expect much from Brandin Cooks. What he does best -- attack vertically -- plays into Jacksonville's hands.

-- The tight ends and running backs could be in for a big day, however. Pro Bowl fullback Kyle Juszczyk caught five passes for 76 yards, including a 44-yard wheel route as a supposed lead blocker that saw him race past linebacker Paul Posluszny, who had bitten on the run. It's easy to envision the Patriots exploiting a similar matchup with Rex Burkhead, assuming he's healthy.

Garoppolo went a perfect 12-for-12 throwing to running backs and tight ends, with a touchdown to tight end George Kittle. A typical throw: facing a heavy rush on second-and-7 early in the third quarter, he found running back Matt Breida matched up on Posluszny, dumping the ball to him over the middle for eight yards.

-- That play came out of the no-huddle, which San Francisco ran about 10 times. It helped tire Jacksonville's vaunted pass rush, which doesn't do a lot of substituting, particularly inside with defensive tackles Abry Jones and Malik Jackson. Outside pass rushers Calais Campbell and Yannick Ngakoue are relentless -- expect the Pats to have their hands full with the latter on Sunday as he brings pressure from either side -- but much like the Falcons during last year's Super Bowl, they'll be gassed if they're out there forever, and the 49ers punished them with drives of 13, 10, 10, and nine plays.

-- The 49ers softened that front four with 35 rushes, virtually all of them between the tackles, and many right at the 6-foot-8 Campbell, who set a career-high with 14.5 sacks. They were particularly adept at running out of three-receiver sets and targeting nickel defender Aaron Colvin, who basically served as a linebacker against the run. The 6-foot, 193-pounder found himself dodging 312-pound guard Laken Tomlinson on one seven-yard run late in the first quarter.

The runs only averaged 3.7 yards, but they served to bring Jacksonville's linebackers closer to the line of scrimmage and out of the intermediate crossing lanes that Brady will undoubtedly target. Even if Dion Lewis doesn't run wild, early carries will serve a purpose to soften the weakest area of Jacksonville's pass defense, over the middle and down the seams. That's where Rob Gronkowski makes his money, by the way.

-- Garoppolo put some throws into incredibly tight windows, with athletic linebacker Tevin Smith frequently frustrated. On one third down conversion late in the first quarter, Smith sniffed out a Kendrick Bourne slant practically from the snap and jumped the route, only for Garoppolo to squeeze the ball past him by inches.

In the third quarter, he identified the soft spot over the middle and threaded a pass that most QBs wouldn't even attempt, finding Kittle between three zone defenders. A millisecond in either direction, and the pass is picked.

Garoppolo saved his most impressive marksmanship for his final TD, the one we all saw replayed countlessly, when he rolled out inside the 10, stared down a blitzer, and side-armed a laser to Trent Taylor to make it 30-19.

-- Here's one area where Garoppolo holds a clear advantage over Brady. The 49ers frequently bootlegged him to exploit Jacksonville's aggressive pursuit, sending a running back one way and Garoppolo the other. This created lanes for him to throw on the run, something he does exceptionally well.

Whereas Brady primarily sidesteps, shuffles and steps up to avoid the rush, Garoppolo used his mobility to sprint outside the pocket and make plays, twice bringing receivers all the way back across the formation, against the run of traffic, for big gains. Brady has never moved like Garoppolo, and he definitely doesn't throw on the run like him.

-- One of the few throws Garoppolo missed is one that Brady loves. On San Francisco's opening drive, Garoppolo had Bourne wide open about 30 yards downfield crossing towards the sideline. It's the kind of route Brady has dropped over Danny Amendola's shoulder for about 35 yards multiple times this year, but Garoppolo overthrew it. The 49ers rarely looked deep or to the sidelines for the rest of the game.

-- So what do we make of the Sacksonville pass rush? It's almost exclusively the product of the front four, the approach that generally gives Brady the most trouble. An amazing 46 of the team's 55 sacks came from the defensive line, led by Campbell (14.5), Ngakoue (12.0), Jackson (8.0), and Fowler (8.0).

They push the pocket consistently, with the 290-pound Jackson one of the best interior pass rushers in the league, dating back to his days in Denver, and Ngakoue particularly active off the edge. His lone sack of Garoppolo came when he hit a stunt inside, beat his man upfield, and then chased down Garoppolo from behind.

Even if the pass rush doesn't reach Brady, he must still contend with Campbell, whose wingspan makes him a threat to deflect anything over the middle. Garoppolo had at least two passes tipped, and his end zone interception came when Ngakoue hit his arm as he threw.

-- The Jags weren't used to spending so much time on defense and their frustration boiled over in the form of three awful personal foul penalties during second-half scoring drives. The Jags earned flags for taunting, head-butting, and unsportsmanlike conduct. We all know what the Patriots do to undisciplined teams. Jacksonville's offense isn't good enough for the defense to hand Brady 45 yards.

-- The Jags began the game holding opposing quarterbacks to a rating of 65.2 on just 168.9 passing yards. Garoppolo finished with a rating of 102.4 and had 187 yards by halftime. "He knocked out the No. 1 defense in the country," linebacker Myles Jack told the Mercury News. "He did his thing. I guess I have to give him credit. Honestly, he deserves all the credit."

The Patriots don't need any help game planning. The last two times they've faced Cover-3 teams in the postseason they've won Super Bowls, with Brady throwing for 328 yards and four touchdowns against the Seahawks, and a record 466 yards and two scores against the Falcons last year. His completion percentage between those two games tops 70 percent.

Still, it never hurts to see your concepts executed on film, and on Christmas Eve, Garoppolo destroyed the Jags with an approach that can best be described as the Patriot Way.