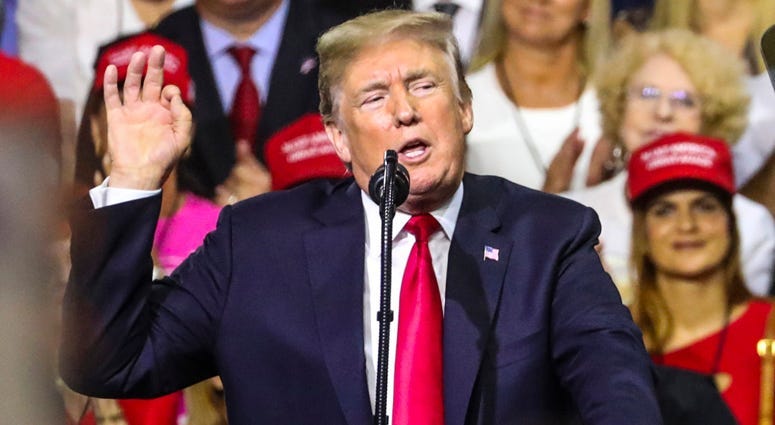 The Red Sox have decided to accept a White House invitation, which is their right. After all, America remains a democracy, at least until the shrugging emoji on my doomsday clock stretches his arms over his head. We had a good run.

I can’t say I’m surprised. Baseball remains the most vanilla sport when it comes to politics. Football players kneel. Basketball players preach social awareness. Hockey players love Canada. But baseball players don’t seem to stand for much of anything.

That makes baseball the perfect sport for the 45th president, whom they’ll be honoring with their presence, and not the other way around.

President Trump is desperate to be associated with winners, but winners keep stiffing him, from the Golden State Warriors to the Philadelphia Eagles to our very own Tom Brady (better late than never).

At this point I could rant about the dangers of normalizing a reckless, narcissistic, amoral president, but America seems to be experiencing a collective Trump fatigue, at least if the midterms are any indication. And somewhere out there, Robert Mueller is warming up with a Louisville slugger in the style of Robert DeNiro’s Al Capone, so maybe this nightmare is about to be constrained. Not even Guccifer 3.0 can save him. We’ll see if president Pence pardons him.

In the grand scheme of the world – California and Paris are burning, autocrats are killing with impunity, democracy is wobbling like Mike Tyson in Tokyo – a baseball team posing for some photos at the White House vanishes in a blink. Trump will flash his waxy Madame Tussaud smile and display the obnoxious thumbs up he uses on Ted Nugent and hurricane survivors and strippers who can’t play Mario Kart anymore and the Pope because they’re all indistinguishable in his very, very large brain, and then we’ll wait for his next angry tweet.

It would’ve been nice to see the Red Sox take a tiny stand for decency, but that’s a tall ask. We knew the Patriots wouldn’t deliver, not with owner Robert Kraft a longtime buddy of Trump and head coach Bill Belichick writing him love letters. At least Brady surprised us. Welcome to the Resistance, Tommy!

Theo Epstein skipped the White House in 2008 because of “family reasons” that in no way related to George W. Bush occupying the Oval Office, no sir, before his family serendipitously cleared its schedule for him to meet Barack Obama after the Cubs won it all in 2016.

Bruins goalie Tim Thomas memorably declined Obama’s invitation in 2012 because . . . he’s a survivalist? Obama was a Nazi? No one would stand up for Catholics? Who can remember something so stupid.

Many criticized both of them by noting that even if they didn’t respect the president, they should respect the office. But in this case, no one respects the office less than its inhabitant.

Previous commanders in chief actually wanted to lead the entire country. George W. Bush removed his shoes in a mosque and declared Islam a religion of peace. Obama said more nice things about police officers than he did about Black Lives Matter, not that you’d know it from the outrage mongers. Bill Clinton memorably told a voter, “I feel your pain.” The elder Bush may have been an oil man, but he shepherded environmental legislation that put a stop to acid rain.

Trump isn’t interested in presiding over a united nation. His political survival depends on division. He plays strictly to his base, that dwindling subset of America that loves the flag, hates liberals, and fears immigrants will march over the southern border and into their vacation homes on a lake in Minnesota.

Trump’s America is a white America and baseball remains a white sport, though maybe not for long. A study of 2017 opening day rosters found the game is nearly one-third Latino and 42.5 percent people of color. It’s only 7.7 percent African-American, however, which helps explain why NFL and NBA players have been far more demonstrative and/or outspoken in their criticism. Baseball needs to fix pace of play before it can enter the culture wars, I guess.

I will not insult Red Sox manager Alex Cora by lecturing him on Trump’s failures after Hurricane Maria. Cora is Puerto Rican and knows the devastation felt on the island a trillion times better than we do. That said, from picking a fight with the mayor of San Juan to blithely shooting paper towels like free throws to obstinately undercounting the death toll to leaving more than half the island without power for months, Trump has consistently treated Puerto Ricans like they’re not American citizens worthy of our sweet, sweet cash. Cora certainly knows this, but assured reporters on Monday, “I’m going to use my platform that right way. I’m not going to embarrass anybody.”

That’s probably the right approach, especially with a president that’s impervious to shame. Ostracization would’ve been my choice, but I guess it’s a free country.