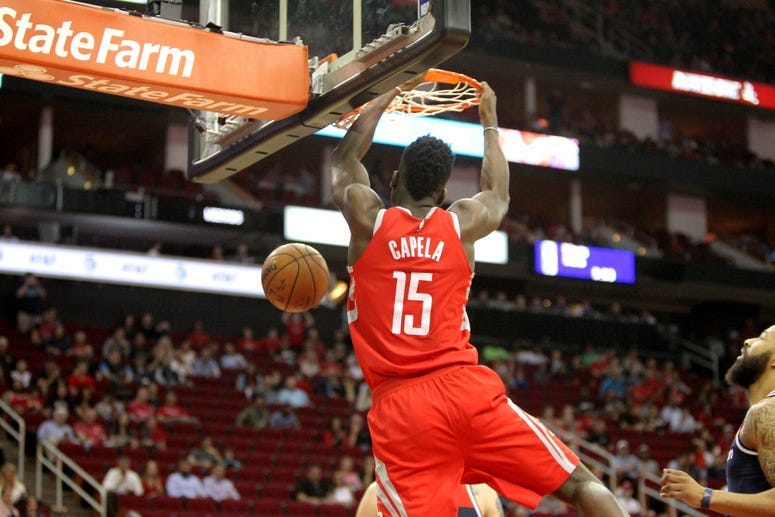 If you're wondering what Robert Williams might look like in the best-case scenario, load up some video of the 2018 Rockets.

Houston's offense was largely about James Harden, Chris Paul, and a bevy of shooters who led the NBA in 3-pointers attempted and made. But all that spacing created lanes to the hoop for an athletic big man. Enter Clint Capela.

The No. 25 pick in the 2014 draft out of Switzerland, Capela boasts long arms and explosiveness that make him a perfect complement to Houston's aerial attack. He's a lifetime .629 shooter whose shot chart resembles a light bulb -- wide around the basket, tapering to the dotted half circle, dark everywhere else. The majority of his attempts are lobs and putbacks.

Outside of a little rolling hook shot, he's otherwise raw offensively, as evidenced by his lifetime free throw percentage of .482 (up from a low of .174 as a rookie), but that's OK, because the other four players on the floor provide plenty of skill.

"When you look at guys with size and how they can impact the game now, he's got good feet, he's a good athlete. He's got a 7-5 wingspan, and he plays way above the rim," Stevens said. "The ability to block shots, the ability to alter shots. The quickness to catch up, to guard shooting if they get a step, being able to still alter that.

"And obviously, if you can have four shooters on the floor and a guy like that rolling to the rim, you can just throw it up in the air and he can go get it and finish it. There's a lot of things that he brings to the table, but those are the things that translate sooner rather than later. As he continues to improve, we'll see where that goes, but right now he's an elite athlete with incredible length."

Celtics big men Daniel Theis and particularly Aron Baynes brought savvy and intelligence to the floor this season, but not necessarily overwhelming athleticism. That said, the Celtics ran their share of pick-and-roll lobs between Marcus Smart and the aforementioned duo, as well as All-Star big man Al Horford.

It's a necessary complement to the rest of their attack, and the middle of the floor projects to be even more open next season if Kyrie Irving and Gordon Hayward return to form, and Jaylen Brown and Jayson Tatum continue developing as 3-point shooters.

"We saw this with Theis this year and Al in the playoffs quite a bit and Baynes -- when you can get a step with size and just throw it up in the air, no matter how consistent the help is at being over, you're going to draw something," Stevens said. "You're either going to be able to get lobs, or you're going to be able to skip it to the corners because they're going to have to over-help, because that threat is just so big. So I think some of the best fives in the game are elite running athletes to the rim, and certainly Robert has shown that he's a very, very good athlete."

Capela represents a ceiling. The 6-10 big man (Williams is 6-9, but with the same wingspan) set career-highs with 13.9 points and 10.8 rebounds last season, and in today's positionless NBA, with some of the league's best lineups trending small, an athletic big man who's active on the glass and at the rim can be a weapon. In the conference finals loss to the Warriors, for instance, Capela averaged a double-double.

Whatever Williams becomes, it probably won't happen immediately. Capela spent most of his rookie year in the G League before emerging as a rotational player in Year 2 and a starter in Year 3. Perhaps Williams will follow a similar path, particularly on a deep Celtics roster that's going to have trouble finding minutes for all of its returning players, let alone a newcomer.

Like the Rockets with Capela, the Celtics recognize that Williams is a project. Maybe one day he'll deliver a similar payoff.