Listening to the Patriots’ (9-1) players and coaches talk about the Cowboys (6-4) this week one thing was clear, everyone in New England respects the level of talent that Dallas brings to Foxborough for Sunday evening’s big game at Gillette Stadium.

The team with an oversized star on the side of its helmet arrives in town with plenty of star players as well as talented depth heading into this battle between two of the NFL’s most popular franchises.

Dallas sports the No. 1 overall offense in the NFL, built upon the No. 1 passing attack and No. 7 rushing game. The Cowboys also have the No. 7 defense in the league, one of only two teams (San Francisco) ranked in the top 10 in both offense and defense at this point.

Quarterback Dak Prescott is playing at an MVP level. Ezekiel Elliott is one of the truly premier running backs in the game rushing behind an elite offensive line. Amari Cooper has been an impact stud playmaker since arriving via trade from Oakland last season.

“They have a lot of threats out there, and I think he does a great job of you can’t really key on one guy. As good as Amari Cooper is, if you go and just try to key on him, Dak can really spread the ball around and get the ball to a lot of different guys,” Patriots safety Devin McCourty said of the latest challenge for New England’s impressive defense. “And I think you saw a lot of that against Detroit, where they were able to spread it around, go to different guys in got-to-have-it moments. So, it’s a game where everybody has to play well. We can’t have just one guy play well. As a group, we all have to play well if we want to have a chance to stop them, obviously starting with Dak, and then with Zeke in the running game.”

Defensively Dallas’ gets off the field on third down, puts pressure on the quarterback and is solid against the run thanks to a pretty athletic, versatile front.

“It’s one of the most talented teams in the NFL that are playing great on offense, defense and it’s going to be a huge challenge for us,” Tom Brady said. “I love it, I love it, I love the opportunity to compete against great teams this time of year, as Thanksgiving approaches and it means a lot for both teams. Every time we play at home it’s important to us but late in the year, we only have so many more chances left to go out there and put on a great performance and we’ll try to do that.”

As many expected, the competition has picked up of late for the Patriots. Last week’s post-bye dogfight against the Eagles was an impressive road win. That obviously followed up the pre-bye loss in Baltimore that saw New England facing questions for the first time all year.

Now, returning home for the first time in a month, New England can continue to prove its mettle against a talented if at times inconsistent NFC contender.

“This is a real good football team coming in here this weekend,” Bill Belichick concluded. “They really do everything well, create a lot of problems in all three phases of the game, very well coached, great players, great personnel. Good situational football team, very explosive team. They put a lot of pressure on you on every single down. So, this will be a big challenge for us, a team that we don’t have very much experience with. But, we’re getting to know them quickly and they certainly present a lot of problems from a preparation standpoint and, I would say, from a matchup standpoint. Real, real good football team, very talented team.

“Like I said, big challenge for us on Sunday here.”

As the talented Patriots finalize preparations for the talented Cowboys, here are a handful of key factors to keep an eye on in what promises to be a highly-rated, highly-competitive affair Sunday evening in Foxborough.

A run for the money – Even though Elliott has been held below 50 yards and 3 yards per carry in each of the last two games by the Lions and Vikings, he and the Cowboys offensive line are a major challenge for the Patriots at-times suspect run defense. With his big new contract in his back pocket, Elliott has five 100-yard games on the season. He’s carried the ball 20-plus times five times. As much as the Cowboys are an elite passing team, Elliott in many ways remains the foundation of the offense. That certainly should be true against a Patriots run defense that still has plenty to prove having allowed 135-plus yards on the ground in four of its last seven games. If the New England defense gets pushed around, as was the case in Baltimore, it could be a long game for the home squad.

Wynn the battle up front – Second-year left tackle Isaiah Wynn has been added to the 53-man roster from IR and is expected to return to the starting lineup against the Cowboys. He’s also expected to be a major upgrade over journeyman fill-in Marshall Newhouse and help improve things in both the ground game and passing attack. That’s a lot of pressure for a guy who’s played exactly 82 career offensive snaps, even if he is a first-round pick. Wynn returns to work against a Cowboys’ front that has the ability to get after the quarterback with DeMarcus Lawrence, Robert Quinn and even former short-time Patriot Michael Bennett. Given some health questions with his targets, Brady may need a little extra time in the passing game. It sure would be nice to finally get something going in the ground game. Wynn faces major expectations in his return and the entirety of the Patriots offensive line faces a major challenge in the Cowboys front.

Third down battle – New England’s No. 1-ranked third-down defense has been one of the key building blocks in the unit’s overall success. Dallas just so happens to field the NFL’s No. 1 third-down offense. That should make for a fun battle in what many refer to as the money down. Whichever side plays up to its strength that has been established over two-plus months of work should be well on its way to controlling the game. Sure the Cowboys put up big plays to key their offensive attack, but that’s not something the Patriots give up too much of. If the visitors stay on the field on offense and put together long drives it not only gives them scoring chances, but also gives the struggling Brady-led offense fewer opportunities. This is a heavyweight battle between two talented third-down units.

Coaching wild card – Few would question the kind of talent that Dallas possesses. But most would question the team’s coaching. Jason Garrett has been a mainstay on the Cowboys’ sideline but his credentials are questionable at best, even if he did draw praise from Belichick this week. As is so often the case, the matchup of head coaches is a mismatch in the Patriots’ favor. The other coaching question for Dallas is in regards to veteran defensive coordinator Rod Marinelli, who has his schematic roots in the Tampa 2 scheme. The funny thing about the Tampa 2 scheme is that Brady almost always chews it up and spits it out in the form of a ridiculously impressive performance. Last time these teams met, Marinelli mixed things up on defense and Brady had to adjust. Dallas can’t just sit back in zone and be predictable, especially with star linebacker Leighton Vander Esch suddenly expected to miss the game with a back issue. The Cowboys have the talent to pull off an upset in New England, the big question is whether they have the coaching to pull together what could be a season-defining type road win.

If there’s a catch… -- Brady has shown obvious frustration with the Patriots limitations on offense and a lackluster passing attack built around Julian Edelman, James White and not a whole hell of a lot else. That core of targets could be even more limited against the Cowboys as Mohmed Sanu missed practice due to an ankle injury suffered against the Eagles, while Phillip Dorsett was limited due to a concussion suffered on his touchdown in Philly. Oh, and while Edelman is no longer listed as dealing with a chest injury, he’s now limited due to a shoulder problem. There is a real chance that rookies Jakobi Meyers and N’Keal Harry will have to see increased reps against Dallas. Are those guys ready for the bigger role and, more importantly, is Brady ready to turn to them in a time of need? Maybe throwing to Edelman, White and veteran tight end Ben Watson is enough. But more likely it’s going to take a more diverse passing attack to defeat Dallas. There is no question that New England’s talent and limited depth at receiver is being tested right now, as is Brady’s patience with his passing game.

Prediction – If offensive star power is how you win these days in the NFL, then the Cowboys clearly have a chance for a big upset win Sunday at Gillette Stadium. But there is often more to winning than just having a fantasy football trio like Prescott, Elliott and Cooper. Coaching, situational success and, maybe most importantly, turnovers play a huge role. All three are an advantage for Belichick’s team in this battle, most notably New England sitting at plus-18 on turnovers this fall while the Cowboys are minus-1. Expect the Cowboys to try to run the ball early and often against New England. If they get things going on the ground and stick with it, it will put the Patriots in a bind. But it also is worth noting that Dallas’ defense has given up 24 or more points in four of the last six games, including to Lions’ backup passer Jeff Driskel and Sam Darnold’s Jets in New York. So Brady and Co. have a chance to make some plays. Wynn’s return should help. Maybe, just maybe, this is the week Sony Michel gets going against a run defense that does allow 4.2 yards per carry. Most likely, though, the Patriots are going to be in another dogfight with a quality opponent. The game could very well be in question in the fourth quarter. A key play, maybe a turnover, could decide things. It’s a dangerous game to play with a limited margin for error, but in that scenario there has to be faith that Belichick and his proven defense will find a way to pull out a victory. As good as the talent is for Dallas, it’s just hard to expect them to step up to the formidable challenge of trying to pull off the upset in Foxborough, where the Patriots haven’t lost in more than two years. So, we’ll go with the 21-20 victory for Belichick, Brady and the defense. It won’t be easy, but in the end only the final score matters. 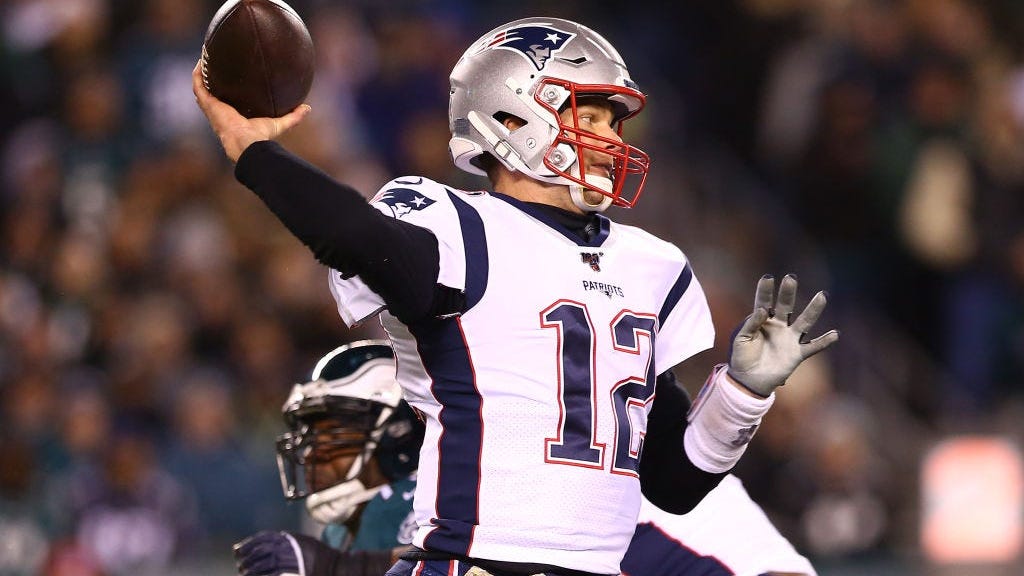