FOXBOROUGH -- Wind, rain and another dogfight victory for the Patriots were the story of the action Sunday evening at Gillette Stadium.

New England (10-1) once again needed key contributions in all three phases of the game to come away with the sloppy 13-9 win over the Cowboys (6-5).

Bill Belichick’s team got out to the 7-0 lead after a blocked punt gave Tom Brady and company a short field to a pretty N’Keal Harry 10-yard touchdown.

That score held up into the fourth quarter when Brady led a drive to Nick Folk 42-yard field goal for the 13-6 advantage. Dallas answered that score, though, with a drive to its own short field goal to make it 13-9.

The Patriots defense -- which once again played extremely well and forced a key turnover on a Stephon Gilmore first-half interception -- made sure the game ended that way.

Before moving on to next Sunday night’s game in Houston against the Texans, here are some of the personnel highs and lows from the Patriots win over Dallas.

Sony Michel – The second-year back had a 13-yard run around left end on the Patriots first offensive snap and went on to have one of his best games of the season. By halftime, Michel had 54 yards on just 10 carries. His production slowed a bit in the second half, though he did pick a big first down to help run the clock out in the final two minutes. Michel finished with 20 carries for 85 yards. Still, it was a productive day.
N’Keal Harry/Jakobi Meyers – With both Phillip Dorsett and Mohamed Sanu inactive due to injury, Brady needed some contributions from his rookie receivers and he got just that. His first-round pick Harry notched a spinning, back-shoulder 10-yard touchdown in the left side of the end zone for the 7-0 lead. It was an early, key impact play even if it was his only catch of the day. Meyers had a bit more production, finishing with four catches for 74 yards, including a big play, breaking a tackle and making a nice cut on a 32-yard gain.
Julian Edelman – Despite clearly being limited due to a shoulder injury that affected his range of motion trying to catch the ball, Edelman gutted through to be his usual productive self. A game-high 12 targets resulted in eight catches for 93 yards, nearly half of the Patriots overall passing attack. Edelman has stepped up to the challenge, despite battling injury, all season.
Matthew Slater/punt block – For the third time this season, New England got a boost from its punt block team as it continues to play impact football in all three phases. Slater blocked Chris Jones’ punt inside the Dallas’ 30 in the first quarter with Nate Ebner fighting for the recovery at the Cowboys’ 12. One play later Brady hit Harry for the 7-0 lead. Later on, the punt block team forced the Cowboys into a delay of game penalty and an illegal shift call on consecutive snaps.
Jamie Collins – As has been the case more often than not this season, Collins was all over the field in the first half against Dallas, hitting halftime with a game-high eight tackles as well as a forced fumble on Blake Jarwin. Collins production also slowed in the second half, but the versatile linebacker remains a stalwart on Patriots defense that put forth another impressive day of work.

Drops – Tom Brady finished with some suspect numbers – completing just 17 of 36 passes – but actually played relatively well given the weather and an elbow injury that reportedly kept out of practice for most of Friday. Brady was a victim of a number of ugly drops by Julian Edelman, Jakobi Meyers and N’Keal Harry.
Offensive line – Second-year left tackle Isaiah Wynn slid back into the starting lineup, but all was not fixed for the much-maligned New England offensive line. Wynn whiffed on a block for a pressure then was beaten for a Robert Quinn strip sack on consecutive plays to force a punt in the first quarter. Marcus Cannon battled illness, and when he left for a period of time Marshall Newhouse struggled at right tackle. Shaq Mason allowed a sack. The group had issues once again on screens, including one for a loss to settle for a field goal in the fourth quarter. The line still has plenty of work to do, especially in pass protection.
Nick Folk – After two weeks of perfection on his attempts in his first two games in New England, Folk became the latest question mark at the kicker position for the Patriots. Certainly the rain and wind made the conditions less than ideal, but Folk missed a 46-yard field goal wide right and then pushed a second wide right from 48 yards out on the final play of the first half. Folk did hit from 42 yards in the fourth quarter. New England is now just 2-of-6 on field goal attempts longer than 40 yards this season. 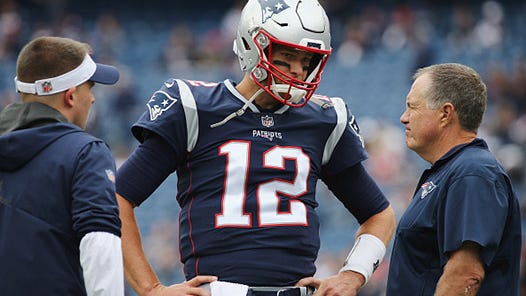 Tom Brady on Possibly Playing Elsewhere in 2020: 'There's No Prediction'