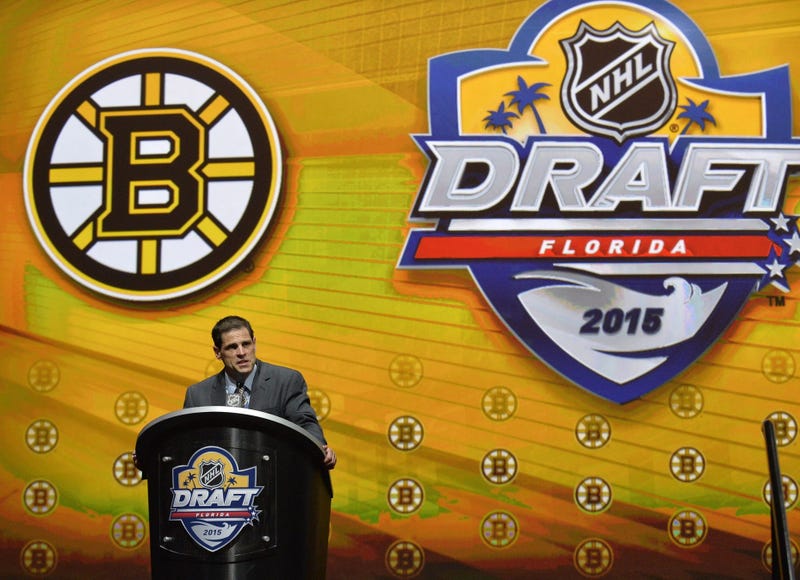 Don Sweeney took over as Bruins general manager on May 20, 2015. The following week was chaotic to say the least.

The 2015 NHL entry draft occurred just six days later after he received his promotion from assistant general manager, one in which Sweeney oversaw the Bruins’ three first round selections. Sweeney’s debut at the draft occured on the heels of widely scrutinized trades of promising blueliner Dougie Hamilton for a slew of draft picks and beloved power forward Milan Lucic for Martin Jones, Colin Miller and a first-round pick. A bold strategy, the new-look Bruins would keep most of their top tier players while bringing in an abundance of young, promising talent to refill their previously barren prospect cupboard. Sweeney’s selections would be heavily scrutinized as the Bruins attempted to rebuild on the fly.

The Bruins passed on stars such as Mathew Barzal, Kyle Connor and Brock Boeser, who have combined for 88 goals and 207 points in the NHL. Local and national media outlets berated Sweeney and the Bruins for whom they overlooked and labeled the draft a cataclysmic failure.

The Bruins selected Jakub Zboril, Jake DeBrusk, and Zach Senyshyn. All three failed their conditioning tests at rookie camp, dropping the public evaluation of the picks to its nadir. Since then, the three have progressed substantially. DeBrusk emerged as a top-six forward and was arguably the best player on the team in the Bruins second-round playoff series against the Lightning. Zboril’s improvement has placed him among the pinnacle of Bruins’ prospects and in a position to challenge for a roster spot in Boston this coming season. Senyshen is still adjusting the pace of the game at the professional level. Another year of honing the finer points of his game could make a world of difference and would vault him into contention for a spot in the Bruins bottom six.

The tremendous drafting in the middle rounds of the 2015 draft is often overshadowed by the flurry of first-round picks. Brandon Carlo, still just 21 years of age, is a building block on the right side of the defense. He thrived alongside Zdeno Chara, who was able to buttress the rookie defenseman while battling the opposition’s best forwards. Charlie McAvoy replaced Carlo opposite Chara this season, and Carlo’s defensive shortcomings were exposed. Nonetheless, Carlo’s rise from 37th pick to capable NHL defenseman has impressed.

Jakub Forsbacka-Karlsson and Jeremy Lauzon also heard their names called by the Bruins in the second round. Both names galvanize the fanbase, as they ooze potential.

Forsbacka-Karlsson, the former Boston University center, could replace Riley Nash as the team’s third-line center should management fail to re-sign the veteran. Lauzon challenged Matt Grzelcyk for the open left-shot defense spot last training camp. Despite a strong showing, Lauzon was assigned to Providence and turned heads with a commendable season. Often omitted in the conversation among Bruins top prospects, especially given the wealth of options on defense, Lauzon could be the most formidable of the group. Daniel Vlader, a third-round pick, is the team’s top goaltending prospect (although there is not much capable competition), and fourth round pick Jesse Gabrielle has all the makings of a bottom-six power forward. Despite initial heavy criticism, Sweeney drafted a crop of future NHL talent in the 2015 draft.

The 2016 NHL draft rolled around, and Sweeney crushed it.

The Bruins nabbed Boston University star Charlie McAvoy with the 14th overall selection and he immediately blossomed into a star. He recorded 32 points and posted a 54.8 Corsi for percentage as he cemented himself as one of the NHL’s finest rookies. Later in the first round, the Bruins selected large, physical center Trent Frederic, which bemused many. After recording uninspiring numbers with the United States developmental team, Frederic’s offensive output exploded at the University of Wisconsin, where he recorded 0.98 points per game. In 13 games in Providence, Frederic scored five goals and notched eight total points. If he continues to pile up points, Frederic will be sporting a spoked-B sooner than later. 2016 second-round choice Ryan Lindgren comprised the main piece of the Rick Nash trade. The venerable prospect was dealt to help alleviate the logjam of up-and-coming left shot defenseman.

In 2017, the Sweeney oversaw the selection of Finnish defenseman Urho Vaakanainen. He recently inked a three-year entry level contract and will contest for a roster spot this summer, after demonstrating refined defensive capabilities in Finland’s top league as a 19-year-old. Second round pick Jack Studnicka was a stud in the Ontario Hockey League, recording 72 points in 66 contests. He posted five points in five games upon joining the Providence Bruins down the stretch. Fourth-round selection Jeremy Swayman impressed during his freshman campaign at the University of Maine, as he started 30 games and posted a .921 save percentage.

The Bruins have hoarded talented defenseman and centers, yet experience a dearth of goaltending prospects to eventually replace Tuukka Rask between the pipes. In his 21 selections, Sweeney has chosen seven centers, three wings, nine defensemen, and two goaltenders. All three wings were picked in the 2015 draft. As such, the Bruins have a bevy of future NHL defensemen and are ripe with talent through the middle of the ice, yet are lacking on the wings. Sweeney’s draft strategy could mirror an on-ice view of the game, where centers and defensemen control the pace of play and puck possession.

While Sweeney’s late round draft picks do not project to crack an NHL lineup, his notable collection of skilled players amassed in the first and middle rounds of the draft feature plenty of NHL talent. The criticism he faced after the 2015 draft is a misnomer, as he has assembled a system of prospects who can contribute at the NHL level.