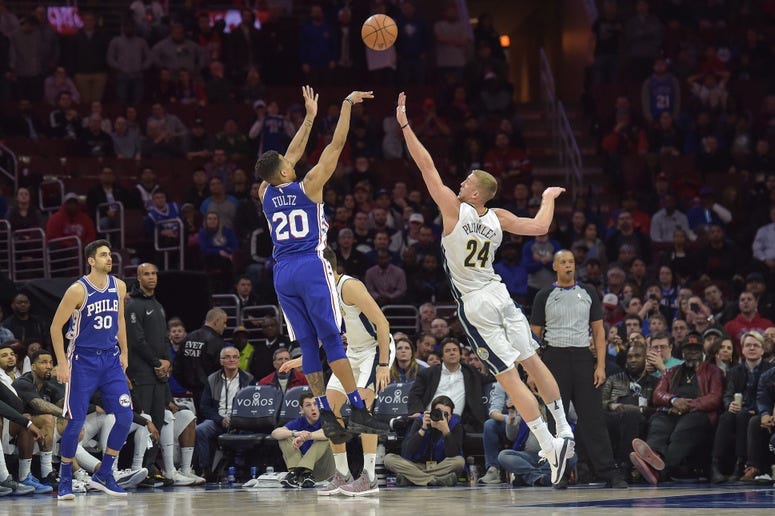 Markelle Fultz returned to the NBA on Monday night and had 76ers fans appropriating Nordic chants by the end of a performance that showed glimpses of the talent that made him the No. 1 pick in the draft.

Fultz became the first player since -- irony alert -- Danny Ainge to score 10 points and dish out eight assists in fewer than 15 minutes of play in Philly's 123-104 destruction of the Nuggets.

Sidelined since the fifth game of the season while dealing with a shoulder injury that mysteriously robbed him of his shooting form, Fultz went 5-for-13 from the field and also grabbed four rebounds while compiling a plus-16. He shot an airball and had three shots blocked in the early going before settling into a rhythm and making a pair of contested jumpers late in the game as Sixers fans chanted his name while clapping above their heads in unison in a play on the Vikings' chants of "SKOL."

Fultz's return galvanized a fanbase that is already dreaming big, with its young core of Ben Simmons and Joel Embiid leading the team towards 50 wins and a top-four seed in the Eastern Conference. With sharp shooters J.J. Redick and Robert Covington bombing away, the Sixers should be a trendy pick this postseason as The Team No One Wants to Play.

The Celtics traded the rights to Fultz to the Sixers before the draft in order to move down to three, where they selected surefire All-Rookie selection Jayson Tatum. They also obtained what could be Sacramento's lottery pick next year.

So while the C's should have no regrets over the deal, it's worth noting that the 19-year-old Fultz was drafted No. 1 for a reason, at least until his shooting mechanics deserted him. The 6-foot-4 guard is quick off the dribble and creative at the rim, as he proved with one acrobatic finish and another sneaky one.

The final verdict on this deal won't be rendered until Fultz gets a season or two under his belt. Monday night certainly represented a good (second) start.