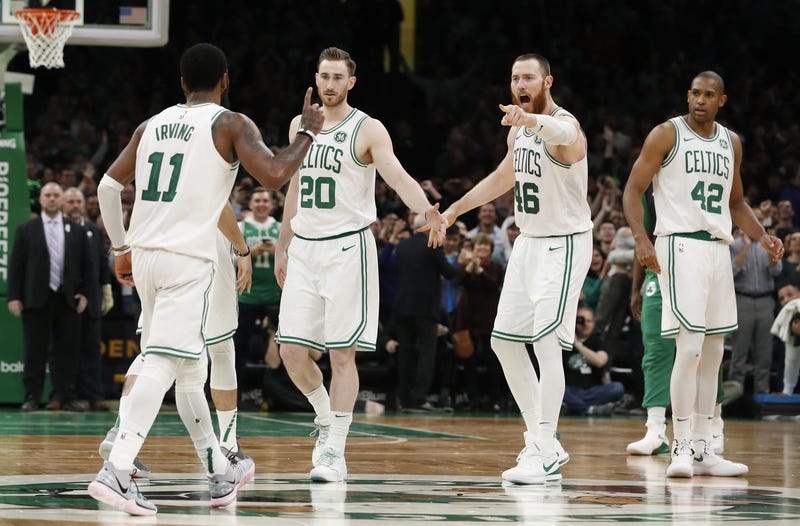 When the Celtics dropped of four of five games following a relatively successful west coast road trip, Brad Stevens knew it was time for a change.

He needed a spark. For a significant stretch of games, Boston lacked intensity, sense of urgency and size.

Injuries to big men Al Horford and Aron Baynes didn't help the problems plaguing his front court on the defensive end as opponents were racking up points in the paint and dominating in the rebounding category. But with Baynes' minute-restriction lifted and Horford returning back to form, Stevens decided to go with a bigger, defensive-minded front court in an effort to grab momentum for the Celtics as they fight to grab home court advantage throughout the first round of the playoffs.

He pulled Marcus Morris from the starting unit and inserted Baynes to compliment Horford, and so far the results have paid off. With Baynes in the middle, he's helped the Celtics show resiliency on the defensive end -- where they've made stops at the rim, are out-rebounding opponents and fighting for wins.

"He had to," Stevens said after the Celtics' 114-112 win over the Pacers Friday. "We needed him to and we just haven't had him and Al healthy for very much of the year so it's been hard to play them together. Plus, with all of our depth on the wing it's hard to find minutes for everybody when those guys are playing together but it's nice to have them back. It's nice to have them available and we need to have that as an option moving forward."

For the first time this year, Baynes clocked in over 30 minutes, pulled down a season-high 13 rebounds while Horford poured in 19 points and finished with three blocks.

Although it's been a small sample size -- one set of back-to-back wins -- the Celtics won an important game over the Pacers Friday night, one that had playoff implications written all over it. Boston is now tied with Indiana for the fourth seed in the Eastern Conference with a golden opportunity to pull ahead between now and next Friday in a rematch in Indiana.

However, the Pacers didn't go down without a fight. Indiana made a statement as they proved that they can certainly keep up with the Celtics on both ends of the floor and nearly stole a win at TD Garden -- which would have been a devastating blow for Boston's hopes of holding onto fourth place.

It took a 20-point second half, including a game-winning layup by Kyrie Irving (30 points) to seal the win as the Pacers responded to two 5-0 Celtics runs in the final frame before Irving broke the tie with 0.5 left on the game clock.

"It was definitely a great pre-fill out game, if you want to call it (that), for the playoffs," Irving said. "Home court advantage was at stake and we see them again one more time. We'll see how that goes and just keep on getting better for the rest of the regular season."

The Pacers' well-balanced scoring attack led to six players in double figures, including a team-high 27 points from Bojan Bogdanovic and 18 points by Thaddeus Young. Big man Myles Turner provided the rim protection, his defense in the paint prevented the Celtics from running away with their two-possession leads down the stretch as Indiana applied pressure on the Celtics' chances of climbing away with a much-needed win.

It was a nail-biting contest between two teams destined to meet in the opening round of the playoffs with home court advantage on the line between now and the end of the regular season.

"We just had to be resilient," Irving said. "They do a great job of mucking up the game, being in the paint. Myles (Turner) does a great job of coming over and contesting a lot of shots but (Aron) Baynes was in the middle of the paint tonight so it was hard for him to come over and commit a few of our layups -- which enabled me to get a few easy ones where he sealed Myles.

"He did a great job tonight and just played with that pace and playing with that physicality to match theirs."