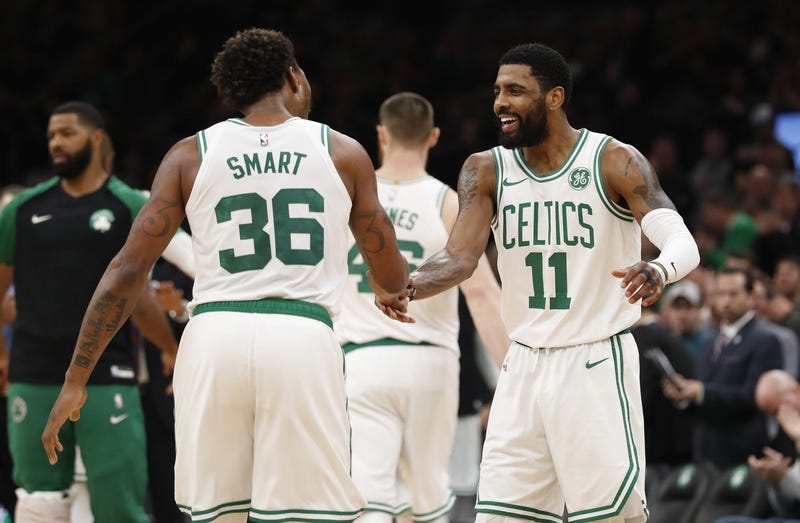 Kyrie Irving appeared disinterested in discussing the topic of racism among black athletes in Boston, following a 114-112 win over the Pacers Friday night. For the Celtics point guard, the topic of racism in America goes far beyond the basketball court or the city he plays for.

While he's heard awful stories about basketball players hearing racial slurs thrown at them -- like the one DeMarcus Cousins received at TD Garden back in January -- Irving was reluctant to classify Boston as a town that perpetuates the stigma of a racist city.

"That's an opinion that can be shared amongst a lot of different people over the course of a lot of different eras," Irving said. "I, myself, can only speak for playing here as an opponent -- I've never heard anything like that but I can only go off of hearing stories. When you hear something like that, especially from people of color, I gravitate towards being on anyone's side -- as long as it's the right side."

Fan interaction has become a growing problem in the NBA. Unlike other professional sports, outside of baseball, the NBA is unique in how close fans are to the action -- things said to players are merely an earshot away, whereas in the NFL or NHL, there's a barrier between the crowd and its players.

One heckling fan got the best of Kevin Durant in Dallas earlier this season, which led to the enraged Warriors forward to yell back at the fan while he was on the court and in front of cameras. However, what Russell Westbrook endured in Utah was a clear example of a fan crossing the line when the Jazz fan called Westbrook the n-word and was ultimately banned for life.

"Really what matters is treating people with respect," Irving said. "That's really what it comes down to. I think sports -- there's really a gray area, where sometimes fans can say really hurtful things. They treat us -- I said some fans, not all fans -- sometimes, some instances come where it goes way beyond basketball and that's a personal thing. It matters to all of us because we have kids, we have families that we represent. We represent very different background.

"I think coming to Boston has been an eye-opening experience for me, just getting the experience to know Boston. I haven't really heard too much about stuff like that but hearing about it -- it's a little saddening. Not just in Boston but as an NBA player, hearing another NBA player go through something like that, it's just terrible or any athlete, hearing racial slurs."

You don't have to go too deep into the Boston sports history books to find a report about the last time a black professional athlete was called a racial slur, it was in 2017 when Orioles outfielder Adam Jones claimed he heard the n-word at Fenway Park. The perpetrator was never identified, still, the topic of racism in Boston became a nationwide headline.

Still, Irving reminded reporters that racism is a national problem, not necessarily a Boston issue, and for people who experience it every day, it's a conversation that should be discussed more often, and not only when it involves a professional athlete.

"Racism still exists in our society, it happens every day," Irving said. "I don't want to limit it to just us athletes. A lot of people go through a lot of racial tension -- it's a terrible thing in our society.

"I don't want to get into a comparison. At one point or another, things happen like that. Like I said, I don't ever want that to happen to anyone. Whether you're walking down the street or whether you're playing an NBA basketball game. In today's society there's no room for that, we can't accept that."