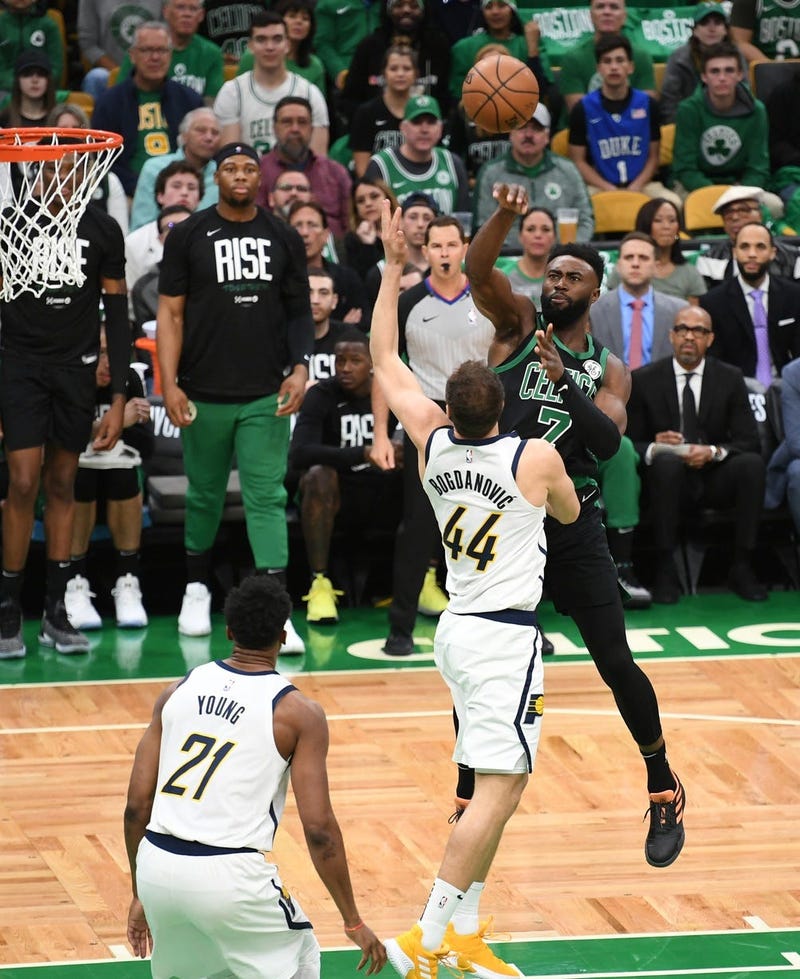 Game 1 between the Celtics and Pacers was a physical matchup from start to finish.

Celtics head coach Brad Stevens, along with Pacers head coach Nate McMillan, expected to see the same level of physicality that we saw between the two teams in their final two regular season matchups but in the final four minutes of the Celtics' 84-74 win, tempers boiled over between Jaylen Brown and Bojan Bogdanovic. After battling through a screen, Brown shoved Bogdanovic and earned himself a technical foul.

It was a retaliation move by Brown that happened moments after the two exchanged words over a subtle push from Bogdanovic occurred prior to Brown earning a tech. Gordon Hayward and Aron Baynes quickly intervened while Bogdanovic's teammates separated the two. Kyrie Irving, who pulled Brown aside, said he had a brief conversation with his teammate.

"I'm like, 'we're in a long series with these guys,'" Irving said to Brown with a smile. "Emotions can get the best of you but once you settle in, you let all that go, then it's time to move on to the next thing. Guys are getting pushed, guys are getting fouled. We understand the magnitude of the moment and you can't let the moment get too big for you."

Without getting into exactly what transpired on the previous play that led to Brown's frustration, Irving said he understood why the Celtics third-year guard did what he did. However, there are other, better ways to get back at the Pacers forward, Irving explained.

"I hate to say this but if somebody pushes you down, it's like you have to get them back somehow, someway on another end or another game and just save it, and really perform at that next level," Irving said. "That's the maturity of this league. We all have instances where we're challenged and things don't go our way, and it's how you respond that's the most important thing. J.B. had the right to do what he did but after that, they shoot a technical -- I just think about the circumstances, if they were different."

Luckily for the Celtics, there was a late fourth-quarter, 22-point lead intact. Brown's technical foul didn't affect the outcome of the game.

"If it were a four-point game, if it's a three-point game. That stuff happens, then it can change the whole momentum of a game. Instead of being up five comfortably with five minutes left to go in the game, now you're down four or they're up four or we're up four. Anything can happen. In that moment, I was just like, J.B., 'You're good, we understand your frustration but now it's just time to move on to the next thing.'"

"That's always going to be my advice for everything throughout these series," Irving said. "Anything can happen. Anything can impact the game, you never know, so control what you can control. Go out there and perform."