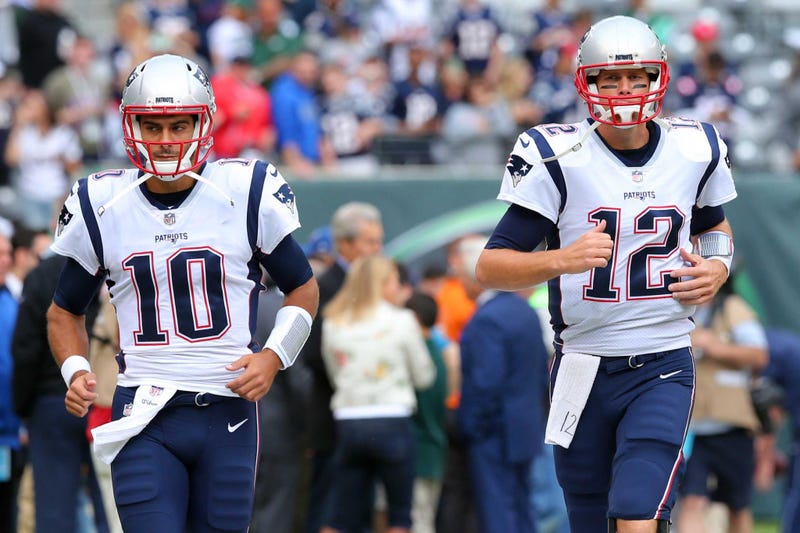 Welcome to Friday’s Morning Mashup. For the latest news, start at our WEEI.com home page or click here for the top stories from our news wire.

-- It turns out Bill Belichick is not the only member of the Patriots organization who still exchanges texts with Jimmy Garoppolo.

During an appearance on Freakonomics Radio's The Hidden Side of Sports, Garoppolo said he and Tom Brady are still in touch.

"We always had a good relationship,” the 49ers quarterback said.  “Initially when I was younger, kind of like an older brother type of relationship, but as I got older and matured through the NFL, we became closer and we became good friends. You know, we still text here and there. Jacoby was a good friend of mine, too.”

"So, the three of us always were texting each other,” he continued. “Everyone said it was a terrible decision to have the same agent (Don Yee), but I think it worked out very well. Our agents look out for both of us, both of our best interest. But at the end of the day it's the NFL. It's a business."

The 49ers and the Patriots are both 1-1 so far this season, with Garoppolo's first NFL loss as quarterback coming in Week 1 against the Vikings.

-- The Cleveland Browns won their first game since 2016 on Thursday night and the celebrations commenced immediately.

When the Browns snapped their 19-game losing streak with a 21-17 win over the Jets, the fridges of Bud Light around the stadium opened and the fans could finally enjoy it.

“Did they open the bud light things” -Baker MayfieldYes Baker.  YES THEY DID.Dilly Dilly to all and to all a goodnight. #ClevelandThisBudIsForYou@Browns pic.twitter.com/VsF0EiRLKo

Cleveland, the @Browns won. The fridges are open. Go celebrate with a Bud Light. You’ve earned it. pic.twitter.com/RvjJ0WvpyO

RETWEET IF THIS IS HOW YOU FEEL RIGHT NOW pic.twitter.com/L1k4b3VMKE

When you win a game. -- pic.twitter.com/XgU6YXuH0m

Also, during the game a fan caught a possum in the stands with his bare hands so maybe that was the good luck charm.

Nbd, just a Browns fan catching a possum tonight at the stadium pic.twitter.com/MxMWFWh4jS

QUOTE OF THE DAY: "I saw that same tweet last night. My man, Red Sox Stats. That guy is amazing.” -- Alex Cora, on the Red Sox Stats Twitter account and a tweet from the account about the Red Sox’ aggressiveness at the plate