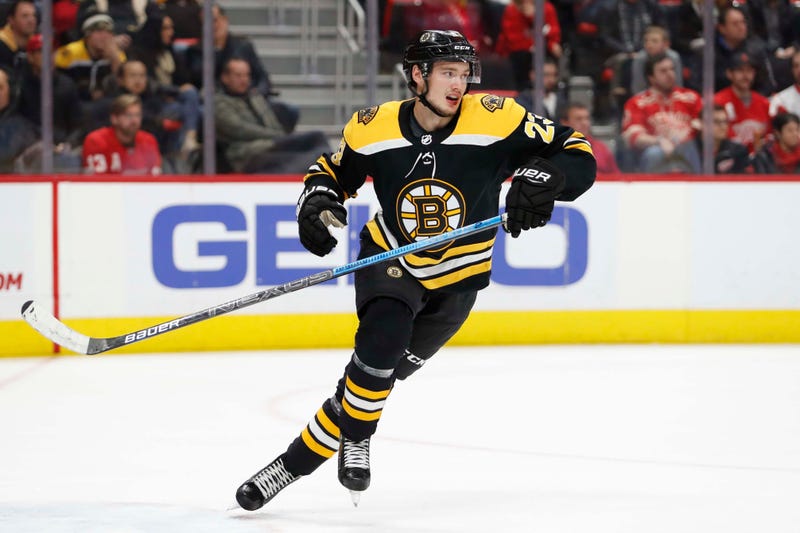 One has to wonder if a train was barreling toward Jakob Forsbacka Karlsson and his foot got caught in the tracks if he would be fazed.

Because the idea of having to go head-to-head with either Sidney Crosby or Evgeni Malkin on Friday night didn’t get a rise out of the Bruins rookie center after he took line drills at Boston’s morning skate with Brad Marchand and David Pastrnak on his wing.

Centering that line the 22-year-old is almost guaranteed to see a lot of one or both of Pittsburgh’s superstar centers.

“Yeah well I think every player in the league here is a good player,” Forsbacka Karlsson said. “But like you said you always got to be able to defend against the best players in the league too as well as produce offense.”

One person that does appreciate how much more responsibility Forsbacka Karlsson is going to have is coach Bruce Cassidy, who has made the decision to bump the rookie up the depth chart based on less than nine minutes of strong of ice time Wednesday in Detroit, and one goal scored in each of the Bruins’ past two games by the Swede.

With the Bruins lineup stressed by the injury absence of Patrice Bergeron, Cassidy has limited options. Cassidy said last weekend that he didn't think Forsbacka Karlsson was ready for tougher assignments, but the coach liked what the center did between Marchand and Jake DeBrusk over the second and third periods on Wednesday (Forsbacka Karlsson centered the third line in the first period). Forsbacka Karlsson scored a goal, missed most of the rest of the second period after he took a puck to the mouth and the skated a regular shift in the third period.

That was enough to earn the kid the ultimate assignment -- Bergeron’s replacement on one of the best lines in hockey against one of the best one-two center punches in the game.

“I thought he was very good when we moved him up in Detroit. Played harder. Literally broke two or three teeth, kept on playing,” Cassidy said. “But he was in the right spot. I thought he skated well.

“The main message with JFK is if you’re skating everything will fall into place. He’s a very good skater, he’ll find the battles, the battles will find him, he’ll make his plays because he’s moving. And he was skating the other day. So we’ll give him a little bit more and see how it goes, we can always switch that in the game.”

Cassidy also said he likes Joakim Nordstom better on the wing. But if things go awry and the Bruins aren’t able to control the matchups the way they should on home ice, expect to see Nordstrom move up the depth chart posthaste.

*Jaroslav Halak makes the start in net against the Penguins with Tuukka Rask scheduled to start Saturday in Montreal.

*Other lineup changes: John Moore comes back from three games out with a lower-body injury and replaces Steven Kampfer. That means the two rookie defensemen – Jeremy Lauzon and Connor Clifton – stay in instead of the veteran.

And Colby Cave will make his season debut, centering Nordstrom and Noel Acciari, while Anders Bjork becomes a healthy scratch.