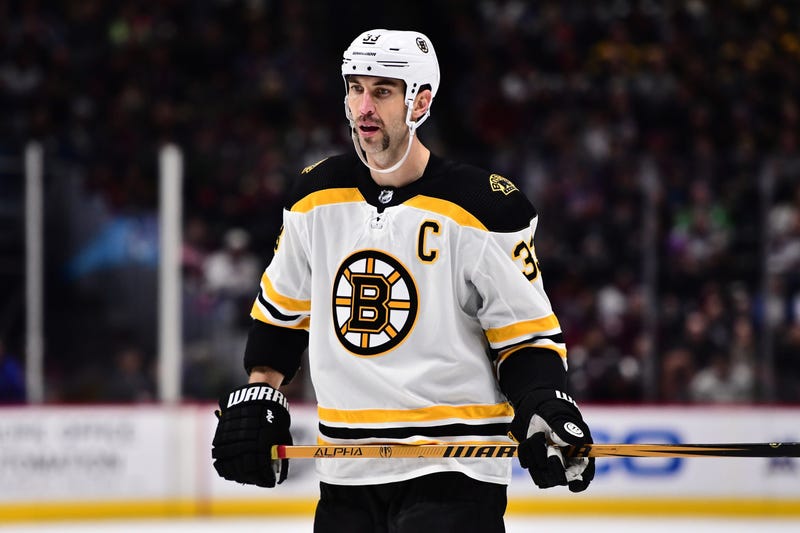 There were nine goals scored, David Pastrnak scored again, David Backes got his first point of the season and the Bruins blew a two-goal lead, but there’s just one thing you need to know about the Bruins’ 6-3 loss at Colorado on Wednesday.

When the Bruins returned to the ice after the first intermission they had a 2-1 lead but they didn’t have their captain. The Bruins later announced Chara would not return to the lineup because of a lower-body injury, and NESN later found the play where it seemed Chara was injured after a hit on Avalanche forward Carl Soderberg.

Could be a knee injury for Zdeno Chara, this doesn’t look good (will not return tonight) #NHLBruins pic.twitter.com/H9urtRFWny

Although Chara’s injury might not have deflated the Bruins, it definitely inspired the Avalanche to be even more aggressive and get all over the shorthanded Bruins defense on the forecheck and in front of goaltender Jaroslav Halak.

Jake DeBrusk’s second goal of the game gave the Bruins a 3-1 lead 3:05 into the second but from there Colorado owned the game, outshooting the Bruins 7-4 in the second period and 11-9 in the third.

Chara’s absence was most glaring on the penalty kill and the Avalanche took advantage to get within 3-2 on a Mikko Rantanen goal. The Bruins were forced to try to kill the penalty with John Moore and Jeremy Lauzon as their defense pair. Maybe no one would’ve been able to stop the dynamic Rantanen during that man-advantage, but Chara certainly would’ve had a better chance than what the Bruins had left in their defense corps after Chara’s injury.

The dominoes kept dropping from there. Steven Kampfer, who played a season-high 16:31, made an ill-timed pinch early in the third period, leading to Matt Calvert’s game-tying goal. After Nathan MacKinnon scored the game-winner at even-strength the Avalanche tacked on two more power-play goals against the Chara-less penalty kill.

There was no update on Chara’s status after the game and the “cone of silence” will surely be in full effect until Chara is either determined to be out long-term or makes a rapid recovery. What the Bruins won’t be able to hide is their need for defensive help, and it’s doubtful Jakub Zboril, on the road trip as the seventh defenseman, will be able to make a big enough impact.

Kevan Miller is on the trip so he can skate with the team and possibly return from his hand injury. The Bruins may have to see about accelerating his timetable (coach Bruce Cassidy had said the Bruins were targeting next Wednesday in Detroit for Miller’s return) while also holding out hope that Charlie McAvoy or Brandon Carlo will be healthy enough to join them this weekend when the Bruins visit Dallas (Friday) and Arizona (Saturday). McAvoy and Carlo stayed back in Boston when the Bruins left for their road trip.

Otherwise the Bruins might have to make do with what they have, and that won’t be pretty against a couple teams that like to play at a pace almost as fast as the Avalanche.

Here are a couple more notes from the loss:

*Snow’s coming to New England and it might also be hitting hell. Backes got his first point of the season, an assist on Pastrnak’s power-play goal. It took him 13 games but the $6 million man finally got on the sheet. He also hit the post with a shot, so maybe life on the fourth line is agreeing with him and he’ll find a way to contribute more than leadership to the Bruins’ cause moving forward.

*Pastrnak now has a league-leading 17 goals in 18 games. He’s in some elite company.