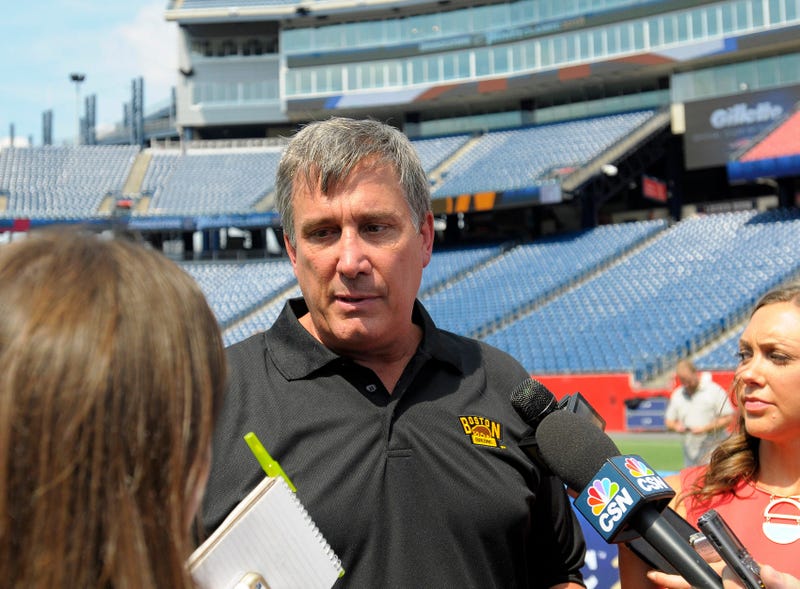 The Bruins have scored 25 5-on-5 goals during their 7-3-2 start, but just 11 have come from players not named Patrice Bergeron, Brad Marchand and David Pastrnak.

Bruins president Cam Neely knows his team can’t accomplish the things he wants it to with just one forward line carrying so much of the load. He still believes in the younger players the Bruins are asking to pick up most of the secondary scoring, but the Bruins aren’t going to wait all season for them to start getting on the score sheet more often.

“But we recognize we don’t want to sit around, wait too long, for something that may or may not happen,” Neely told WEEI.com in a brief chat after the Bruins and the City of Boston opened the Willie O’Ree Community Rink at Smith Playground in Allston.

So far the trio of Jake DeBrusk, Danton Heinen and Anders Bjork, who are all in their second NHL season, have combined for four goals (DeBrusk three, Bjork one, Heinen none). A fourth forward, rookie Ryan Donato, was assigned to Providence (AHL) on Thursday after scoring just one goal in 11 games.

Here’s what Neely had to say about each of the young forwards:

On Bjork: “Anders, I think he’s in a little different category because of coming back off the [shoulder] injury. Overall I haven’t been overly disappointed with his game so far. I mean you’d like to see a little bit more offense from him but I think he’s trying to get his confidence, trying to get the feel back.”

On DeBrusk: “Jake, I feel like he’s had a lot of really good chances, he just hasn’t buried as many, and I feel like it’s going to come.

On Heinen: “Danton’s struggled a little bit, and then confidence goes, right?”

On Donato: “Even Ryan, he’s a guy that he had success when he first came in and maybe sometimes you feel it’s going to be just as easy coming back. And people get a little flavor of who you are and what type of player you are on the opposite side, so again more of the growing and learning experience.”

Neely said all four above-mentioned players have improvements to make in the defensive end. But he’d also like to see a little more creativity for them inside the offensive blue line, even if that means now and then that means taking a chance that could turn into a mistake.

The Bruins might be in a different position had they won the sweepstakes over the summer for unrestricted free agents Ilya Kovalchuk or John Tavares. Neely, though, wasn’t sure all the Bruins problems would’ve been solved because to add those players others would have been moved out

Of course, the Bruins didn’t do anything to improve their secondary scoring once they missed out on the big-ticket items. Chris Wagner and Joakim Nordstrom have been solid bottom-six pickups, but no one came in to replace either Rick or even Riley Nash.

“Obviously you could look back and say maybe we should’ve done something different, but if you get those guys then you’ve got other issues you have to try to work out,” Neely said. “But I think that we all recognize where we’re at and from the players’ perspective, they recognize it and we certainly recognize it.”

Now it’s up to the team as currently constituted to turn that recognition into production, or there could be changes.