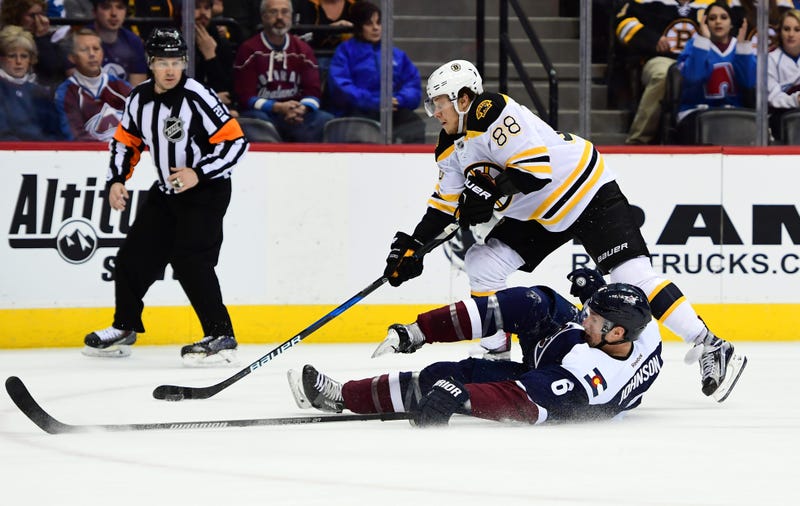 Get your popcorn popped.

Arguably the best two forward lines in hockey are set to meet Wednesday, when the Bruins visit the Colorado Avalanche.

In this corner: Brad Marchand, Patrice Bergeron and David Pastrnak, the Bruins first line that has combined for 68 points. In the opposite corner: the Avalanche line of Mikko Rantanen, Nathan MacKinnon and Gabriel Landeskog, which has combined for 69 points.

“Yeah, it’s definitely going to be a good matchup. I’m actually excited [to face] them,” Pastrnak, who leads the NHL with 16 goals and was the NHL’s First Star last week, recently told WEEI.com.

Rantanen woke up Tuesday leading the league with 26 points (six goals, 20 assists), one point ahead of Bergeron (nine goals 16 assists) and two points ahead of MacKinnon (11 goals, 13 assists). Pastrnak has seven assists to go with his goal total and ranks fourth with 23 points.

Marchand has 20 points (six goals, 14 assists) and Landeskog has 19 points (11 goals, eight assists), making this season the first time since 2005-06 and the second time since 1996-97 that two lines have started the NHL season by getting at least 68 points in their first 17 games.

Although there are folks in Buffalo, Winnipeg and Tampa that might try to make an argument their top lines belong in this argument, scouts and front-office types informally polled last week almost unanimously agreed the Bruins and Avs’ top lines are the best two right now.

Landeskog was recently asked by the Avs’ in-arena interviewer after a Colorado win if his line is the best in hockey. “Yes,” he replied.

An effort to get Landeskog’s Bruins counterparts to trash talk back went nowhere.

“They’re pretty good, they’re very good right now,” Marchand said. “You know you can’t discredit them with what they’ve done. The last time I looked Rantanen was leading the league. And I skate with MacKinnon in the summertime and that kid is unbelievable. So I was not surprised that they put a couple good players with him, that they’re going to light it up. They’re fun to watch, that’s for sure.”

When comparing the two lines a couple experts wondered about the sustainability the Colorado line’s production, especially in a lineup with less depth than Boston. The Bruins’ line has a longer track record of lighting up the league.

And one scary thought for the NHL: Marchand and Pastrnak think the Bruins’ line can actually get better.

“We still haven’t played our best, we can be better, hopefully we can match the top line and play as good as those guys,” Marchand said.

Pastrnak added: “Exactly. That’s the thing, you know we still keep producing but we don’t feel good about our games, so we’ll see what’s going to happen.”

The Bruins’ top line will get its best measure of how well it’s playing Wednesday in Denver.