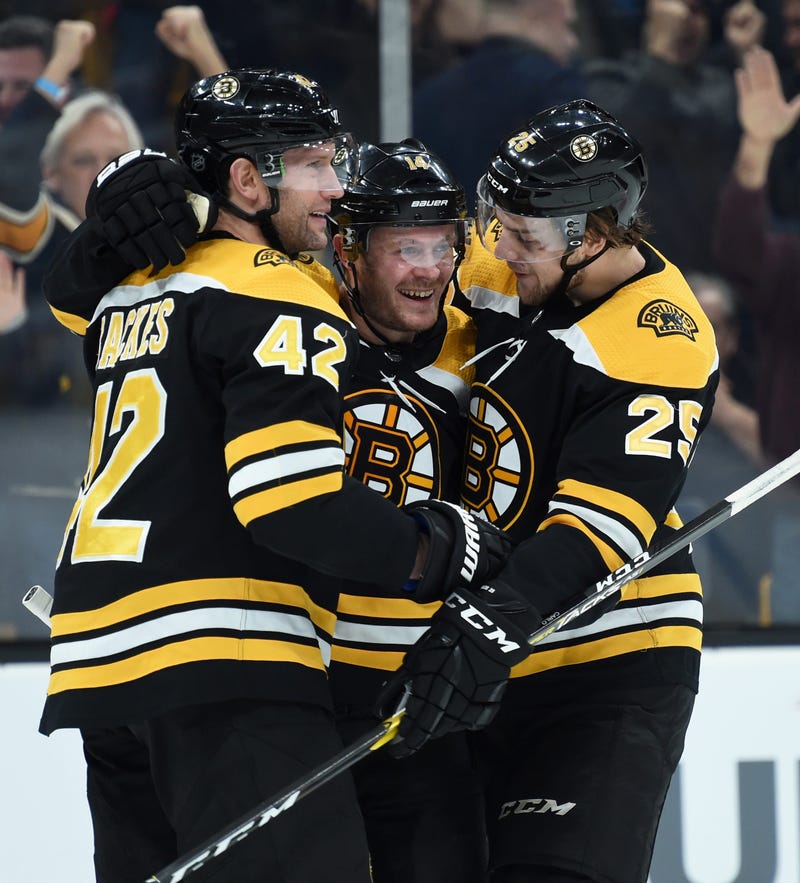 Over the past couple years many Bruins players have found they have more in common than hockey.

More than half the Bruins’ roster has attended the team’s chapel, and it has helped each player keep in touch with his faith, handle the pressures of being a NHL player and forge camaraderie with his teammates.

“Keeping an even keel through [your faith], but sharing struggles, being vulnerable together, knowing that we’re there to support each other, it translates into having a deeper connection on the ice, at the rink, checking in on guys further than just your stat line,” forward David Backes told WEEI.com. “

“It’s ‘how’s your family, how are you doing, it doesn’t look like you’re having a great day, anything I can do for you.’ And those things go a long way toward team building, unity and the chapel’s been huge for that.”
Courtesy Dave Ripper
Pictured: (clockwise) Torey Krug, David Backes, Chris Wagner, Danton Heinen, Charlie McAvoy, Ryan Donato, Anders Bjork, Brandon Carlo, Dave Ripper, Kevan Miller.

The Bruins’ chapel started a few years ago when defenseman Adam McQuaid, who has since been traded to the New York Rangers, got together with Dave Ripper, a pastor at Grace Chapel in Lexington. What started as just a few guys brought together by their faith grew to include more than a dozen players during any given meeting, possibly the largest chapel in the NHL.

Ripper had no prior experience with a chapel with professional athletes and recently admitted he was “intimidated” at first. It didn’t take long for him to get comfortable with the Bruins.

“I think a lot of the struggles and challenges that hockey players have are universal,” Ripper said. “So I think there are probably five big areas we talk about that I think these guys struggle with and that any human being really struggles with.”

First is identity and not basing it just on on-ice accomplishments. Then there’s purpose and making sure to do things to make the world better, like all the work the Bruins do with kids out in the community.

Security is important because of the fragility of each player’s career, so Ripper tries to get the players to lean on their faith when they’re feeling insecure. Community plays a large role, especially with players even competing within a team for playing time and jobs. Ripper emphasizes that “we can be brothers, we can be friends, we can have solidarity with one another.”

Last is an “ultimate sense of peace.” Players are constantly striving for the next thing, whether it’s the next contract, or a bigger role or a championship. That can be a grind.

“So if you’re not content now and grateful for what you have at this moment, you’re not going to be when you get that thing that you think is going to make you ultimately happy,” Ripper said.

The Bruins’ chapel meets once every one or two weeks on average, usually for breakfast or lunch before or after practice. Ripper serves as a sort of coach for players to better fit their faith into their careers and to understand why they do certain things while worshipping.

“I never did Bible study, I still I read the Bible and I scratch my head sometimes,” defenseman Kevan Miller said. “So [Ripper] puts things into perspective and he kind of goes through different passages and what this means and how it’s relative to us and how it can go along with our lives. And so I think he kind of directs things in that sense and kind of drives the conversation a little bit.”

Third-year defenseman Brandon Carlo, who has learned through the chapel how better to integrate his faith into his career, believes what he’s learned in chapel has helped his development on the ice.

“I think it gives me a little bit more confidence on the ice, I guess you can say, knowing that I’ve been saying throughout the game that ‘He is with me,’” Carlo said. “I write it on my stick too. So with that it’s just a little bit of a reminder that there’s a greater picture, I guess you could say. So a little bit more relaxed. And there are those mistakes that you make and I feel like that’s helped me just kind of get passed them a little bit faster. So yeah, I’ve really enjoyed opening that chapter of my life and want to continue with it.”

The Bruins chapel participants are part of a group text chain that keeps the conversation going. Ripper will use it sometimes to send a prayer to the players before or after a game. As much as the chapel has helped the Bruins become better players, it’s aided their off-ice lives and in turn made them closer as a group.

“You’re sharing things that you otherwise wouldn’t share,” Miller said. “When you go out to dinner you’re not talking about these things. So we get into the scripture a little bit, we talk about our faith and family and how things are going and I think it breeds a tighter group.”