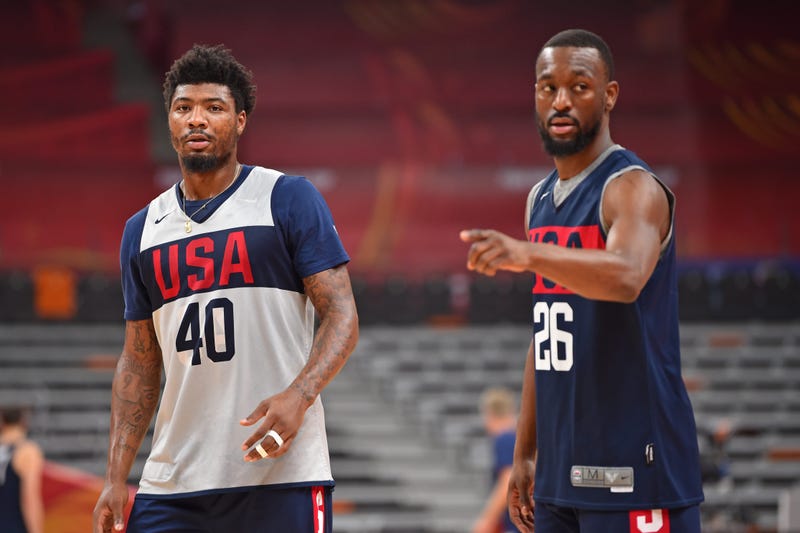 On the whole, the trip to China was a disappointment for everyone on Team USA. That’s not to say the chemistry was bad between certain guys or anything of the sort. Players made sure to squash that on social media.

The fact of the matter is they lost. Team USA isn’t supposed to lose, as much as the rest of the world is collectively getting much better at basketball.

And it’s not exactly a great look for the Celtics when four of their players were a part of the group which allowed USA Basketball’s 58-game winning streak to snap. The loss to France does not solely fall on them. In fact, aside from his four missed free throws, Marcus Smart played well in the big loss, so did Jaylen Brown.

Here’s a look at some of the goods and bads from all four members of Team Shamrock:

Until the quarterfinals, Walker was Team USA’s most consistent offensively player. He wasn’t necessarily the highest scorer each night, but he was efficient and always among the few in double figures.

Opposing teams clearly placed an emphasis on stopping him and failed to do so — until the quarterfinals. That’s the main issue with Walker from the tournament. When the light shined brightest, he couldn’t step up.

Not only that, Donovan Mitchell was the one who did step up and gave the U.S. the lead by the end of the third quarter. But in the fourth, it felt like he wasn’t out there. Meanwhile, Walker was trying to carry the baton.

Walker was better in the fourth against France, but not good enough. Elite players don’t give up, and the new Celtics point guard didn’t. But given what Mitchell had done to that point, the emphasis should have been to ride the hot hand. It’s Walker’s job to make sure Mitchell is getting the ball in a spot to score and an adequate amount of touches.

Defensively, Walker was better than expected, though he’s still limited.

After seeing him take quite a few charges in the tournament, you have to wonder if Walker’s been receiving pointers from Smart — who keeps talking about how he’s impressed with the new Celtics guard’s defense.

The C’s point guard has some quick hands, too. Although FIBA refs allow for more physicality, the one thing they’re quick to call guys for is reaching.

The fact Tatum’s injury didn’t turn into something more is the biggest win of all. Also, he didn’t give up — at least not publicly — and stayed with the team.

On the floor, he was as aggressive as anyone. His shot selection was good in the games he did play. With regard to his mid-range game specifically, rather than take ones from just inside the three-point line, Tatum was pulling up from 15-feet and in.

For the most part, he got to the rim at will. But he also struggled to finish. It may be something Tatum can address at Celtics camp.

Tatum has already taken a step forward, and if his touch around the rim improves, the rest of the NBA will be in for quite a surprise when they play Boston

Defensively, Tatum had a few big-time blocks. However, a few of those came after his man got by him. Sure this means Tatum is recovering well. But how will that translate against the NBA’s top players?

Jayson Tatum gets fancy on the finish. --(via @NBATV) pic.twitter.com/XpB1igXPDy

Brown was the most up-and-down of the four Celtics on the offensive end. He was efficient against Greece, Brazil and France, but was nowhere to be found against Turkey, and had a rough night against Serbia.

During his rough start last season, his shot selection was a big problem. Once he cleaned that up, Brown turned into the player he was expected to be after an impressive 2018-17. In this tournament, he showed similar discretion to the second half of 2018-19.

But the problem on offense remains his inconsistency from night-to-night. Can’t have that from a guy you’re relying on.

Defensively, Brown was the only guy who could hang with France’s Rudy Gobert. He also helped Smart handle Giannis Antetokounpo in the win over Greece. His defense in this tournament was some of the best he’s produced since the Celtics drafted him.

Much like Tatum, Smart walking away from this thing in one piece is huge. Calf tightness. Strained quad. Then there was something with one of his knuckles (which turned out to be nothing much). What was next?

Smart didn’t take those “Oh no!” threes for Team USA. He found the open man or made the pass which led to the assist.

Now, he also did a great job of creating contact and drawing fouls against France. Team USA needed that. But, as everyone well knows by now, he went 4-for-8 from the line. There’s not a ton of value in being able to draw fouls and not fully capitalize on them.

Defensively, Smart did what he always does. Outside of the way he bodied up Antetokounmpo in the second round, the NBA All-Defensive guard was his normal, scrappy self.

Just watch Marcus Smart work on Giannis and then fly into a closeout. Great stuff. pic.twitter.com/4Vqe6NlP5h