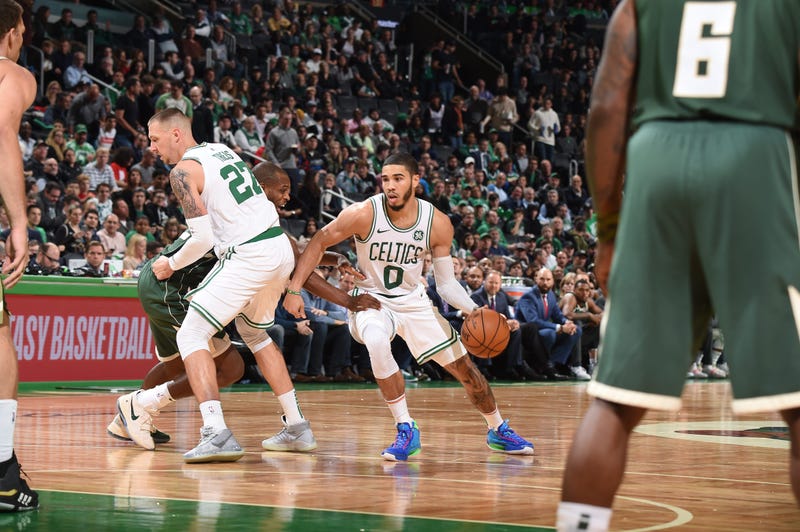 The Celtics were bad in the first half against the Bucks. They’ve only played four games, but the C’s haven’t exactly made a habit of starting games on the right foot. And with Jaylen Brown (illness) out, it looked like the Bucks were going to cruise to a win — especially with Khris Middleton playing like he’s a five-time All-NBA First Team selection every time he sets foot in the Garden.

But, once again, Boston looked like a completely different team in the second half, and it made all the difference in the 116-105 win. (For a complete recap of the Celtics' win, click here.)

Now, Kemba Walker played a big role in the comeback, particularly with his 11 second-half free throws. He didn’t shoot great from the floor in the first half (37.5%), but he was one make away from shooting well. It’s not as if he shot 20% — like Jayson Tatum did. Also, Walker went 2-for-5 from three. Tatum missed each of his first three attempts.

There are goods and bads to this.

A slow start won’t deter Tatum from shooting, and he’s clearly capable of working through his struggles. When the game is on the line and the Celtics need someone to step forward, he’s more than capable of doing so, both mentally and physically.

However, the Celtics are falling into these holes in part because of Tatum’s poor first-half shooting, whether it be inside the arc or outside of it. If there’s a night he can’t work through a slow start, the Celtics are going to be in trouble.

There’s the matter of “what if this happens against a better team?” Yeah, there are some teams who are better than the Bucks, but let’s not act they’re scrubs. This is a quality win over a quality team.

But Tatum needs to get things going sooner. With every miss in the lane, it looks like he’s more worried about drawing contact than making the shot. By the second half, when he realizes he’s still not getting some of the calls he should, Tatum becomes a different player — one that’s very difficult to contain.

“It was really good to see him get going,” Gordon Hayward said about Tatum. “Good to see him bounce back, it’s a sign of a mature player, to be able to have a tough first half but then bounce back in the second. He did that and hit some huge shots down the stretch.

And Tatum is not alone in this.

Hayward isn’t aggressive enough in the first half, that’s his problem. He’s taken the same amount of shots in each half (27), but like Walker was in his first few games, Hayward appears to be more worried about getting everyone else involved. That’s one of his strengths, but when he gets too caught up in facilitating first, he’s not helping anyone. Because he’s ignoring his own opportunities to score.

What more proof does Hayward need than the numbers he, Tatum and Walker put up in the second half? They all do well then, and they all shoot often.

This win had an Isaiah Thomas’ Celtics feel to it. That’s a great sign for this team. They won’t get burned by adopting that mental approach. But if this group goes about its business like that group of Celtics did, this team should be a force for four quarters. They have more than enough offensive talent for that to be the case.

“We just need to keep working as a team,” Brad Stevens said. “Figure out where our best opportunities are, that’s two games in a row that, that’s happened. But, you know, there (are) always trends like this whenever you’re going through a season with 82 games. The goal is to play better (for) more possessions.