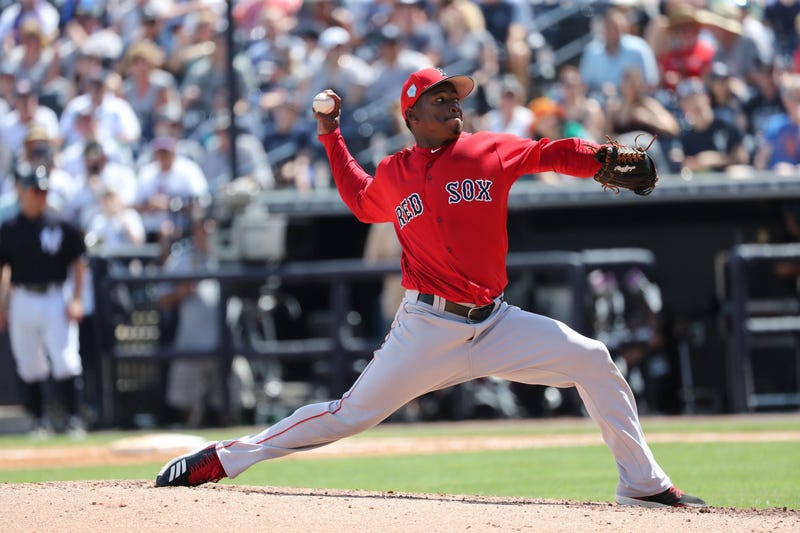 When Jenrry Mejia received his third suspension from Major League Baseball back in 2016, it was supposed to be his last one. He tested positive for a performance-enhancing substance for the third time, which meant a lifetime ban was in order. Mejia’s future in MLB didn’t seem like a topic of debate.

Despite this, the once-promising reliever held out hope for another shot and kept throwing in the Dominican Republic.

“I was thinking about it because I never thought I (wouldn’t) come back, so I was working,” Mejia told WEEI.com. “I would keep working hard because I would keep in touch with my agents.”

It turned out Mejia was right to keep training. Although he’d held out hope throughout his ban-turned-suspension, Mejia’s reinstatement in 2018 came as a shock to him, much like everyone else.

“Yeah, I was surprised and I was so happy, too,” he said.

As soon as Mejia received news from the league, he found out the Mets had released him. Here he was, a free agent reliever that hadn’t pitched in a big league game since 2015. Along with the layoff, his checkered past didn’t help his appeal. Could he pitch like he has in the past without using performance-enhancing substances? If he did pick up where he left off, how could a team trust he wasn’t using again? He didn’t appear to be a worthwhile risk.

Those factors didn’t stop the Red Sox from taking a flier. So far, the right-hander has shown promise. Through 5 1/3 innings, Mejia has five strikeouts and is yet to walk a hitter, though he has hit a batter. Each of his four appearances has been a save opportunity, three of which he has converted. Furthermore, Mejia says his fastball is right where it was before the ban, sitting 93-94 miles per hour.

Now, when it comes to the Red Sox, results are all that matter. For Mejia, it’s a shot at redemption after hitting rock-bottom, where so many “friends” deserted him.

“I learned a lot about friends,” he said. “When you (are) up, you have a lot of friends. They need something, they come to you. But when you (are) down, nobody goes, ‘Hey man, you are my friend,’ or gives me a hug or something. Nobody would be around. I (started) to think about it, put my money in the bank, always thinking about my family. When you think about friends, you’re not going to have many friends. When you (are) on top (you will), but when you’re down you don’t have many friends.”

Having said that, Mejia feels he has found friends within the Red Sox organization. He even received an invite to Dustin Pedroia’s house with the rest of the big league club back in spring training. Mejia said he got along with everyone — even Chris Sale and Rick Porcello, who’ve been outspoken about the use of PEDs within the game.

“They treat me like (I’m) the same,” Mejia said. “They don’t ask me about anything, they don’t treat me like I’m different. They treat me like a brother, like family again. Nobody (has) come right in my face and ask me, ‘What happened? Why (did) you do that?’ When I’m here, it’s comfortable.”

Mejia has his second chance. Both the Red Sox organization and its players have given him that. He’d do well not to squander it.