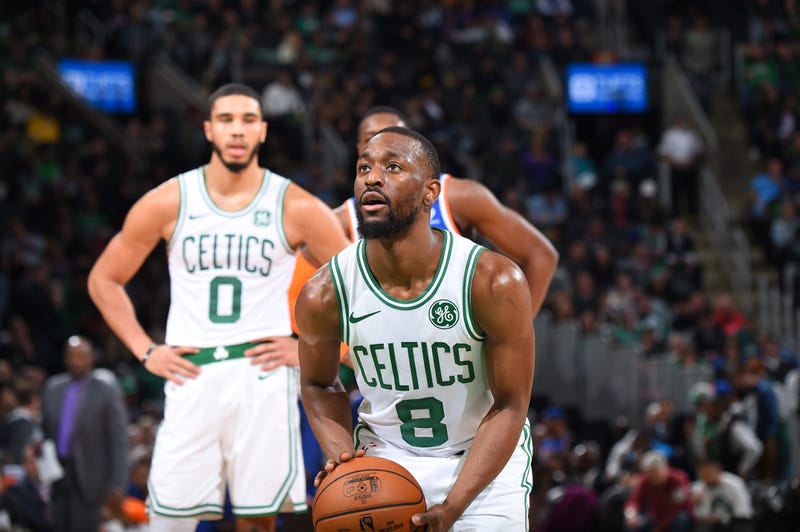 Jayson Tatum may have been the hero at the end of the night, but the Celtics wouldn’t have had a chance to win Friday’s game if not for Kemba Walker. Not only did he earn 14 free throws in the 104-102 win over the Knicks, he made every single one. (For a complete recap of the Celtics' win, click here.)

Walker misses one of those free throws and the Celtics’ attempt at the game-winning shot has a much different vibe — because they wouldn’t have been in the driver’s seat going into that possession.

TATUM TAKES IT... MAKES IT!!! pic.twitter.com/e0xzbtRjnP

Not once did a single Celtic take 14 free throws in a game last season. In total, there were nine instances where a Celtics player made it to the line 10 to 13 times in a game. Gordon Hayward did it twice, Tatum three times and Kyrie Irving four.

Walker has already done it twice, in back-to-back games. He went 14-for-15 from the line in the win over Milwaukee.

“His ability to get to the line, you see when he draws contact, he draws contact,” Brad Stevens said after Friday’s win. “I mean, the one time when (Marcus) Morris jumped up, Morris leveled him. It was a good, hard foul, and Kemba got right up and knocked in the free throws. I mean, he’s a tough guy. I said this yesterday: he takes hits, he makes fouls shots, he’s available every day — and he got two or three of the biggest rebounds of the night for us.”

Having someone who can draw fouls at will is something the Celtics have not had. Irving was too good at avoiding contact, and Tatum still isn’t getting the calls in the paint.

Now, Walker won’t be perfect every night like he was against the Knicks, with his performance against the Bucks being evidence — even though it was near perfect. But this means the Celtics have someone who can earn a trip to the line in an instant to help get the offense under control when things are chaotic. Someone who can drive and get opponents in foul trouble.

“He’s so good at getting by his man, kind of getting into the body. He’s just so quick,” Hayward said. “Over the years, (he) developed that veteran-savvy ability to find their body and get the foul.”

Tatum may be called upon to take the game-winners more often because of his size and his consistency from three (48.5%), but Walker is going to be the one who helps put the Celtics in position to take that shot.