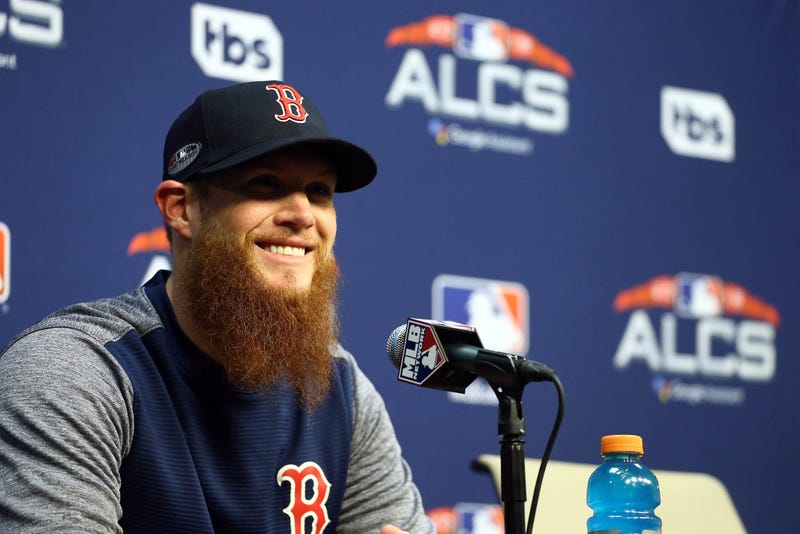 HOUSTON -- Just as the media was starting to filter out what had been a jubilant Red Sox' clubhouse following a Game 4 win over the Astros, Craig Kimbrel walked down the long hallway to the manager's office to talk to Alex Cora.

Kimbrel had barely hung on to finish off his two-inning stint, having to rely on a diving catch from Andrew Benintendi to take away what would have surely been a game-winning hit off the bat of Alex Bregman. One more batter and the closer would have been out of the game. But Cora had resisted the urge to pull the plug on the struggling pitcher, riding the righty until the final awkward out.

It wasn't lost on Kimbrel.

"I went to him last night and said, ‘Thank you for trusting me and letting me get out of that inning last night.’ He looked at me and said, ‘You’re my guy and we’re going to give you the ball.’ I came in today, got ready to pitch the ninth inning and the ball got to me," he said after earning the save in the Red Sox' Game 5 win, closing out the American League Championship Series against the Astros.

"You don’t ever want to have doubt. There’s been a lot of doubt going around through the season, through the postseason about everyone else but me. I come in the postseason, give up some runs, have some tight innings and there is a lot of talks about that. For him to stick with me, tell me he’s confident in me and say I was his guy, it was great."

The pep talk was one thing. Fixing what ailed Kimbrel was another.

That's when the reliever turned to his pitching coach.

"I had a clear message to him," said Dana LeVangie. "I heard he wanted to spend the night here watching video and I said, ‘Nope, it’s not going to happen. We’ll talk about it tomorrow.’ It was small little things so we would fix it, and we did."

The two arrived back over at Minute Maid Park just before noon, immediately getting together to tackle the pair of mechanical issues LeVangie had identified. Regarding the fixes, the pitching coach explained, "It was pretty simple to find. It’s important the guys want to talk about it and understand it. Small little things. Very small things."

Perhaps they were small things, but they were also of huge importance.

"We found a few things last night after the game. Some stuff I’ve been struggling with for a while," Kimbrel said. "I feel like I was able to hone it in tonight, get back online and pitch like I’m supposed to."

While it still wasn't perfect Thursday night, the image offered by Kimbrel was a lot closer to what the Red Sox will need. He did walk a batter, but struck out a pair in holding on to the Red Sox' three-run lead. The step in the right direction for the pitcher just so happened also pushed his team into the World Series.

"I wouldn’t say my confidence was (shaken). I was getting a little frustrated at myself, mad at myself just because I couldn’t get out of some things I’ve been working on," Kimbrel said. "I was able to put it all together tonight."