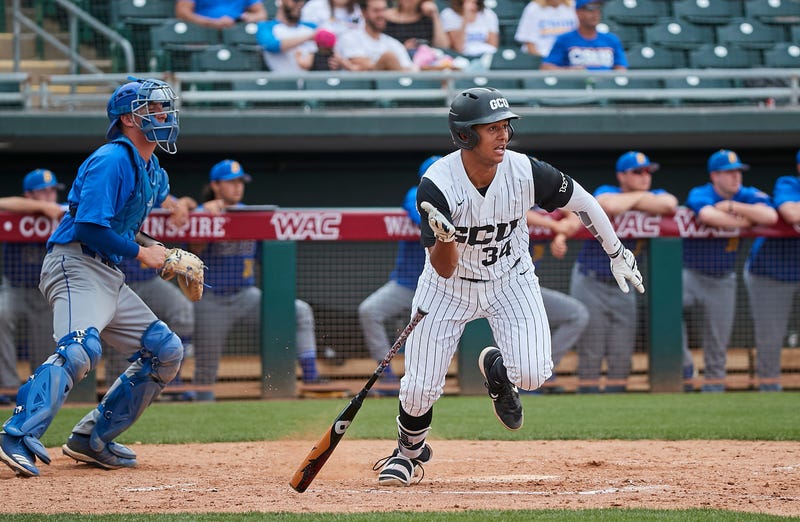 Vaughn Williams has always been at the ready.

Growing up in a military family, Williams made the unorthodox transition from minor league baseball player to a 20-year career in the Marine Corps before landing back in pro ball as a scout with the Red Sox. Discipline. Preparedness. Execution. It had all been part of his plans. So when 9 a.m. last Sunday rolled around he was ready to go.

It was at this exact moment -- not a minute before -- that Major League Baseball teams were allowed to make offers to Draft-eligible players who had gone undrafted. For Williams, his phone had been cued up to a Colorado area code phone number belonging to John Cuba Bess Jr.

"I knew other teams were doing the same thing and they were standing by so it was going to come down to who got in there first. I wanted to be there when the clock started. We’re always competing against other teams, so I was ready to roll," Williams said in a phone conversation Saturday night. "I did 20 years in the Marine Corps and it was like 'Mission Accomplished.' You have to be ready to go when the first round goes downrange. I was ready, I’m not going to lie."

"Unfortunately I didn’t get taken in those five rounds (in the MLB Draft)," Bess told WEEI.com. "It was Vaughn who called me (Sunday). It was right at 9 a.m."

How ready were the Red Sox to make Bess a priority? Not only was the first baseman from Grand Canyon University getting an offer he was also receiving a recruiting video sent along from Xander Bogaerts.

"I hit him with that first thing at 9 in the morning," Williams said with a chuckle. "I came in barrels blazing."

It worked. The next day Bess called the Red Sox scout and told him he was bypassing the chance to continue his career at Grand Canyon in order to sign for what had become the MLB-mandated maximum signing bonus of $20,000.

This clearly wasn't an easy decision for the power-hitting first baseman.

The belief was that he had slipped out of the Draft because of injury-related speed bumps during his collegiate career. First, it was a knee that sidelined Bess for his sophomore season, and then after a breakout campaign in 2019 -- leading GCU with a .341 batting average and 11 home runs -- he managed just nine at-bats in the shortened 2020 season due to a hamstring issue. There was some thought that more could be accomplished at a place that Bess seemed tremendously loyal to.

Some of you know already, but I’ve decided to sign free agent with the Boston Red Sox! I can’t thank everyone at GCU that has impacted me over these four years. This is the best decision for my career. A thanks to the Red Sox and I can’t wait to get started!

"I knew that was one of the major factors for him, wanting to get back and play," said Williams of the player's love for his team and manager, former big leaguer Andy Stankiewicz. "He had somewhat given Stankewicz his word. When he didn’t commit until the following day I knew that was it. It wasn’t that the didn’t want to play. It just came down to that commitment to that coach. I commend him for that. But I was like, ‘Hey man, you’ve got me sitting on needles over here.’ … When I answered the phone you could tell his mind was made up. He was good to go."

In Williams' mind, this was a huge win.

The scout had an idea from the first time he saw him at that Area Code tryout in Colorado in 2016 this kid was unique, in so many ways.

Start with the name.

Bess might get an occasional "JB" or "Johny Jr." but those are rare. He is "Cuba" to most. ("Most people don't know my real first name," he said.) This, of course, leads to all kinds of questions. The first? "Every time I meet someone new they ask me if I’m from Cuba," he said. Nope. Bess was given his middle name because of his father's admiration for the actor Cuba Gooding Jr. after watching his work in the movie Boyz n the Hood.

"One of these days it would be pretty cool to meet him," Bess said of his namesake. "Every time people ask me, ‘How do you spell that?’ I just say it’s like the country because not a lot of people know who Cuba Gooding Jr. is these days."

Now it's about making a name for himself, a realty Williams firmly believes is on the horizon.

Getting a read on Bess might have been a challenge for some considering his .492 batting average aa Fruita Monument High not only came in the thin air of Colorado but was managed in an area not exactly known to be a breeding ground for big leaguers, sitting in the cold three hours south of Denver. No matter. Williams was sold from the get-go and only became more intrigued by the lefty hitter as time went by.

"There has never been a doubt in mind as far as his ability with the bat," the Sox evaluator said. "It’s all about how everything lines up. The only thing that was holding him back in my opinion with the Draft was because he only had this one year, one full season because he had been hurt. But I had that history with him for so long I had pushed that away. Injuries are part of the game, it’s going to happen.

"That’s another thing that made me really, really cling onto this kid, because of his ability to handle the adversity of not playing, having to redshirt and watch his team. Everybody I talked to said this kid never stopped working, never stopped being part of the team. Even when I watched him, even though I knew he wasn’t going to get in the game, he was into the game. You see some kids who will be down there sitting at the end of the dugout while the game is going on and they are in their own world. But I was like, ‘This kid is a gamer.’ And it just built over the years."

With Williams' recommendations leading the way, Bess became a priority for the Red Sox.

On a Zoom call with Vice President of Amateur Scouting Mike Rikard, Red Sox assistant hitting coach Peter Fatse, and Spencer Bingol from the analytics dept. all involved, it was time to sell the organization on the player instead of the other way around.

"During that Zoom, they didn’t really ask me a whole bunch of questions," Bess remembered. "It was more of them presenting to me what the organization is about. The kind of technology they use to break down your swing mechanics, you’re throwing mechanics. Things about their medical staff, their nutritional staff, and how they take care of your body. There wasn’t a whole lot of question and answer, but more just what the Red Sox are about how they go about their business."

"That was the icing on the cake," said Williams of the call. "That helped a lot."

Cuba. The name and player that Red Sox fans might want to start remembering.

"These are the kind of stories movies are made out of," the scout confidently said, "and I think we might have a good script here."