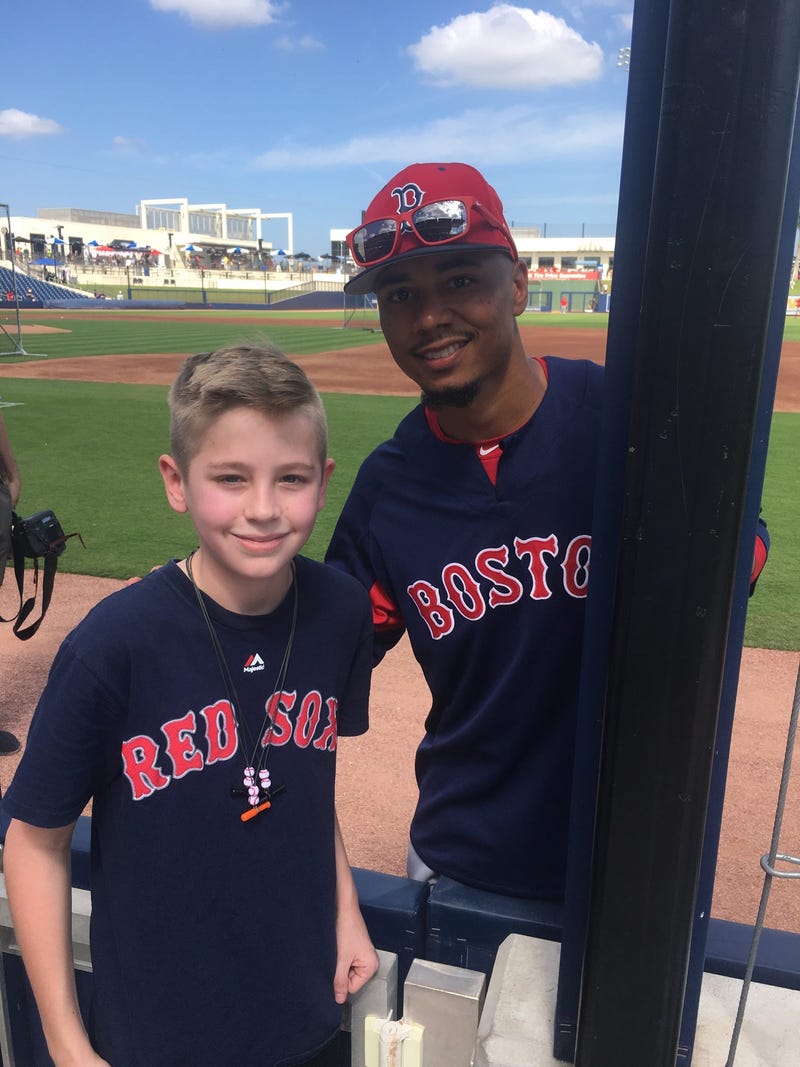 ARLINGTON, Texas -- The curiousity grew with every day the necklace brought more and more good fortune.

At first, Mookie Betts didn't think much of the plastic ball and bat he had hung from his neck ever since being given the item by a youngster at spring training. But as the season unfolded, with the Red Sox' outfielder turning in an epic run throughout the season's first month, the presence of the necklace seemed more and more notable.

Betts wanted to give a thank you to the source of the makeshift jewlery, which he could be seen with at all times, both on and off the field.

After the search gained steam during Friday's NESN broadcast, the young man who handed the Sox star the necklace back on March 1 was identifed. His name is Griffin Cantrell, a 12-year-old Betts fan from Paducah, Kentucky who simply wanted to give his baseball-playing hero something out of appreciation.

"Griffin took that necklace specifically for Mookie," said the young fan's father, Matt Cantrell, via a phone interview. "He thought we were going to have a chance to meet him and if he met him he wanted to give him something. Because everybody asks for different things from players, but he thought it would be cool if he could give him something for taking time out to stop."

Griffin and his father were familiar with two of Betts' cousins, which led to a conversation with Diana Benedict, Mookie's mom. Matt explained that they were headed to West Palm Beach, Fla. to check out the Red Sox' game against the Astros and would love to meet the outfielder. But Benedict couldn't make any promises, knowing that her son might not even make the trip across the state for that parrticular game.

Still, the Cantrells were hopeful, going so far as to contact an acquintance from Arkansas who had made a few necklaces for his daugher, a softball player. Their idea was to purchase some similar accessories, with a baseball theme, in order to have Griffin hand them over to Betts if the opportunity arose.

Fortunately for all involved, Betts made the trip, and the Cantrells got their chance.

"We yelled over to him and he said, ‘Yeah, come on down.’ My son gave him a necklace and he autographed a ball," Matt recalled. "It was really cool."

Time passed and the Cantrells were content in knowing Griffin had met Mookie, while getting an autographed baseball and photo posing with the player. But then it was brought to their attention that Betts hadn't taken the necklace off.

"Randomly you could see it in different photos and during the ballgame," Matt said.

Then, finally, Betts' cousins were alerted that Mookie's search should be over. Word was passed along that Griffin Cantrell was his guy.