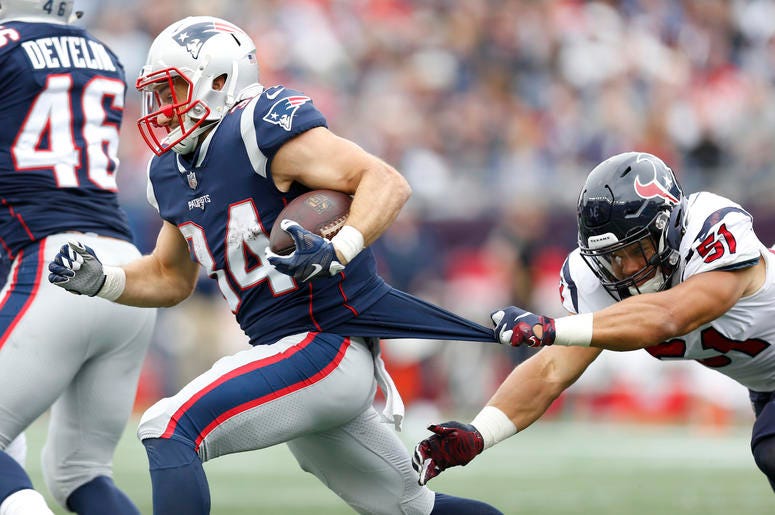 FOXBORO — The Patriots’ current running back situation is a disaster.

Going into Week 4’s game against the Dolphins, the Patriots have James White, Sony Michel and Kenjon Barner on the active roster.

This comes after releasing Mike Gillislee and Brandon Bolden on cut-down weekend, Jeremy Hill suffering a torn ACL in Week 1 and then Rex Burkhead being placed on injured reserve following suffering a neck injury in Sunday’s loss to the Lions.

While injuries are hard to predict, the Patriots could have handled things differently at a number of points this season.

First off, the team only kept four running backs out of training camp in Burkhead, White, Michel and Hill, but there were injury concerns with three of the four. Burkhead is one of the most injury prone players to come through Foxboro in recent years, Michel wasn’t even ready to play in Week 1 following a summer knee injury along with concerns from his time at Georgia, and then Hill was coming off season-ending ankle surgery with the Bengals last year.

Keeping four running backs isn’t out of the norm, as they did in 2017, but Bolden was immediately brought back, so technically they started with five. Also, the backs on the roster didn't have much injury concerns. Also, Bolden was kept off the initial roster last year to get a player (Shea McClellin) on injured reserve but able to return during the year since those players need to be on the initial roster in order to do so. This year, the Patriots didn’t have any players on the original roster moved to IR right away.

Bolden or Gillislee would be nice to have right about now.

Then came Hill’s ACL injury in Week 1, and the team didn’t really replace him. At 6-foot-2, 235 pounds, he was the biggest back on the roster and with him out of the picture the team continues to lack a “big” back. While there weren’t many big names available considering the timing of the injury, the organization still could have brought in a back like Orleans Darkwa, or another veteran back still floating around, to help fill the void.

A lot of stock was placed on Burkhead this season not only to produce, but stay healthy. That was a huge risk considering his injury history over the course of his six-year NFL career.

Now, the Patriots are left with White, Michel and Barner, who have 227 career NFL carries to their name. It seems unlikely they will be able to go the rest of the year with just these three players and another, or several, moves will need to be made.