Johnny Beecher’s home for this week is the same place he hopes to call home for years to come. Not only are his Michigan Wolverines at TD Garden for the Frozen Four, but as the top seed remaining, they get to take over the Bruins’ dressing room for as long as they’re playing.

His Michigan teammates are well aware of the symbolism for the Bruins’ 2019 first-round pick. They gave him first pick of which stall he wanted in the room and made him pose for some photos. Senior Mike Pastujov told the media on Wednesday that he thinks Beecher should really make himself at home.

That might be exactly what happens. Beecher is now three years out from being drafted. The Bruins would probably prefer to sign him now rather than have him stay at Michigan a fourth year, a course that would at least open up the possibility of Beecher not signing before Aug. 2023 and becoming a free agent.

Whether Beecher is ready for the pros remains to be seen. His offensive production remains well below the level the Bruins would hope to see from a first-round pick, and his 15 points (6 goals, 9 assists) in 33 games this season are actually slightly down from his scoring pace from his first two college seasons. On a team loaded with other first-round picks putting up bigger numbers, Beecher centers the third line.

His Michigan coaches and teammates are far from disappointed with Beecher, though. In fact, they see tremendous value in what he brings to the team. Michigan head coach Mel Pearson credits Beecher’s return from injury -- first a shoulder injury last year that required surgery, then a broken thumb early on this season -- and presence on the third line as a key factor in the team’s second-half surge.

“He’s been a real key for us here as of late,” Pearson said. “…I wouldn’t be overly concerned with the stats. It’s what he brings to our team, and what he brings is speed, physicality, he’s got good size, great on faceoffs. He’s taken more of a defensive role on the penalty kill and done a great job there. But he’s really given us another line that’s dangerous, and added to our depth. His development’s been good.”

Pearson has seen growth from the 21-year-old Beecher off the ice as well.

“He’s continued to grow not only as a player on the ice, but off the ice too,” he said. “He’s matured, and you can see that. Maybe last year I might have to calm him down on the bench a little bit. The other day I found him calming our coaches down a little bit. It’s been a reversal. He’s really grown in so many different areas, and he’s still young. He’s got a lot of good hockey in front of him.”

“We all love him in the locker room,” said senior captain Jimmy Lambert. “He's a pretty infectious guy, he's pretty funny, and he carries that onto the ice. He's a leader. He's going to be successful here in Boston in the future.”

While Beecher may help keep things loose off the ice, Pastujov says he can be deadly serious on it and be an intimidating presence to opponents with his 6-foot-3, 209-pound frame and willingness to use it.

“Johnny brings size, a great attitude, and just being a great guy all the time,” Pastujov said. “It's obvious that he's not having the point streak or goal streak that he wants, but you don't see him pouting about it. He's one of the hardest-working guys in the game. This year I think he’s brought a big, physical aspect to his game. Guys are scared to line up across from him. I think that's going to help him out once he plays in the next level.”

Obviously, those are all positives. The Bruins would still love to see the offense come at some point, but even if it doesn’t, Beecher’s combination of size, speed, physicality and defensive ability could help him carve out a career as a third- or fourth-liner. That’s not the ideal outcome for a first-round pick, but there’s certainly still value in it.

Beecher and the Wolverines take on Denver in the first game of the Frozen Four Thursday at 5 p.m. on ESPN2. If they win, they’ll face the winner of Minnesota vs. Minnesota State on Saturday at 8 p.m. on ESPN. 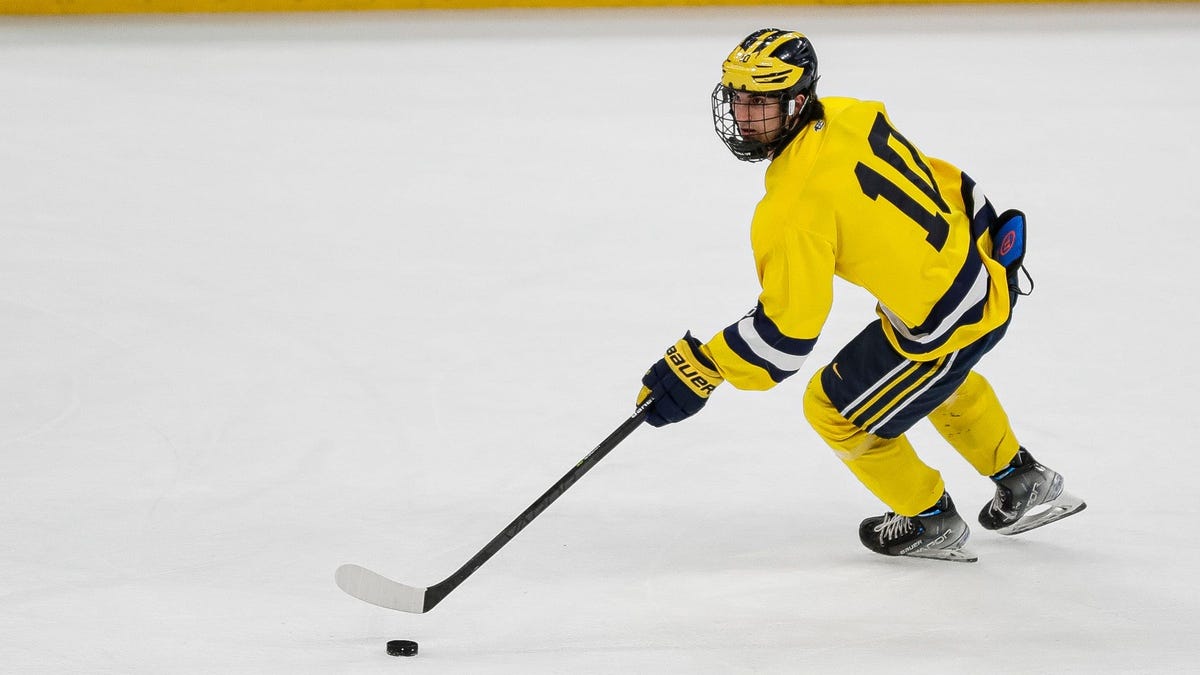