While so many are focused on the Celtics trading for James Harden, there is another name that Danny Ainge should be focused on: Karl-Anthony Towns.

While Harden obviously offers something the Celtics would seem to need when looking to overtake the likes of Miami and Brooklyn in the Eastern Conference -- premier scoring -- Towns actually may be more of an over fit for Brad Stevens' team.

Talking to one of our Celtics experts at WEEI/WEEI.com Tyler Devitte, this is what we came up when putting together a proposal that might land the 25-year-old.

For the Celtics the impetus is obvious, with Towns -- at Top 5 forward in the NBA -- locked up through the 2023-24 season. His position would seem to complement Jayson Tatum better than Brown. Culver, the sixth overall pick in the 2019 NBA Draft, is also a useful piece, currently averaging just more than 10 points per game while shooting 50 percent from the floor in his second year with with the Timberwolves.

Minnesota would obviously be banking on Brown becoming a star in the league, which is a very real possibility. Langford is still considered a valuable piece going forward despite the injury-plagued start to his career, perhaps carrying more upside in the eyes of the Timberwolves than someone like Marcus Smart. Theis is also useful, and that first-round pick is does obviously offer intrigue. But this is about how the Timberwolves (and the Celtics) view Brown.

The Timberwolves are off to a solid 2-1 start, with Malik Beasley, D'Angelo Russell and first-round pick Anthony Edwards all averaging around 16 points per game. But there have been rumblings that Towns wants out.

File under: You never know unless you ask. 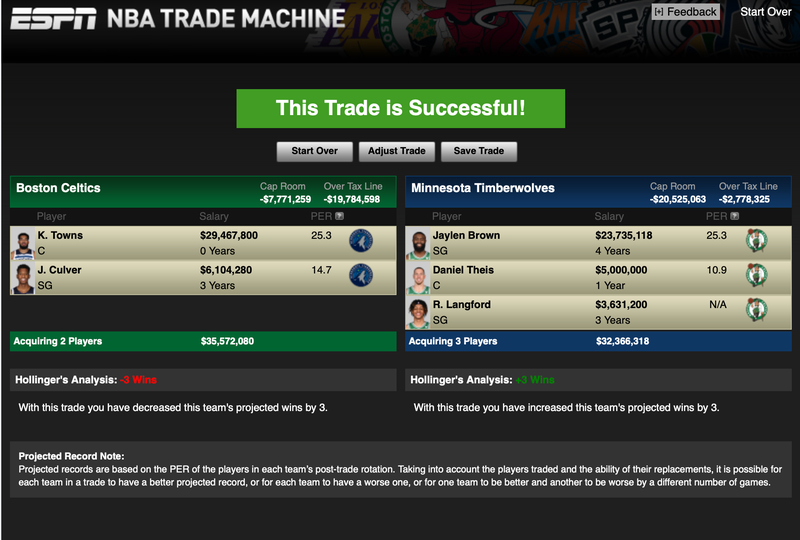