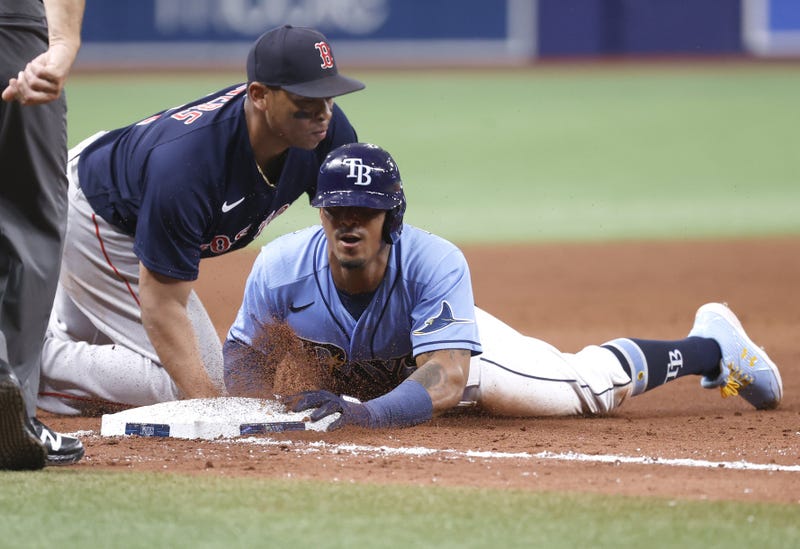 Josh Beckett tells the story of Terry Francona walking out during a midseason round of batting practice and asking the then-Red Sox pitcher if he would be interested in talking contract extension.

The next thing you know, he is putting pen to paper on a three-year, $30 million deal. That ultimately gave the 26-year-old peace of mind, and most likely saved the Red Sox approximately $60 million considering Beckett finished second in the American League Cy Young Award voting in what would have been his contract year (2007).

Remember when the Red Sox offered Josh Beckett a contract extension while his ERA was hovering around 5.00 in early July 2006? Listen to Beckett on latest @Bradfo_Sho: https://t.co/8cvBAGjqQz pic.twitter.com/lBTp9Y7e5n

It was a strategy former Red Sox general manager Theo Epstein made a living on. Dustin Pedroia. Kevin Youkilis. Jon Lester. All inked team-friendly, long-term extensions during the first few years of their big-league careers, allowing for the organization to push off free agent drama while keeping some semblance of financial flexibility.

Tuesday's news of the record-breaking, 10-plus-year extension agreed upon by the Rays and Wander Franco was a reminder of those days.

For a team like Tampa Bay, such deals are its lifeblood. Evan Longoria. Matt Moore. Chris Archer. Brandon Lowe. None come close to the commitment about to be handed over to Franco (who will be eliminating what would be the first five years of free-agent eligibility in exchange for the $200 million-plus payday). But you get the idea.

Identify your foundation players. Offer them the kind of financial security they can only dream of. And then sit back and hope they are who you thought they were.

When it comes to this strategy, the Red Sox seem to be a bit of a slump.

At the tail-end of the 2019 season, a source high up in the Red Sox organization told WEEI.com that extending Rafael Devers was absolutely going to be a priority heading into that offseason. Since then ... Silence.

When Franco's deal was surfaced, it is Devers who most in these parts thought of. For good reason. The third baseman is going to be eligible for free agency after the 2023 season, with the opportunity to truly get a team-friendly deal most likely having come and gone.

Now, it's not as if the Red Sox haven't tried. At this point, it appears Devers is content on banking on himself unless the organization blows him away with the kind of deal that he would be getting in the free agent market. At this point, the seduction of security has thinned out considerably.

With these sort of things, the first step is oftentimes the most important one. Once you start going further down the career path, that free agent light at the end of the tunnel gets brighter and brighter.

Even Mookie Betts, who turned down more than a few contract extensions before the Red Sox decided it simply wasn't going to happen, almost couldn't resist.

"That was a really emotional time because I was like, ‘Mom, we’ve never seen this amount of money.’ She was like, ‘OK, cool. It’s a lot of money. I think we know it’s a lot of money. So let’s focus on the facts. Let’s focus on what is real and we took the emotions out of it.' The first one was definitely the hardest," Betts told WEEI.com when talking about that first contract extension offer by the Red Sox. "At the time we had never seen anything like that."

The Red Sox did manage to save themselves some money when Xander Bogaerts agreed to his six-year, $120 million. As he articulated to WEEI.com in June, his mindset lined up with a player ready to prioritize some contractural security.

"At that time when I signed I knew I had some good years, but they weren't as good as they have been these last couple of years," he said. "I knew I was a good player, but I’ve taken to another level since then. Hey man, you get paid a lot of money you’ve got to show up and earn it."

It was nice for the Red Sox while it lasted.

Now both Bogaerts - who can opt-out of his current deal after the 2022 season - and Devers are ready for their top-of-the-market paydays. Team-friendly deals are no longer part of the equation.

Those were the days. For that reminder, we can thank the Tampa Bay Rays ... again.