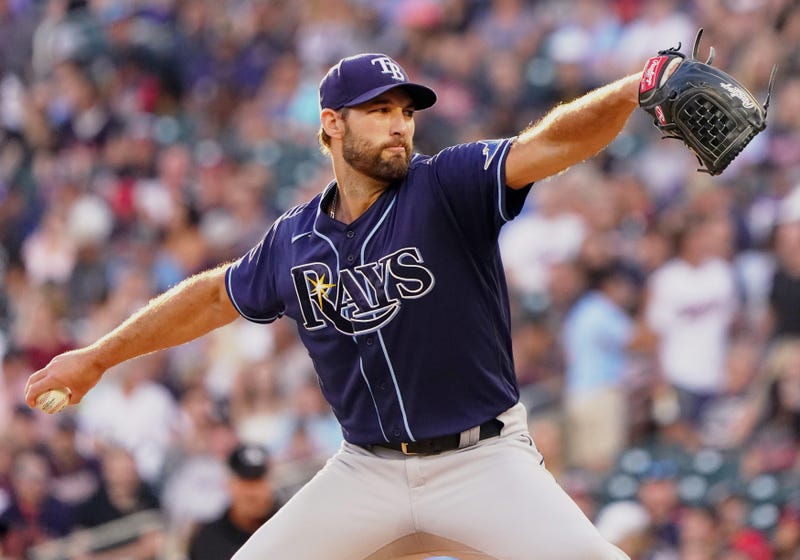 Major League Baseball has become a world of banking on players don't play to the back of their baseball cards, with the Red Sox being at the front of that line.

Teams see something in a player - particularly something buried in some sort of advanced analytics - and they pay for the right to prove their discoveries.

The strategy did pay off in key spots for the 2021 Red Sox. Kiké Hernandez had close to his best season (2018 night have been slightly better). Hunter Renfroe broke out. And Nick Pivetta proved one of the best success stories in this regards.

But it can be a dangerous mindset to lean on, with pitchers like Martin Perez and Garrett Richards teasing with impressive runs, only to land back in the uncertain world they came from.

Speaking with the media Saturday afternoon, the newest Red Sox explained how Chaim Bloom and Co. were drawn to the guy behind the guy. Forget an ERA that landed at 5.05. This was a pitcher who has already thrived on the kind of evolution the Red Sox crave.

"I don't know if they got too much into what they want me to do in the future. But, you know, they did express how they liked my willingness to adapt and to change and my competitiveness to make adjustments out there in the middle of the season and not just keep rolling with things that aren’t working," Wacha said. "They thought that was a good quality. But, you know, they were kind of just talking about their club and their approaches to the game and how they want their guys to be themselves out there and play at that level. The conversation with them was great. Both great guys, obviously great baseball coaches and looking forward to keep on learning more about them and getting to getting to work with them here in the future."

Just look at the game log for Wacha throughout 2021 and you will find what he was talking about.

In the righty's last seven regular season appearances (6 of which were starts), he 2.88 ERA and .167 batting average against. The difference? Well, go back to April and you would have found a pitcher who threw his cutter 150 times (his most prevalent pitch) while offering just 15 curveballs. In September, the cutter was used a total of 10 times with Wacha breaking out his bender for 49 pitches.

"Throughout the year, you know, I was pitching and I felt like, the cutter just didn't have the consistency that I wanted it to," he said. "And so, you know, just kind of scrapped that and started mixing in the curveball and I felt like the curveball, it was a lot slower than the cutter and so it felt like you know, it was a big difference from my other pitches, and so it felt like it kept hitters more off-balance. It ended up being a pitch where people would either take it and it’s still a strike for them or you know, it'd be a week contact and then it helps that fastball play up and so towards the end of the year I ended up throwing that more, mixing that in more, and you know, started to have some more success.

Mixed in a little two-seam as well. You know, just to play off the four-seam more, the two-seam had some arm side run and got a few broken bats and some weak contact with that pitch as well. But, you know, I'm always continuously learning myself and making adjustments to where I can become the best version of myself. And, you know, just moving forward with that into the offseason, I'm gonna continue working on those pitches, but also getting that cutter back to where I need it to be, where it's more consistent pitch against righties and lefties. And then yeah, the changeup, it plays, no matter what so it's it's a good fit for me."

Wacha added, "It was looking at the charts and seeing what was getting hit what was the highest average against certain pitches and where they were, and just the feel that I had with that cutter, it wasn't quite where I needed it to be for it to take me to that next level. But after a few times of throwing that curveball in there and seeing the reaction from the other lineups, we kept adding more and more to it and it ended up paying off."

This sort of story has landed in positive places before. There are plenty of examples. And while the investment ($7 million) would have seemed to be aggressive considering it is more than doubling what Wacha received in 2021, it is another example the Red Sox have no hesitation in investing in upside.

When it comes to teams looking at solutions, it's a brand new world. As Wacha and the Red Sox reminded us once again, the back of the baseball card isn't what it used to be.