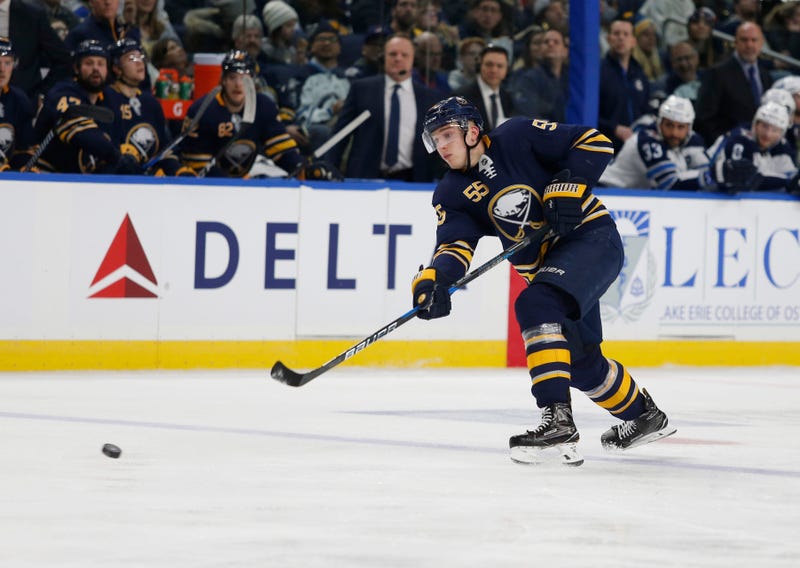 The Buffalo Sabres have already had an active offseason with the addition of a number of players to re-tool for the 2019-2020 season.

The Sabres have made a few depth signings for both the NHL roster and the Rochester Americans, with the main piece being Marcus Johansson.

Buffalo also made a few trades this summer to acquire forward Jimmy Vesey from the New York Rangers, as well as defensemen Colin Miller from the Vegas Golden Knights and Henri Jokiharju from the Chicago Blackhawks.

With the acquisitions of Miller and Jokiharju, the Sabres have started to get log-jammed on the blue line, especially on the right side. Buffalo already has a number of NHL caliber players on the right side of the defense, but none bigger than Rasmus Ristolainen.

The former first round pick (eighth overall) in the 2013 NHL Draft has already played in 424 NHL games as a 24-year-old, scoring 36 goals and 194 points over the course of six seasons in Buffalo. Ristolainen brings plenty of spark to his game on the blue line, can bring a physical edge in his own zone, and has proven to be a suitable offensive defenseman who can play some key power play minutes. However, the biggest questions lie in his decision making and if he can be reliable enough in his own end to be a dependable shut down defenseman.

With all the offseason moves made by the Sabres, the thought of possibly trading Ristolainen continues to grow by the day.

The Sabres have had plenty of time to watch Ristolainen and get a sense of what he can bring to the ice every game. However, he has yet to be part of any winning culture in Buffalo, which adds to the narrative that a change of scenery may be what's best for the Finnish defenseman.

Ristolainen's name has been out on the trade market quite often this offseason with a number of possible teams being interested in the right-shot defenseman. Teams like the Tampa Bay Lightning, Edmonton Oilers, and Anaheim Ducks have been rumored to have been in possible trade talks with the Sabres as they look to improve their rosters moving forward.

Another team that may have a link to a possible Ristolainen trade is the Winnipeg Jets, who have a sudden need on defense for right-shot defensemen.

Jeff Hamilton from the Winnipeg Free Press joined the Howard and Jeremy Show on Wednesday and says that while there is nothing solid yet on the Ristolainen talks, there seems to be something swirling that connects the Jets to the Sabres.

"It's been all rumors. If there's anything that the Jets are really good at is dousing those flames and trying to put those out as they try to work behind the scenes. It's been an interesting offseason for Winnipeg," Hamilton said on WGR. "Certainly Ristolainen has been a guy that's been rumored in this neck of the woods. Jake Gardiner has also been a guy that the Winnipeg Jets have been interested in and have kind of pushed the buttons on. They're really looking for guys that fit into that Tyler Myers range for what they had before ($5.5 million AAV)... A guy like Ristolainen making $5.4 million a season, he's the kind of guy that would certainly fit in that group."

It would not be the first time that the Sabres and Jets have made a trade with one another with defensive pieces going both ways.

The Jets have had some pretty solid assets on the blue line over the past few seasons, but it has not led to anything more than an appearance in the Western Conference Final against the Golden Knights in 2018.

Last season, Myers was still in the fold with the Jets, as was right-shot defenseman Jacob Trouba. However, Myers decided to leave the organization via free agency to sign with the Vancouver Canucks, and Trouba was traded to the New York Rangers in exchange for defenseman Neal Pionk and a 2019 first round pick.

Hamilton points out that this year's crop of right-shot defensemen in Winnipeg is going to look very different from the group that occupied the blue line in the 2018-19 season.

"It got to a point where Tyler Myers was frustrated being on this team because it was just such a crowded right side. He was competing for ice time with Jacob Trouba and Dustin Byfuglien, two pretty premier right-[shot] defensemen in the league. Now you look at it, and it's quite different," Hamilton said. "You look at a guy in Neal Pionk - who you got back in the Jacob Trouba trade - he still needs a contract. He's a little bit of an unproven guy; had a bit of some offensive flash but his defensive deficiencies were just as glaring. Then you look down the lineup at Sami Niku, who won the AHL Defenseman of the Year a year ago. He's a guy you'd certainly think would be able to slot into that position, but I don't think he's a top-four defenseman yet.

"The Winnipeg Jets need to figure that out. This is a team that hasn't been defensively strong for the last couple of years, particularly last season they just kind of seemed to fall by the wayside... I think a guy with experience, with some offensive upside but also an all-around player would bring the Jets back to where they used to be. Right now, they're not scrambling, but they're certainly looking for that spot."

The Jets could use some help on the right side of the blue line if their plans heading into the season involves just Byfuglien, Pionk and Niku. That's where Ristolainen may be able to slot in for the Jets.

However, the next question that comes up in a possible trade it what will the Sabres be asking for in return.

The Jets currently face a situation where they have a little less than $22.9 million in cap space available to them, but they have to re-sign a few big restricted free agents on the roster. Among the names that need new contracts moving forward are forwards Patrik Laine and Kyle Connor, who are both expected to get substantial raises in their next deal. Pionk is another player that needs a new deal on the blue line, as does depth forward Andrew Copp.

One name that has come up as part of a possible return for the Sabres is left winger Nikolaj Ehlers. The 23-year-old is about to enter his fifth season in the NHL, and is just one year into his seven-year, $42 million contract that he signed before last season with the Jets. However, his offensive upside may be a good fit for the Sabres moving forward, especially as part of the top-six forward group.

"I find that to be an interesting conversation only because he fits the Jets' needs," Hamilton said. "If it was to be a Ristolainen trade, I think Buffalo would have to add something to it. I don't know if the Jets are looking to get rid of a guy who, although struggled in the playoffs and hasn't scored a goal in 21 postseason games. That's obviously somewhat of a concern, but this is a guy that the analytics guys love, he drives play, and he's one of the few players in the league who really has some great stats moving through the neutral zone with a ton of speed."

In his four-year career in Winnipeg, Ehlers has shown off his offensive flair with 90 goals and 199 points in 298 games. His best season arguably came in the 2017-18 campaign where he scored a career-high 29 goals and registered 60 points in 82 games.

Last season was a bit of a down year for the Danish winger as he dealt with some injuries, while also taking a dip in his offensive production with just 21 goals and 37 points in 62 games.

Ehlers has primarily played on the left wing throughout his NHL career, and the Sabres are already log-jammed on the left side. Buffalo already has the likes of Jeff Skinner, Conor Sheary, Victor Olofsson, C.J. Smith, Scott Wilson, Vesey and Johansson as options on the left wing. However, Hamilton believes that the Sabres can make something work if they can add a player of Ehlers' caliber.

"You look at Buffalo's roster and do they need another left winger? Not really. They're just as log-jammed on the left wing as they are at right [defense]," Hamilton said. "If Nikolaj Ehlers is it, I think that's something that the Sabres would work around or figure out. Any time you can add a legitimate top-six forward of Nikolaj Ehlers' skillset, you want that."

There has been some times that Ehlers has been able to flip to the off wing and play on the right side in Winnipeg. Hamilton believes that a switch to the right side is possible in Buffalo, but something that may not be a suitable long-term solution.

"It did happen in Winnipeg, but it was more of an emergency situation, an in-game adjustment if they wanted to add him to a different line or move him to the first line. It has happened," Hamilton said. "Obviously there is the advantage of playing on your off wing as far as driving into the middle, coming into your off wing. Those are skills that Nik Ehlers has. I know that's something that the Jets wanted him to do less of early in his career because he's not exactly the biggest guy, and coming up the middle isn't always a great recipe for staying healthy. The flexibility is there, but I don't know if I would lean on that."

If the Jets do elect to hold on to Ehlers, there would be other pieces in Winnipeg that may interest the Sabres in a possible Ristolainen trade. With the Jets' salary cap predicament, they may have to move on from a young asset like forward Jack Roslovic, a former first round pick in the 2015 NHL Draft. On top of that, Hamilton believes that a package involving Roslovic may have to include another higher-priced player to help relieve the cap even more.

"Jack Roslovic is a guy who has seen some time on the first power play unit, he has been up in the top-six for chunks of the season, but he has predominantly been in a bottom-six role and a guy who's kind of waiting to come into his own," Hamilton said. "He's certainly not the only piece in that conversation. I would add in another guy like Mathieu Perreault. He's a guy that isn't coming off his best season, but the numbers guys love him, he can add stability to the second power play unit... He's certainly a solid bottom-six forward."