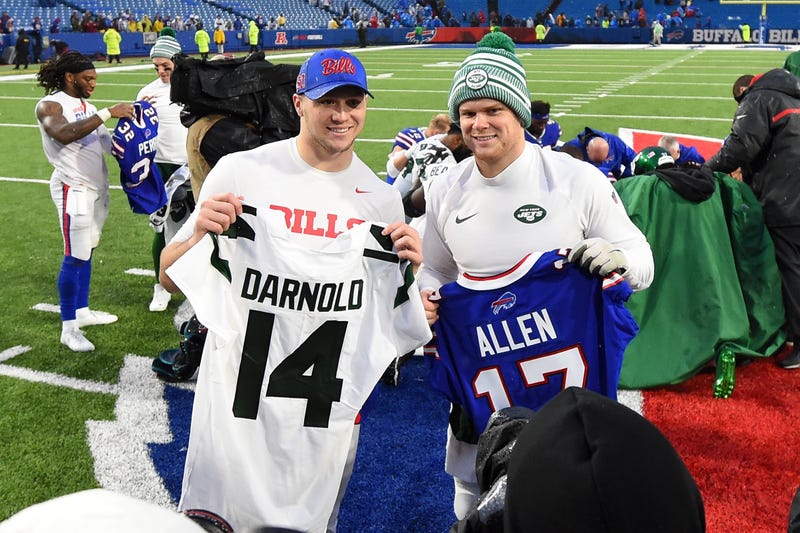 The Buffalo Bills are continuing on with their virtual offseason program as they are not allowed to practice on the field as a group in Orchard Park due to the coronavirus pandemic.

While the team is not able to get back on the field for the time being, the hope is that if all continues to go well with the trajectory of the re-opening of facilities across the country, the Bills could finally get back to on-field work when training camps start in late July.

In the meantime, the talk continues to surround the Bills and their chances of finally overtaking the New England Patriots this offseason as the best team in the AFC East. With the addition of wide receiver Stefon Diggs this offseason, the return of the entire starting offensive line, as well as the hope that quarterback Josh Allen continues to develop as a starting quarterback in the National Football League, the expectations of the Bills have never been higher.

RADIO.COM Sports NFL insider Brian Baldinger is one person who is high on the Bills heading into the 2020 season. He joined Jeremy White and Sal Capaccio on the Howard and Jeremy Show on Thursday to give his thoughts on the Bills, as well as his personal outlook of the AFC East as the season creeps closer.

Here is some of what Baldinger had to say:

Baldinger on the changes that the Bills have made on offense this offseason:

"What Brandon [Beane] is doing and what Sean McDermott is doing, everybody can see the improvement. They have not had a true No. 1 wide receiver with Josh Allen. That's what Diggs can do... He's going to see the opposition's No. 1 corner. He's going to see Stephon Gilmore twice a year, and he has the ability to beat No. 1 corners. He has beaten [New Orleans Saints cornerback] Marshon Lattimore, he's beaten [San Francisco 49ers cornerback] Richard Sherman. He's beaten a lot of  good corners in this league, and if he can do that, it's going to open things up for John Brown, Cole Beasley and the young tight ends and the young running backs."

Baldinger on Josh Allen heading into Year 3 in Buffalo:

"Josh Allen has to take a step, there's no question about it. They can't think about winning the division probably with the 23rd best offense. It's got to be better. I think this is a big missing ingredient that they have not had. A guy that's a really good route runner, can win 1-on-1s, can separate. Then there's the question of can Josh Allen deliver it consistently on target? He's got to get into the 60% completion now, and he's got to start connecting on some of the long bombs. We know he's got a big arm, but he's got to start connecting on some of these long passes. Otherwise, they're just long strikes and it puts you behind in the count when you miss throws that can be made."

"I'm a fan of Josh Allen. I like everything about him. I like his leadership, I like his toughness, I like his athletic ability. But at the end of the day, you're going to be judged by how you do in the playoffs; they were way up on Houston and  they collapsed, and then what are you going to do in big moments? Can you make the big throws in big moments? To come back and win a game? To come from behind? The way that we have watched [Kansas City Chiefs quarterback] Patrick Mahomes play, that's what everybody wants... That's where Josh Allen has got to get to."

Baldinger on the outlook of the quarterbacks in the AFC East this season:

"This whole division is being defined by young quarterbacks. It looks to me like Buffalo has done the best job, so far, of building around their young quarterback. Now you have to give the [Miami] Dolphins time. Certainly the [New York] Jets here under the new leadership of [general manager] Joe Douglas, that's what their emphasis is is to build around Sam Darnold. Buffalo is ahead of the pack right now. There's no question about it. To me, they're the front-runners, but the Patriots have owned this division, and until you knock them off and start beating them, it's still going to be their division. That's how I feel about Miami and the Jets as well."

Baldinger on the offensive stability of the Bills:

"Buffalo has been the one organization that has had the most stability, and all quarterback thrive when you give them stability. The Jets have changed coaches, changed general managers, and the offensive line has just been juxtaposed and maybe they get it right now. But you can see how Buffalo has just built the right way. They've done everything right. They took Josh, and they've never stopped building around him. That's what they should do."