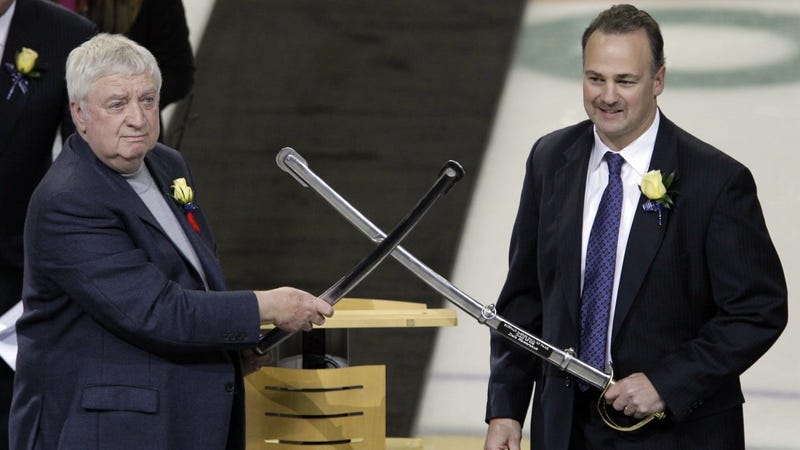 Former Buffalo Sabres forward and Hockey Hall of Famer Dale Hawerchuk has passed away after a battle with cancer at the age of 57.

His son, Eric Hawerchuk, confirmed the news via Twitter on Tuesday:

After an incredibly brave and difficult battle with cancer, our dad has passed away. My family is so proud of him and the way he fought. #HawerchukStrong pic.twitter.com/xZ1xcaqAOv

Hawerchuk was first diagnosed with stomach cancer back in September of 2019 when he took a leave of absence from his head coaching duties of the Barrie Colts in the Ontario Hockey League. In April, Hawerchuk had finished his first round of chemotherapy, but more than three months later was back fighting cancer after, what his son called, "a resurgence of this terrible disease."

The Sabres released a team statement on the passing of Hawerchuk shortly after the news had broke:

The Sabres have released the following statement regarding the passing of Dale Hawerchuk. pic.twitter.com/2HXMmaj9Ob

Hawerchuk spent five seasons with the Sabres from 1990 to 1995 after being acquired in an offseason trade with the Winnipeg Jets. In 342 games played in Buffalo, Hawerchuk scored 110 goals and registered 275 assists for 385 points. His 275 assists with the Sabres ranks him ninth overall in franchise history. In the playoffs, Hawerchuk managed to put up 34 points (9+25) in 30 games.

In his 16-year NHL career with the Jets, Sabres, St. Louis Blues and Philadelphia Flyers, Hawerchuk went on to score 518 goals and rack up 891 assists for 1,409 points in 1,188 games. He was the first overall pick of the Jets in the 1981 NHL Draft, was the Calder Trophy winner in 1982 as the NHL's Rookie of the Year, and was also a Second-Team All-Star in the 1984-85 season. However, he was never able to win a Stanley Cup in his illustrious career.

In 2010, Hawerchuk became the head coach of the Colts in the OHL, where he served as both the bench boss and the Director of Hockey Operations. He served in those roles until his leave of absence this past September.

“The National Hockey League mourns the passing of Dale Hawerchuk, an instant and enduring star who captured the hearts of two hockey-loving cities, represented his country with class and distinction, and is one of the most decorated players in our game’s history," said NHL commissioner Gary Bettman in a league statement.

“A prodigy almost from the moment he first donned skates in his native Toronto, the precocious Hawerchuk immediately dazzled at every level – from a legendary performance at the Quebec Pee Wee Tournament to leading Cornwall to his first of two Memorial Cup titles as a 17-year-old to being named Memorial Cup MVP and Canadian Major Junior Player of the Year in 1980-81. Selected first overall by Winnipeg in 1981, he won the Calder Trophy to commence a brilliant, nine-season career with the Jets that ultimately led to his No. 10 being honored by both the Jets and Coyotes. For his second act, upon being traded to the Sabres, he produced five superior seasons in Buffalo, where he also is considered a local hero.

“A revered leader whose commitment to charitable causes was tireless, Hawerchuk also was a force on the world stage, playing a pivotal role for Canada in both of its 1987 and 1991 Canada Cup triumphs. Inducted into the Hockey Hall of Fame in 2001, Hawerchuk was in the midst of a similarly successful post-playing career as a coach and director of hockey operations of Barrie of the OHL when he became ill and was taken from us far too soon. We send our condolences to his wife, Crystal; their three children, Ben, Eric and Alexis; and countless teammates and fans who were fortunate enough to see him play and call him a friend.”