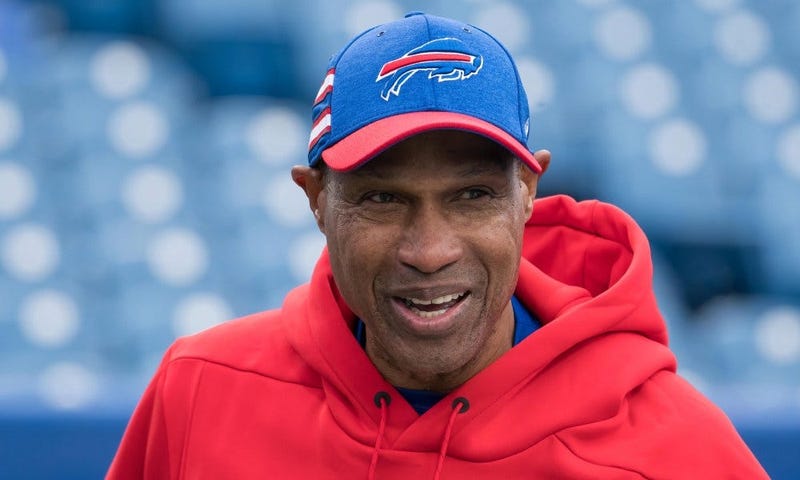 There are three different segments to an NFL season. The preseason, regular season, and postseason.

Players and coaches always say how different it is to go from the preseason to the regular season, as far as speed of the game and intensity. Then there’s yet another step up to playoffs.

I asked Buffalo Bills head coach Sean McDermott, who’s coached in 26 playoff games as an assistant or head coach, including two Super Bowls, what he’s learned about the playoffs and preparing for them over the years, and asked defensive coordinator Leslie Frazier, who’s played in and coached in plenty of playoff games and won a Super Bowl as both a player and assistant coach, how the week is different.

Here’s what each had to say:

“It’s just an entirely different atmosphere around the building. The fact that everything shrinks. You're the big fish in the pond now. When we play this Saturday, we're going to be the only game that's going to be shown. That's not the case during the first 17 weeks of the season. So, it's unique in that way. All eyes are on you and people that haven't had a chance to watch you during the course of the year, get a chance to finally see what your team is all about. It's just completely different and what you're playing for this time of year is kind of really crystallized now. You're in the tournament for the world championship, and that means a lot. So, the emotions and all the things you maybe dreamed about as a young kid growing up, to be in this position, and as we all know in this room, there are a lot of guys that play for a long time and never get to this position. So, to get to the playoffs and have this opportunity, it kind of reshapes things in a lot of ways. Really an exciting time for our players.”

McDermott on preparation:
“I just think it's important that you stay consistent from a leadership standpoint, from a routine standpoint for coaches and players, quite honestly. And then we double down on the philosophy of what wins. Just the experience that I've been fortunate to have through 26 games is just using all that experience and kind of the knowledge and intelligence that I've gleaned from it to help us as we continue to move forward as an organization, probably the biggest thing that will try and put into place this week.”