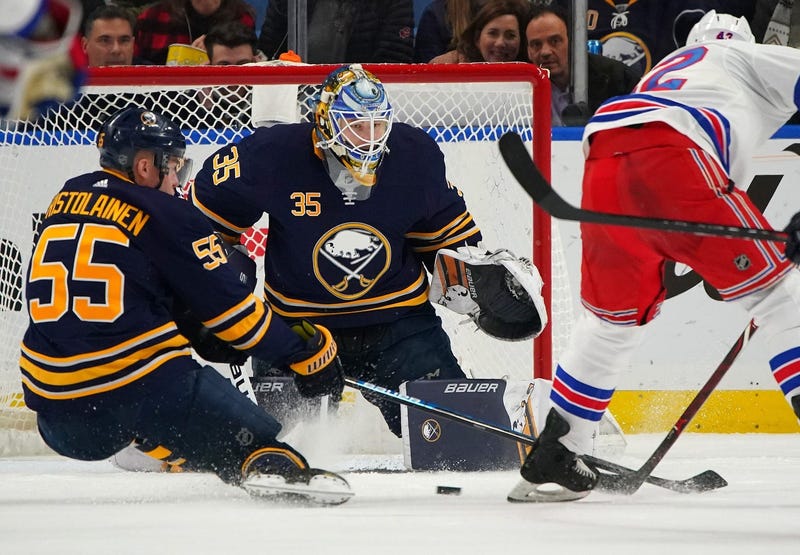 The New York Rangers were able to score early in the first period and never looked back in their 6-2 win over the Buffalo Sabres on Friday night at KeyBank Center.

Buffalo went to the power play less than a minute into the game when Adam McQuaid was whistled for interference. However, the team failed to take advantage of the power play chance.

Boo Nieves broke the scoreless tie early in the first period, giving the Rangers a 1-0 lead. The goal came on a delayed penalty call and was assisted by Brendan Smith. It is Nieves' third goal of the season, and came just over four minutes into the game.

The Blueshirts' lead was extended to 2-0 later in the first when a shot from the point made it through traffic and was deflected into the net. Jesper Fast was able to re-direct the puck on the way to the goal for his eighth goal of the season. Vladislav Namestnikov took the shot from the blue line to record the primary assist. Tony DeAngelo was credited with the secondary assist on the score.

Jeff Skinner cut the blue and gold's deficit to a goal less than a minute into the second period with his 35th goal of the season. The forward was able to corral the puck in the slot and beat Alexandar Georgiev to get Buffalo on the scoreboard. Jason Pominville was given the lone assist on the score.

However, the New York lead was extended back to two goals, 3-1, less than a minute later. Jimmy Vesey was able to get to the side of the net and slam home a pass by Pavel Buchnevich. Kevin Hayes also was credited with an assist on Vesey's 13th goal of the season.

Skinner's second goal of the night came on the power play, and once again narrowed the deficit to a goal, 3-2. His 36th goal of campaign was assisted by Sam Reinhart and Rasmus Dahlin.

Buffalo dominated much of the third period, but failed to capitalize and get the game-tying goal. Instead, Buchnevich's 11th goal of the season doubled the New York lead to 4-2 with four minutes to go in regulation. Just seconds later, the puck bounces off of Linus Ullmark's stick and right to Namestnikov to make it 5-2. He would also add an empty net goal to secure the 6-2 win.

The blue and gold head out on the road on Sunday to take on the New Jersey Devils at six o'clock on the flagship home of the Sabres Radio Network - WGR Sports Radio 550. Pre-game coverage with Brian Koziol begins at 5 p.m.