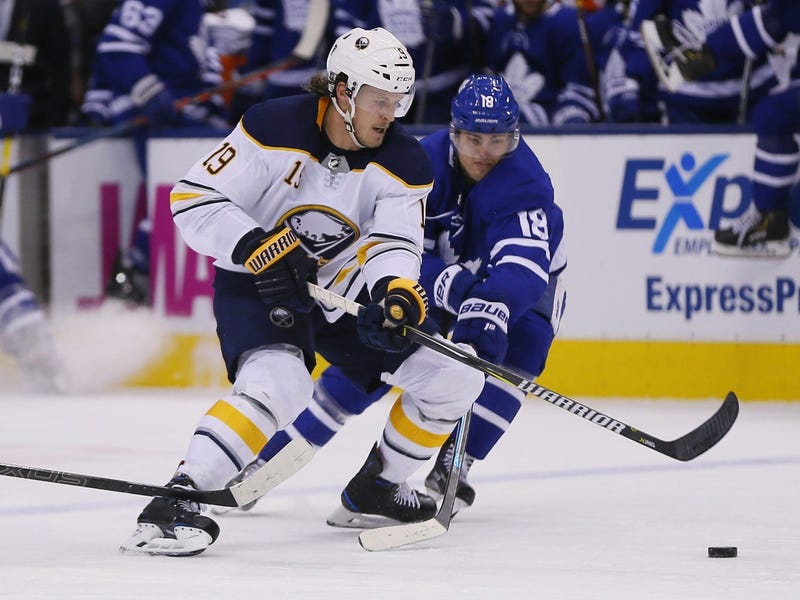 Buffalo, NY (WGR 550) - The Sabres have avoided arbitration by signing Jake McCabe to a two-year, $5.7 million deal. The cap hit for McCabe is $2.85 million and puts the Sabres over the NHL Salary Cap by just over $500,000. Linus Ullmark’s arbitration award will up that number.

In my mind, Botterill created this cap mess by brining back Johan Larsson and Zemgus Girgensons, which added $3.15 million to the Sabres cap.

There are ways to get out of this. The easiest is send Lawrence Pilut and somebody else to Rochester.

The next solution would be make a few trades, but it would have to be dollars in and dollars out.

Another solution is once Linus Ullmark’s arbitration is settled, the Sabres get another buyout period. They could buyout Vladimir Sobotka, which would cost the Sabres $1.5 million on the cap this season and $1 million next. That would save them $2 million this season.

Buffalo would save $4 million on this year’s cap by buying out Zach Bogosian. He would cost them $1,142,857 against the cap this season and $2 million next year. Buffalo could also put Bogosian on long-term IR in which his salary would not count against the cap.

news
Here's how your dog can wind up on Budweiser's upcoming beer cans
news
Ivanka Trump receives 2nd COVID shot: ‘Getting fully vaccinated is the best way to end this pandemic’
music
How much would you pay to own Kurt Cobain's hair?
music
Bed of Rosés: Jon Bon Jovi now has candy to go with his wine
music
Garth Brooks' Salt Lake City stadium show sells 50,000 tickets within half an hour of going on sale
music
Sam Hunt fills us in on his favorite memory with Mom and when we can expect new music