There seems to be some growing chatter on whether or not Saquon Barkley should remain with the New York Giants in 2022.

The 25-year-old running back is set to enter his fifth-year option and make $7.2 million next season, but the team also needs to free itself some salary cap space. About $40 million, new general manager Joe Schoen recently told Peter King of NBC.

If the Giants do not see a long-term future with Barkley and Daniel Jones (Schoen has said publicly they will build an offense to accentuate Jones), it is plausible that New York could explore the trade market for Barkley, the former No. 2 overall pick in 2018.

Barkley’s career has been plagued by injuries, which hurts his value for the Giants' sake, but everyone is well-aware of his potential and natural talent, and with the right team, he could reach that potential and set himself up for a big payday in 2023.

If the Giants do trade him, here are some teams that could be a fit for the running back: 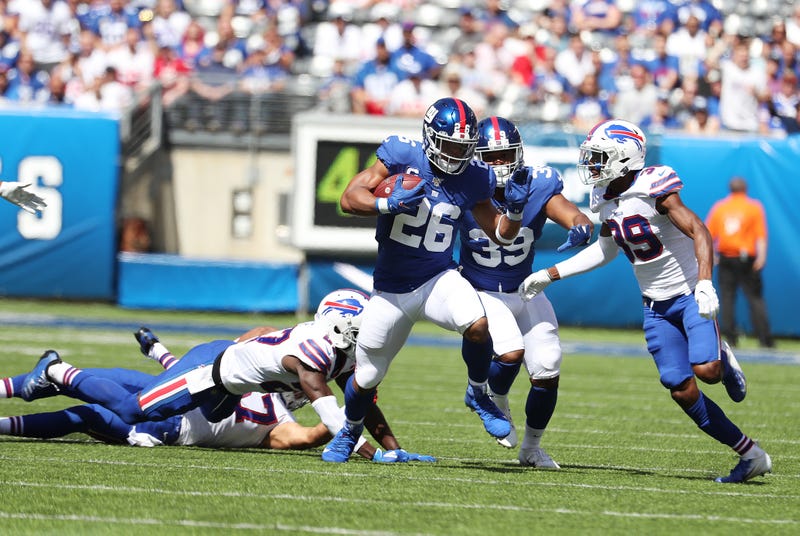 It would make a ton of sense, right?

The connection is there, as Schoen joined the Giants from Buffalo, so he already has an established relationship with Bills general manager Brandon Beane. Buffalo is looking to fortify its team, so it can get over the hump and reach the Super Bowl next season. An addition like Barkley would certainly help.

Sure, the Bills have Devin Singletary, who had a strong finish to the season, but Barkley can be the feature back while Singletary serves as a change-of-pace back. That would give the Bills depth, in addition to bolstering their talent in the backfield.

Plus, Buffalo would be a good fit from Barkley’s perspective, too, going from Daniel Jones and an underwhelming offense to Josh Allen and one of the best offenses in the league. It will only boost his earnings potential in free agency. 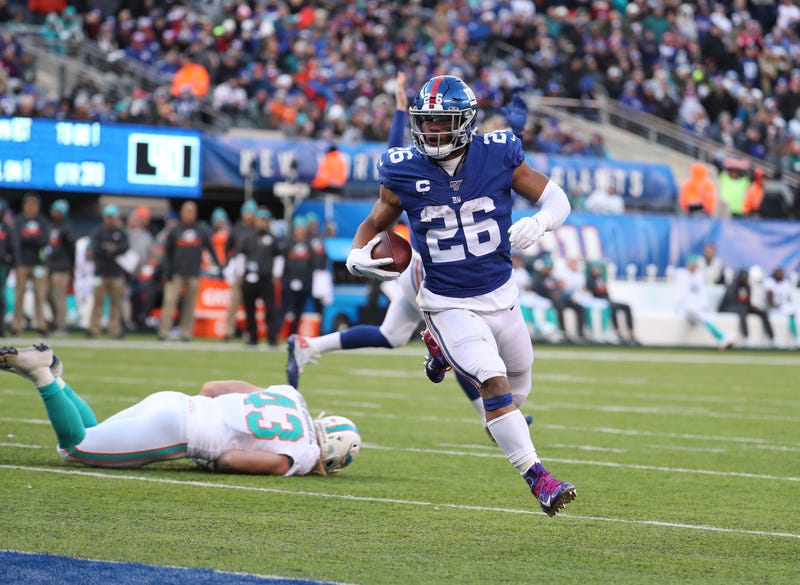 The Dolphins have a ton of cap space and are in the market for a running back. New head coach Mike McDaniel will want to get his hands on a talented running back who could also serve as a pass-catching back in the backfield with Tua Tagovailoa dumping off passes to make a big play. Barkley fits that mold and could add a spark to the Miami offense. 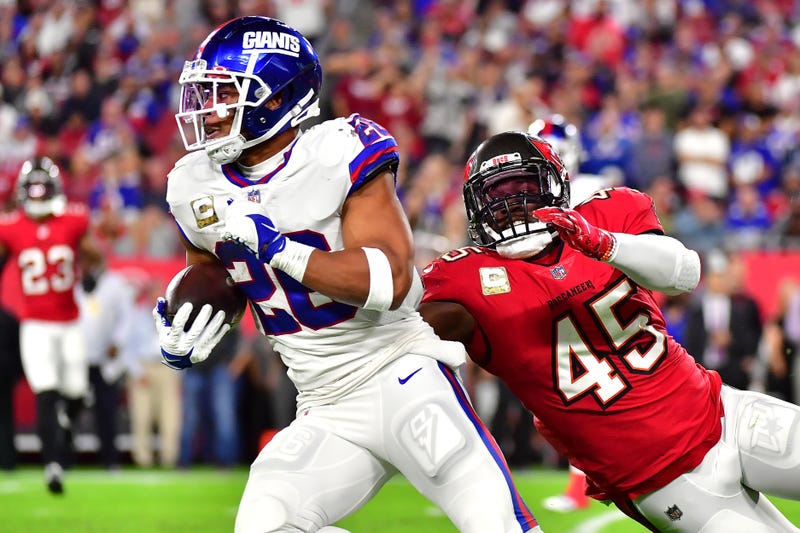 The Buccaneers lost Tom Brady to retirement, and could lose Leonard Fournette and Chris Godwin in free agency, meaning the team will be in great need to add a playmaker to the offense this offseason.

If the Buccaneers can land a decent quarterback and swing a trade for Barkley, they can continue to be contenders in the NFC South.

Tampa Bay has a strong offensive line, too, which would be something Barkley has never really experienced, and could be a great fit for him to reach his potential. 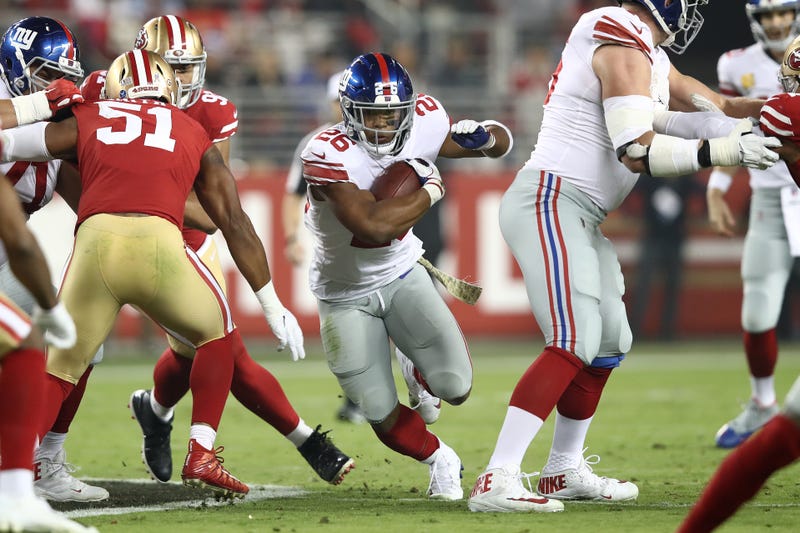 Imagine Saquon Barkley in the 49ers offense with Deebo Samuel?

Prior to the Super Bowl, ESPN NFL reporter Jeremy Fowler opened the door to that possibility, mentioning the 49ers as a potential trade partner for the Giants if they were to deal Barkley.

The 49ers’ primary focus this offseason will likely be finding a quarterback to replace Jimmy Garoppolo with. However, if they can upgrade at quarterback and add Barkley — a dual-threat back — to an offense filled with all sorts of weapons, Kyle Shanahan’s team could very well be the early favorites in the NFC to reach the Super Bowl. 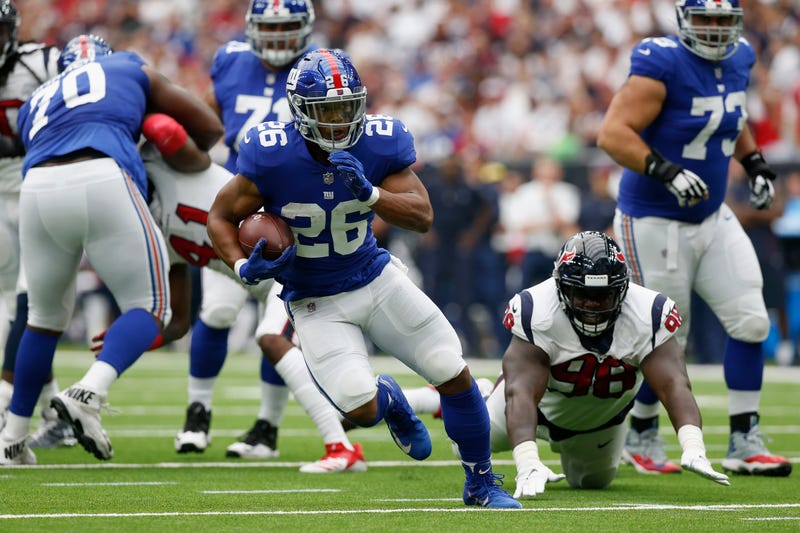 The Texans are another team with ample cap space this offseason and a need to fill at running back. If the Giants move on from Barkley it likely means they are not committed to Jones for the future, and Houston just so happens to have a stud quarterback it is trying to trade in Deshaun Watson.

A deal involving Barkley and Watson would be an absolute blockbuster, but it should also be noted that it is also likely a longshot. While the Texans make sense as a fit, Giants owner John Mara has publicly stated that the team has no interest in Watson, who comes with a bag of controversy as he faces 22 civil lawsuits alleging sexual misconduct or assault.

Anything is possible in the NFL, so we’ll keep the Texans on this list as it makes sense, logistically speaking, but just know the likelihood is probably very low.