Here are my Arrows, starting Down after the loss: 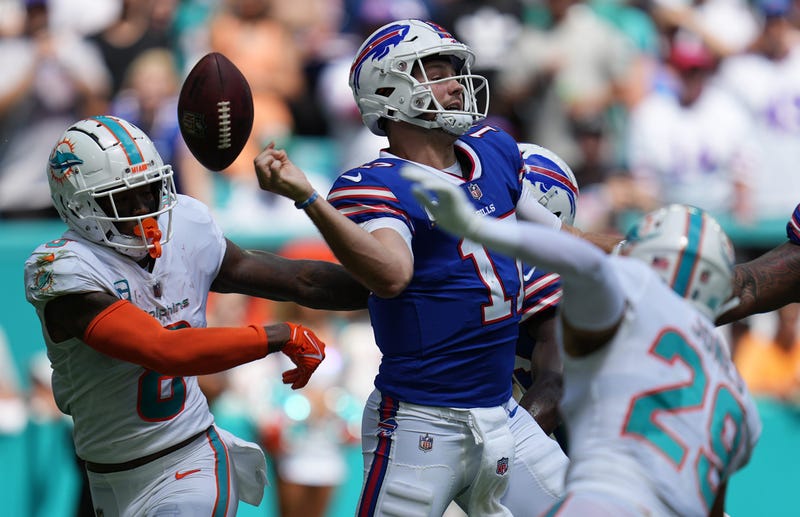 The Bills lost, yet, another game that was decided by only one score. Going back to last season, this has been an issue.

There are a lot of reasons to point to, or theories to have, but it happened again, and it’s something they’re going to have to prove they can overcome.

Damar Hamlin and Jaquan Johnson were in coverage on the back end. There’s no reason that should happen, but it did.

The Dolphins scored a touchdown, and never gave the lead up.

Gabriel Davis not completing the touchdown

With 3:50 left in the third quarter and the Bills at the Dolphins' 11-yard line, Josh Allen hit Davis for a would-be touchdown. Even though Davis had both feet down inbounds, as he turned, he had the ball knocked out of his arms and didn’t complete the catch.

The Bills settled for a field goal and missed out on four points.

Bills kicker Tyler Bass missed a field goal from just 38 yards out. Whether it was a snap that could have been better, throwing off the timing, or a hold that was off, or just Bass missing it, it turned out to be a huge missed opportunity for three points in the fourth quarter.

End of first half

The Bills were looking to spike the ball to stop the clock at the end of the first half. However, Josh Allen bobbled the snap and, with only two seconds left, tried to make a play instead, throwing the ball to Stefon Diggs. It was a nine-yard completion, but the clock ran out, ending the half.

Brown actually left the game with heat-related issues, but the Bills' right tackle was repeatedly beaten while he was in.

The Bills pass rusher was held completely off the stats sheet, as far as tackles or sacks. He did have one pass breakup, but the Bills signed him to make plays in close games. They just didn’t come in this one.

Devin Singletary as a runner

The Bills ran for 115 yards and averaged 5.0 yards a carry, but Singletary was completely ineffective on the ground. He finished the day rushing nine times for only 13 yards (1.4 yards per-carry).

The Bills were inside the Dolphins' 20-yard line four times, even getting inside their 10-yard line each time, yet, only came away with two touchdowns.

The Dolphins were inside the Bills' red zone three times and scored a touchdown on each of those possession.

Of course, plenty had to do with not having several key offensive linemen and shuffling in-and-out as the game went on, but the Dolphins had 10 official quarterback hurries on Allen. Far too many.

One resulted in a sack and fumble inside the Bills' 10-yard line.

The Bills were penalized seven times for 52 yards, but a few were crucial points in the game.

One was an unnecessary roughness penalty on Jaquan Johnson that gave Miami a 1st-and-goal on, what would have been, a third down instead. Another penalty pushed the Bills back 10 yards on their final drive when they were just a few yards from Bass’ realistic field goal range, causing the final play.

With just 18 seconds left, Bills wide receiver Isaiah McKenzie caught the ball and tried to get out of bounds, while also trying to gain enough yardage for Bass to attempt a field goal. He never got out of bounds and was tackled at the Dolphins' 41-yard line.

By the time the ball was reset, the clock ran out on the Bills. 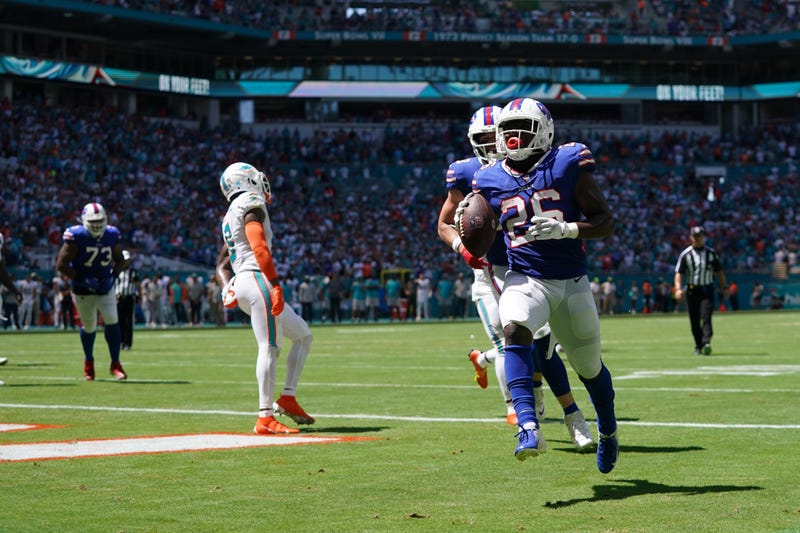 Allen, once again, made some sensational throws, and was trying to do everything he could to put his team in position to succeed, despite all the injuries and having a depleted offensive line in front of him.

He finished the day going 42-of-63 for 400 yards, two touchdowns, and no interceptions. He added 47 yards on the ground, finishing with 447 yards of offense.

Devin Singletary as a pass catcher

While Singletary didn’t have an efficient day on the ground, he did through the air, finishing as the Bills' leading receiver with nine catches for 78 yards and a touchdown grab.

McKenzie was a big factor on offense for the Bills, grabbing seven passes for 76 yards and a touchdown. He also added a six-yard run.

Moss only carried the ball four times, but had a terrific 43-yard scamper down the sidelines.

The Bills defense held the Dolphins to just 3-of-8 on third down conversions (37.5%).

The Bills faced a 4th-and-goal from the Dolphins' two-yard line on their very first possession. Head coach Sean McDermott elected to keep the offense on the field and it paid off with a touchdown pass from Allen to Singletary.

The Bills scored a touchdown on their first possession for the eighth-straight game.

Despite the heat and tough conditions, the Bills offense put together some huge, long drives, including four of them that went over 70 yards - an 83-yard drive, and a whopping 20-play, 92-yard drive that took 9:22 off the clock but ended only with a field goal.

Despite starting two rookie cornerbacks, having to play another rookie extensively in his NFL debut, a second-year safety getting his first start, and another backup safety, Dolphins wide receiver Tyreek Hill had only two catches for 33 yards on the day.

The three rookies did an excellent job all day. The Dolphins threw for just 171 yards, including Jaylen Waddle’s 45-yard gain that was more on the safeties than them.

They also combined for six tackles.

Rousseau was the best player on the Bills' defensive line, collecting three total tackles, including two for loss, 1.5 sacks and two quarterback hurries.

Photo credit Outlet Liquor
We strive to be a platform where varying opinions may be voiced and heard. The views, thoughts, and opinions expressed by the author(s) of this article and/or by those providing comments are theirs alone, and do not represent those of Audacy, Inc. We are not responsible for any damages or losses arising from this article and/or any comment(s).
Featured Image Photo Credit: Jasen Vinlove - USA TODAY Sports