Orchard Park, N.Y. (WBEN/WGR 550) - Nearly seven months after a deal was agreed upon by the Buffalo Bills, Erie County, New York State and the National Football League for the future construction of a new stadium in Orchard Park, the team officially released renderings for the facility to be opened by the fall of 2026. 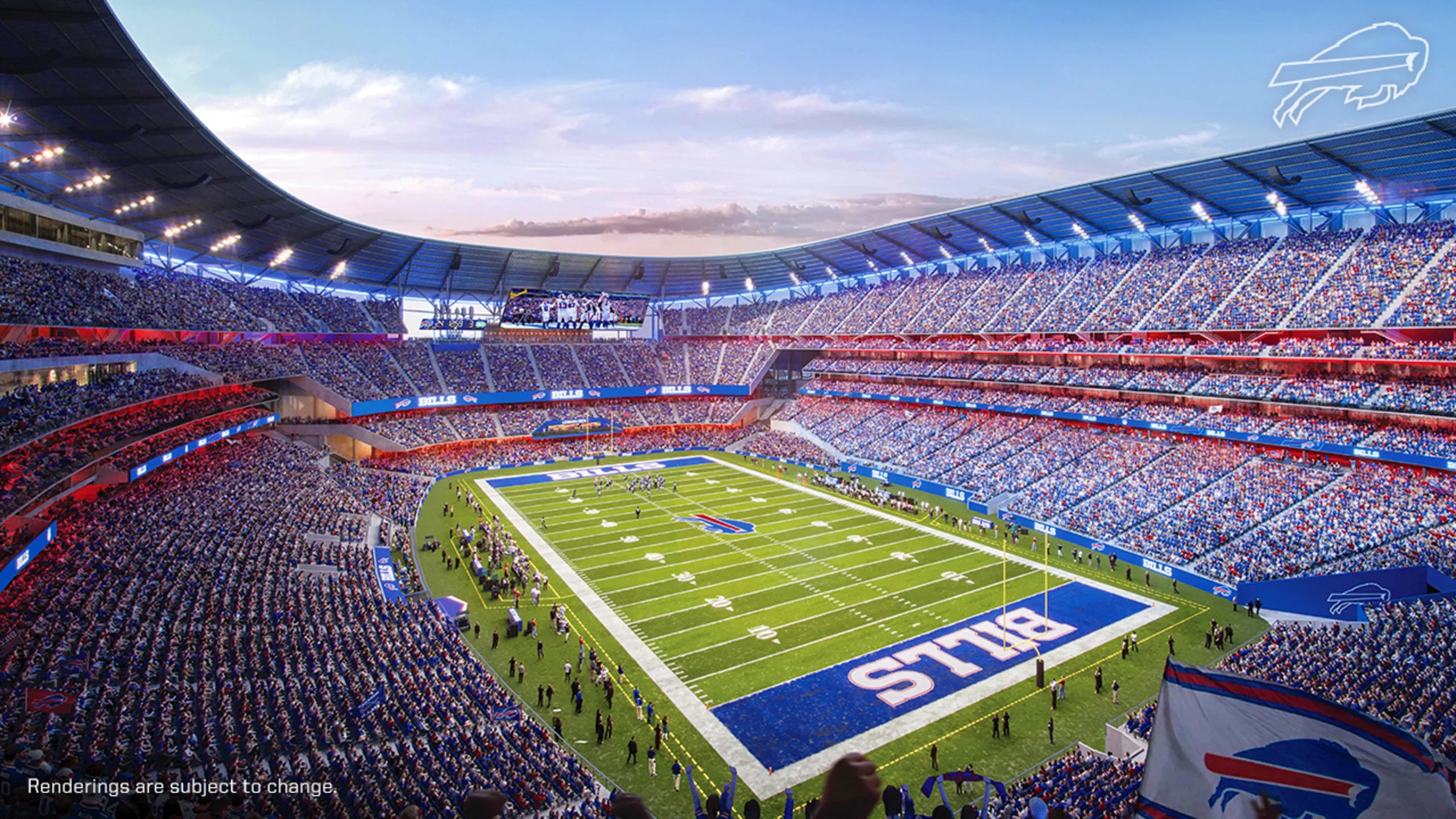 While there's still the process of finalizing a number of documents and agreements as part of the Memorandum of Understanding with the stadium deal, it gives Bills fans and other members of the Western New York community the first glimpse of what to expect of the new stadium when construction is completed.

Over the last several months, the design team with the NFL marketplace at Populous has been hard at work with the Bills and other members of the collaborative stadium group to establish the look and feel of a building that is not only fitting for the Bills on the field, but also a reflection of Buffalo itself.

"One of the things we heard loud-and-clear from ownership and from all the different operational groups within the team when we talked to them, was the building wanted to be about football first," said Senior Principal at Populous and leader for the NFL marketplace, Scott Radecic. "Some of the other recent designs in the NFL were really about buildings that had a lot of other multipurpose activities planned in them, and football was also going to be played in them. Their focus really wanted to be on the game of football, what it's like for the fans to be in the building, how intimate and intimidating and loud can we make the building, how great can we make the experience for the Buffalo fans. And then from the player's perspective, how do we create an environment that is a place where visiting teams hate to play when they come to Buffalo?"

"What's been really special about the evolution of the design has been a lot to do with the process, and working with the team and talking about what's most important to them, to the fans, and then how do you convert those ideas - a sense of belonging, family, a football first environment - the function and the efficiency of the building, the tightness, the intimidation, and bringing that all together to really create something that hasn't been created before in the NFL," added Senior Principal and co-leader of the NFL marketplace at Populous, Jonathan Mallie.

Populous has led the design process for the new stadium in Orchard Park with their architectural services and more. The globally-recognized design firm has also worked with their landscape architects, urban planners and interior designers to bring to the fans of Buffalo a one-of-a-kind experience inside-and-out.

"What we really see here is the resolution of the form of the building following the performance of the exterior systems, and how the team can ultimately perform inside the building," Mallie said. "The shape of it, reflected of managing the wind conditions, but then also getting into the materiality, in terms of the exterior perforated metal, which is up high and the real visible element from further away, but also the iron spot, tough brick along the base of the building, as people approach it in human scale. So it's sort of play of form and material that is really born out of all of the different performative aspects we're trying to achieve." 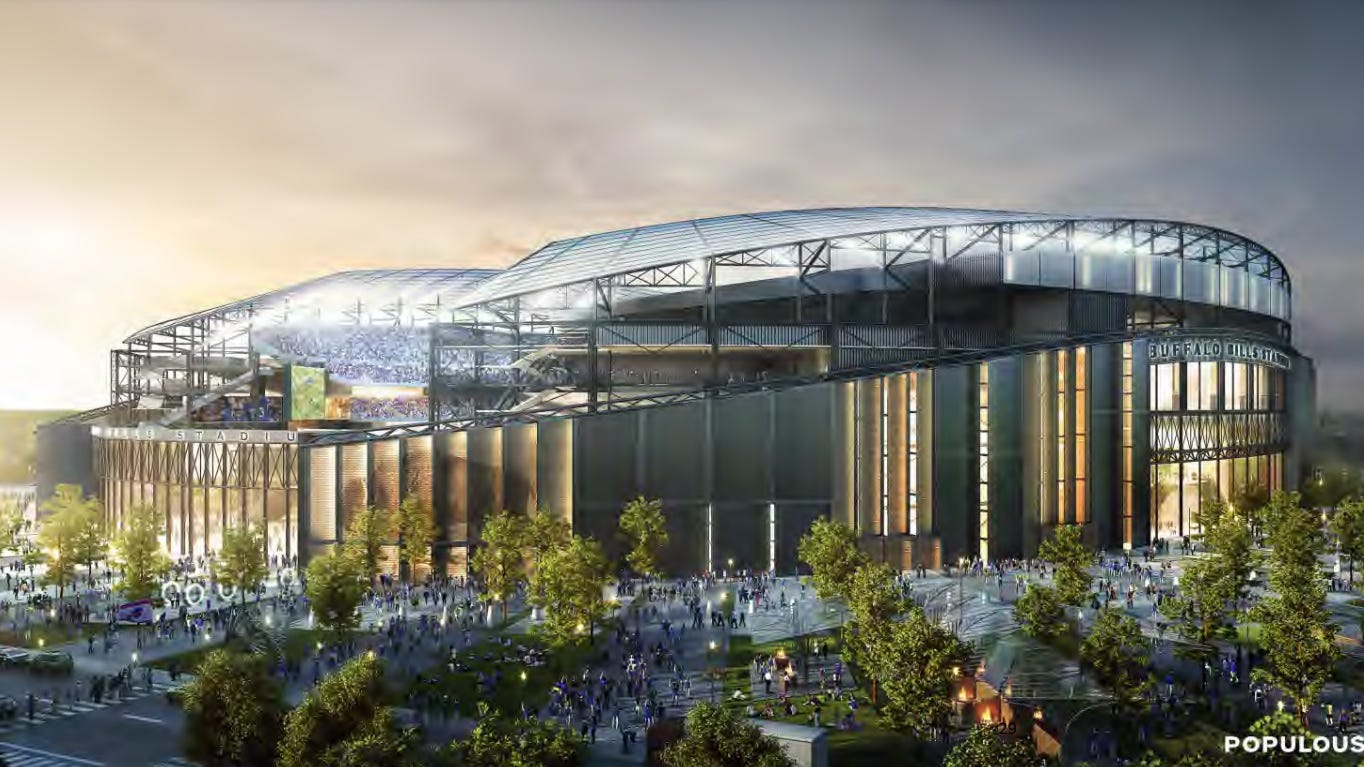 When approaching the stadium from the outside (coming from the Northeast in the rendering released by the team), what first stands out for fans is an sculpture depicting a family of buffalo that the team and Populous are considering, called the 'Family Circle'. According to Mallie, this will be the greeting for fans walking towards the stadium, and presents a bold and powerful look for the stadium, as a whole.

Meanwhile, the design of the exterior of the stadium will have some inspiration from the rich history of Buffalo architecture.

"Even the buildings in the late '30s and early '40s with 'The Rockpile' - War Memorial Stadium - and the Aud, and even Kleinhans Musical Hall provided some cues for the design, in terms of how we could connect to some of the elements, the stoic architecture from that period of time, but then also creating a modern, forward-thinking identity," Mallie said. "That's where the two, the past and the future, come together to create what we see here."

"We wanted to have a reflection back to the past, but really wanted the stadium to be something that propelled the team and the City of Buffalo into the future," added Radecic. "There's so much momentum in what the team has done over the last few years, and approaching the building in that way, those have been inspirations for the design team and for ownership when we first started to talk about this at the beginning of the year." 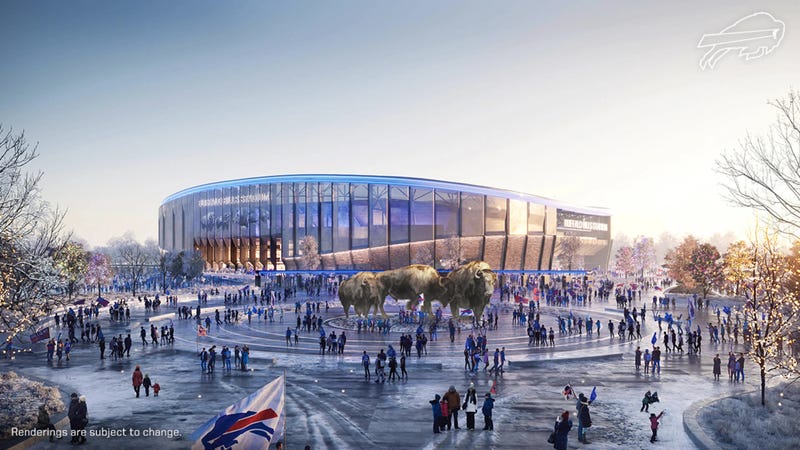 As we move to the interior design of the new Bills stadium, with the mindset of football first, the Populous team was focused on the tightness of the overall building, which means bringing everybody closer to the field and creating an outdoor environment with a visual and audible atmosphere that's second-to-none in the NFL for the Bills and their fans.

"The shape and form of the seating bowl, the proximity of fans to the field, and the stacking of the seating bowl in all areas of the East and West and North and South of the building, it was really important when we looked to the future, to provide ways to keep the fans as dry as possible, knowing that it was still going to be an outdoor stadium, because it's totally Buffalo to be playing outside, and also to keep them dry and keep them warm. That was important," Radecic said.

According to Executive Vice President of Pegula Sports and Entertainment Ron Raccuia, the roofing canopy will cover roughly 65% of the fans and protect them from the elements.

What else stands out about the design of the new stadium that's even got the design team at Populous excited? For Radecic, a former Bills linebacker from 1987-89, one of the aspects he loves for the stadium is a unique North end zone seating bowl for fans.

"Our team looked at ways to bring the fans as close and as low to the field as possible," he explained. "In the rendering that you see in the distance, there is a separated concourse for 2,800 seats that's only 12 feet vertically from the field. I'm not sure if there's another stadium in the NFL that has a concourse or a fan area that would be that low and close to the field. I think that whole North end zone is going to be a wall of fans that can provide some homefield advantage, and hopefully some intimidation to opposing teams." 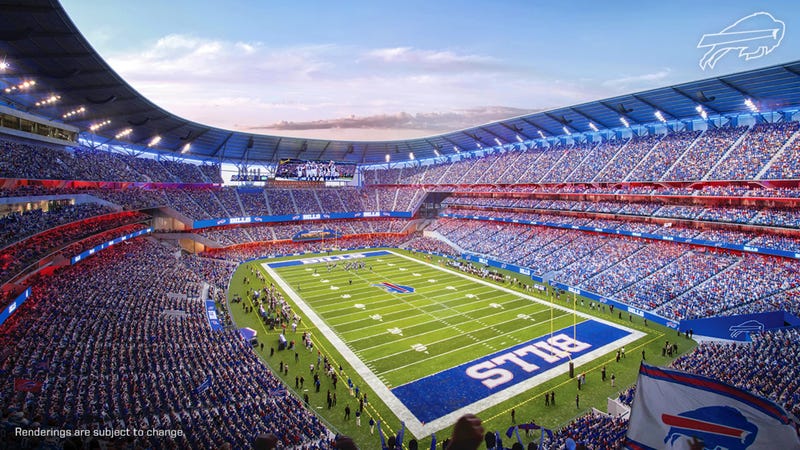 Another aspect Radecic points out that makes the new Bills stadium unique to the NFL is both concourses for fans to circulate will have a complete 360-degree view of the playing field.

"Right now, when you're at Highmark Stadium and you go to the concourse, you lose your visual connection to the field. But in this new stadium, both on the 100 level and the 300 level, as you circulate 360-degrees around the stadium, you are always visually connected to the field," Radecic said. "We've incorporated areas for hospitality and bars for fans at the 50-yard line and in both end zones, on all these levels so that we can create and support communal gathering as much as the fans want to do that, and still stay visually connected to the field."

As Bills fans wait on the other details of the stadium deal to be finalized, it will still be some time before shovels hit the ground and construction begins on the facility across the street from Highmark Stadium on Abbott Road.

In the meantime, it's possible for some of the nuances with the stadium design to change as the design team dives deeper into the process going forward. However, the major elements of the renderings presented on Thursday are not expected to change significantly.

"The visuals that we see are what we're absolutely striving for, and to the greatest extent possible, this would be the ultimate result of the design. But every design and every stadium project goes through evolution," Mallie said. "That doesn't mean you let go of the key drivers and the key ideas, and we think we have an incredible basis here, we're off to a great start. There's more design to come, and that's just what makes it that much more exciting."

There are many members of "Bills Mafia" and other football fans that have been to other stadiums around the NFL, and will certainly look into the details of the renderings and compare those to other facilities in the league. What stands up to a specific stadium? What stands out above other stadiums?

For both Mallie and Radecic, every design they try to come up with for a stadium will connect back to the brand. What they have seen, heard and learned from this experience is the Buffalo fan base is incredibly strong.

"They love their team, the team is doing incredibly well. When the fans walk into this building, they'll feel like it's home, and that's been a priority of ours from the beginning," Mallie said. "Every which place you turn, every experience that we're establishing and locating throughout the building will somehow connect with the fans that are moving through it. That's an exciting thing to design for."

"One of the primary goals and objectives of ownership and of the team was to create a place of pride for Bills fans and the people in Western New York and the City of Buffalo. Not just for today, but for generations to come, and be able to have an amazing experience, where everything has been thought of in order to help them have that to the highest level," Radecic added. 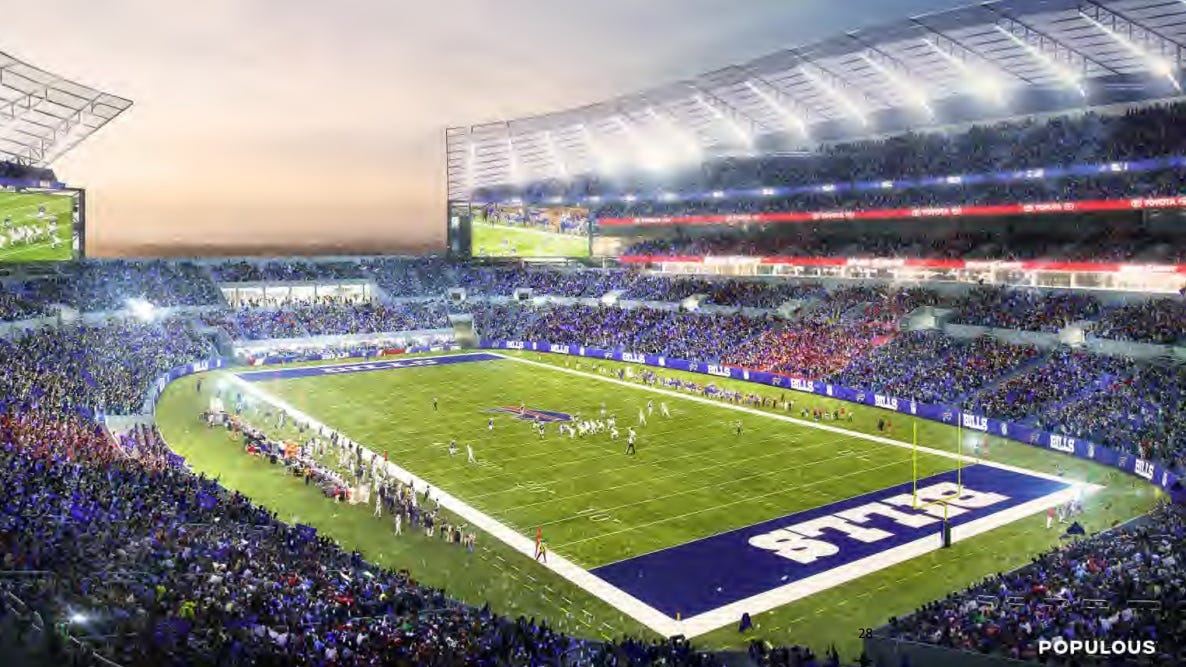 Hear more of our conversation with the stadium design team at Populous available in the player below: